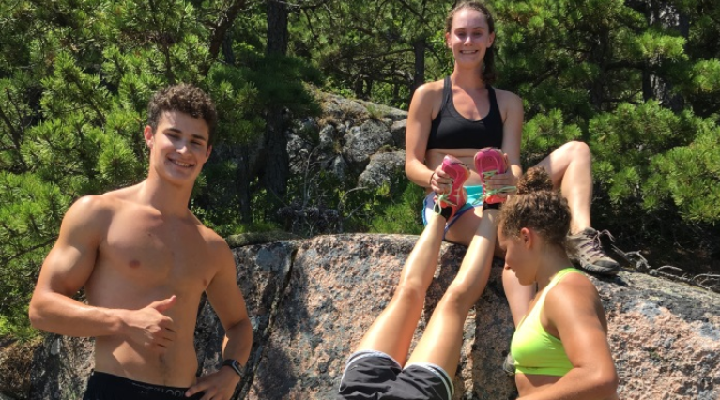 Trey was a founding member of the North Allegheny He for She club, an organization dedicated to gender equality.  He was also the President of the Ski Club.

Trey served as an instructor at numerous youth baseball and basketball camps.  He also participated in a shoe drive for the homeless.

During his high school years, Trey volunteered for Light of Life Ministries, Dayton Christmas Off-campus, and the United Jewish Federation.

Trey worked starting at age 13, first mowing lawns in several neighborhoods, then for 3 years at an Italian restaurant.

Trey is now a 20 year old sophomore at Ohio Wesleyan University, where he is a recipient of the Branch Rickey scholarship.  He is a diver on the Swim/Dive team.  Last year, as a freshman he won both the 1 meter and 3 meter competition at multiple dual meets.  In addition, he broke the school record for the 3 meter event that had stood for 43 years.  Trey is also on the Ultimate Frisbee team, as well as the Rugby team.  He also plays intramural basketball.

While at OWU, Trey serves as an instructor at a Swimming youth camp.  He also is a counselor at Camp OWU, assisting incoming Freshmen in their transition to college.  In addition, he worked at a bicycle store.

Trey is majoring in Business, and plans to get a degree in Financial Economics.

Trey began his diving career in high school, and recognized that there was a need for coaching in this sport at the youth level. While there is plenty of youth coaching in the multiple other sports that he participated in, there is very little in Diving.  Consequently, many high schools have a hard time filling their diving slots, particularly males.  Thus, a male who is proficient at diving stands an excellent chance of having success at the high school level.  Likewise, many college Swim/Dive teams lack sufficient numbers of male divers to fill their teams.  So, becoming proficient at Diving can be a relatively easy route to a college scholarship.

Although Trey has a busy schedule at college, he recognized that he could coach Diving remotely, on his time.  Thus, he could provide a much-needed service, while helping to defray the costs of his college education.  Hence, Diving Dynamics was born.

As stated above, I recognized a need in this field, and decided I could fill it.  With an extensive background in sports,  as well as in youth coaching, I put my nascent Business skills to use in developing a business plan for this start-up.  During my high school years, I listened as my parents and their friends often talked about the huge expense of a college education, and how they needed to find a way to get their kids college scholarships.  They would discuss various sports that seemed to present the best possibilities.  As I was applying to college, it became clear that many schools were desperate for divers, especially male divers, so that was the seed that planted in my brain to explore this option.

I have made videos of all of the basic dives at both the 1 meter and 3 meter levels.  I charge my students a fee to view these films.  Then, they upload video of them doing the dives, and I charge a separate fee for critiquing their dives.  So, there are various levels of charges, based on the level of service I provide.  When I reach a certain level of success, I plan to solicit and include advertisements in my videos, for products such as Speedo swimsuits and nutritional products.

How long did it take to become profitable?

Because my overhead is very low,  this venture was profitable as soon as I had a few clients.

When you started out, was there ever a time you doubted it would work?  If so, how did you handle that?

I have a great deal of confidence in myself, and always believe I will be successful in any endeavor.  I did think this was a great idea with a high chance of success.  I realize I have very limited business experience, certainly in terms of running a business, but I did believe I could learn quickly.  My biggest concern was obtaining clients.

Thanks to the Internet, it is easy to market nationally from anywhere in the US.  I am still exploring various sites that will increase my exposure.

What is one marketing strategy that is working really well to generate new business?

Having a nice-looking website helps.  I have gotten word out thru various sites, such as Ideamensch and Crunchbase.  I really believe my target market is not just youth but parents who are looking for a path to a college scholarship, so I have emphasized websites that cater to this demographic.

I wanted to add a high-end option of personal coaching, so that affluent parents could fly me to their location for some in-person coaching with their child.  As we have seen from the well-publicized recent college-admissions cheating scandal, affluent parents are willing to go to great lengths to get their kids into prestigious universities.  However, for now, my busy college schedule precludes my offering this service.

My dad always says that Life Takes Effort.  I have always been a hard-worker, in school, sports and the jobs that I have had.  I do believe that a reasonable amount of intelligent thought plus being willing to put in the necessary effort to bring that idea to reality has paid off for me.  In addition, I demonstrate to the kids, and their parents, that I really do care about them, and want to help them to achieve success.

Certainly just initiating a business on my own has been very rewarding.  I have to say though that I get my most satisfaction when one of my students nails a dive, and comes back to the surface beaming with pride.

What does the future hold for your business?  What are you most excited about?

Hopefully I can continue to grow my business and become profitable enough to pay for my entire college education.  Since I have established a niche in this business, I believe I can become a national well-recognized brand, which will afford me other opportunities in the business community.  I hope that I become successful enough that I can partner with some Olympic divers, to provide additional credibility and marketing power.

What is a recent purchase you have made that has helped you with your business?

There are no large capital expenditures associated with my business.  My best investment was hiring a professional to make my website look good.

Is it difficult to balance college life with running a business?

It can be challenging.  I have to be very well organized and budget certain time slots for classes, studying, sports and running the business.  I probably do not have as much time as I would like for just relaxing and socializing, but if the business becomes successful enough, I hope to hire some individuals to help with some of the components.