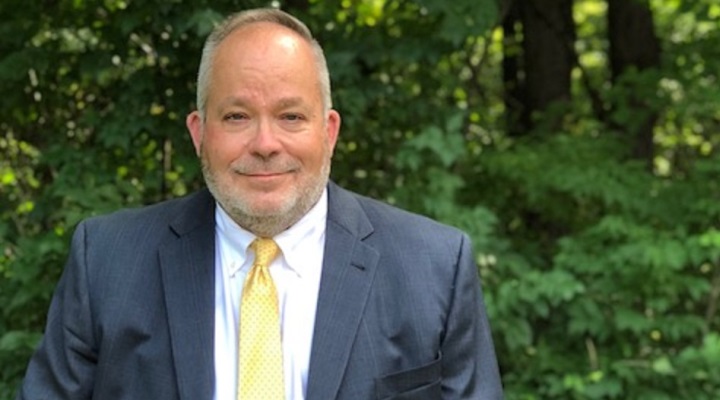 There are many educators who begin their professional careers by taking a position in the school of Hard Knocks, but not too many begin with such a colorful and dramatic change in life. Thomas Gaudreau chose a tough time to pursue a teaching career as a graduate of the University of Wisconsin – Eau Claire in 1982.

At the time of his graduation, schools in the state were going through financial difficulties. Teaching jobs were so far and few between that newly minted teachers were sent postcard indicating that there would not be jobs for beginning teachers and discouraged them from applying as their resumes would be immediately destroyed.

Not to be discouraged. Thomas Gaudreau continued to search for his path. His search led him to his first teaching adventure in the Black Hills of western South Dakota. It was a small rural farming community with a diverse population and large migrant worker community. Tom’s world changed in a moment when he came from a thriving college town metropolis to the rural town of about three thousand. Thomas immersed himself with learning his new career and exposed his students to many of the new ideas and concepts of instruction he learned in his preparation program.  Additionally, Thomas worked hard to connect with students and families in the community through attending events, volunteering, coaching and sampling the new culture that surrounded him.

Thomas Gaudreau has had continuous professional development in education and human services. His passion for his work and his compassion for others drove him to achieve much success over his career. As, Assistant Superintendent of Schools, he was responsible for the management of a $19.8 million dollar annual budget – he instituted cost controls that resulted in annual savings ranging from $500,000 to $800,000 each year.  Thomas worked with administrators and staff to institute instructional changes that resulted in two schools achieving “Adequate Yearly Progress” thus rescuing these two schools from being declared insufficient under No Child Left Behind regulations.  Additionaly, Thomas worked with teachers and administration to effectively implement a curriculum articulation model within teachers would meet and plan with fellow grade level or content teachers as well as teachers from the next or previous grades.  This model of communication streamlined instruction because students were not sitting through instruction about concepts they had previously learned or content that was better aligned with a different class.

Thomas Gaudreau and his wife are the proud parents of three children. His wife is a music teacher at the local elementary school. It seems the core values of service to others is being passed on to the next generation with this family. Although their 16-year-old is still in high school, he is looking into becoming an attorney specializing in either elder law or sports law.  Their 18-year-old is in college with an end goal of receiving his Doctor of Physical Therapy Degree, and his 23-year-old is has returned to college in preparation to become a firefighter.

How did you get started in your career? What inspired you to become an educator?

Two things inspired me to go into education. First, when I was in 5th grade I had the worst teacher. It was all about him, and not the children. He was eventually accused and found guilty of child abuse. I wanted to do better for kids – I believed that the teacher should be on the job for the students and work hard to insure students had the best possible learning experiences on a daily basis. As a youngster, I was involved in the Scouting Program from Cub Scouts through Boy Scouts and finally finishing as an adult leader. In the Scouting Program, Older kids had the opportunity to train the younger children. I loved the look on their faces when they had that ah-ha moment. That was huge and it still is! That is what hooked me into education.

What made you shift from teaching to administration?

I loved teaching, however, I was expanding my horizons. I was given the opportunity to lead administrative programs on campus. In addition, I excelled in leadership and many of my peers and colleagues express their gratitude or positive feedback when I completed a project because it was well organized, focused on a timely issue and was conducted in a manner that was respectful of their time/professionalism. I then made the decision to go back to school and it was one of the best decisions I made in life. Eventually, I earned my degree in administration in 2003.

Was there ever a time when you doubted your decisions?

Oh yes for sure. During those times, I would step back and reflect on the events. I’d try to determine what I may have done to improve the situation. I would consult with colleagues. After much reflection and some very long walks with my wife and puppy, I would decide on my next plan to move forward. I was never the type of person to act on impulse because that is just poor judgement, a recipe for disaster.

How did you choose the first school you worked with? How was the experience?

1982 was a tough year to find work as a teacher. School districts were financially strapped. The college services office had a weekly vacancy list for hopeful graduates. We would apply for any position where we were even vaguely qualified.

My first position was in a tiny rural town of about 3 thousand people. It was in Western South Dakota, in the Black Hills. I had the experience of living life under a microscope. Teachers were valued and expected to involve themselves in the community.  The principal was very demanding but she consistently was supportive and allowed me to develop my skills as a teacher. In addition, she was also very open to new ideas.

What excites you about the current academic environment?

I am very excited at the recent focus on STEM (Science, Technology, Engineering and Mathematics) in a hands-on, minds-on environment. When I was an Assistant Superintendent of Schools, I initiated a program where we Developed a collaborative outdoor learning campus on a restored 1880s Manor House and farm.  The Indian Hills Manor Outdoor Learning Campus allowed students to:  (1) house project animals for 4-H projects including chickens, pigs, cattle and horses; (2) manage all aspects of grain farming – students had large multi acre plots of corn and soybeans; (3) experiment with plant genetics; (4) landscape classes designed and installed decorative gardens on the Manor property; (5) lower grade students traveled to the Manor for programs including collecting/making maple syrup, picking apples, making apple cider, snowshoeing and cross country skiing.

In early 2018, my Mother became seriously ill and was no longer able to care for herself because of her illness and increasing issues with memory loss.  Mom has always “been there” for myself, my spouse and our children.  The company I was working for did not offer FMLA (Family Medical Leave Act) because they were exempt – less than 50 employees in this region.  I used up what benefit time I had accumulated and resigned to care for my Mom, help her transition to Assisted Living and close her estate.  It was a very difficult decision because I was the Founding Director of the Alternative School I had been associated with and had not planned to leave.  I am very happy that I did make this decision with the support of my spouse and children.  Mom is now stable medically, well cared for, enjoying her golden years and no longer scared of being alone.  Now I am looking at returning to work force.

My compassion for others in their circumstances. I believe very strongly in building relationships. I am open to new ideas. I always try to listen more than I talk.

As the Founding Director of ChanceLight Education Center, we had a teenage student who was expelled from the School District for assaulting an administrator and counselor.  This student served out the time of her expulsion on our campus where her inappropriate behaviors diminished over time.  Transitioning back to their original schools usually took 9 to 18 weeks.  After about 6 weeks, this student was fully transitioned back and continues to be successful.  At her exit conference, she shared that she did not like having to come to an alternative school, realized that she needed to and planned to never misbehave in such a way that she will ever again have to go to alternative school.

I am excited about watching my son play basketball this season. I am also very proud of my children pursuing their college careers. I am also looking forward to starting a new position where I can make a difference in people’s lives.

How would you describe the essence of your career?

I would describe my entire career as a person in service to others.  It is not only in my career that the theme carries over. It is a core belief and that which makes me happy.

As a leader within my community, I have had the opportunity to be of service my students, teachers, colleagues and community on many cooperative endeavors. I have been able to touch the lives of others in a positive and uplifting way.

I am looking forward to sharing my expertise once again, where I can be of service.