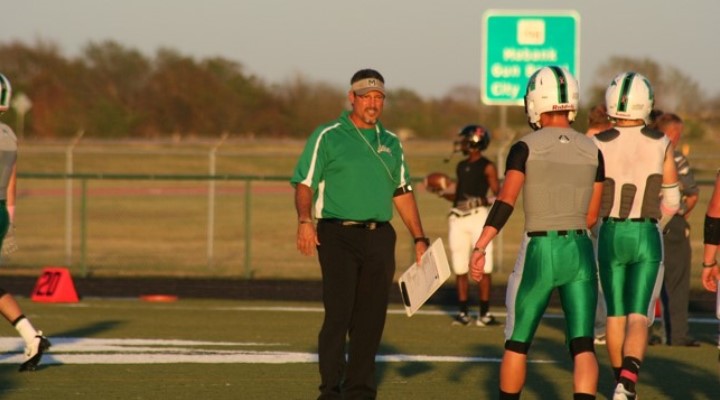 Terry LeBlanc is a football coach with over 35 years of professional coaching experience.

As a passionate ex-college football player, Terry knew early on that he wanted football to be his life. Transitioning into a coaching role in 1983, Terry was able to share his passion for the game with younger players and put his adept football skills to the test. Coach LeBlanc began his coaching career at one of the highest levels of football with Oregon State University, working under the tutelage of the late Joe Avezzano.

This initial high-level coaching experience prepared him for the road ahead and helped him hone his coaching skills. Terry LeBlanc’s career took him all across the state of Texas, coaching first at smaller high schools but quickly moving his way up to larger high schools, after spending some time coaching Division 1 NCAA football. After taking his first high school assistant job, he became a defensive coordinator at one of the second highest classification levels in high schools in the state of Texas.

After six years of coaching experience, Terry scored his first head coaching job. During his time as head coach, Terry both revived programs that were down and started new programs, leading each to post-season play.

How did you get started with coaching Football?

I got my start in coaching after playing high school and college football and finding my love for the game.  Since I could not play anymore, I decided to get a teaching degree, which allowed me to coach the student-athlete and teach high school Math.

What inspired you to start?

Two men in my life inspired me to coach football: my late cousin, EX-NFL player and coach Jack Pardee, and my high school defensive back coach, Roy Kokemoor.  Jack was an inspiration to me because I grew up watching him play.  Roy inspired me because not only was he my mentor, but as a math teacher, he encouraged me to teach math.  Teaching math made it easier to find a job because all coaches have to teach classes except for the Head Football Coach.

How long did it take for you to become Head Coach?

It took me nine years of coaching before I received my first head coaching position.  The first six years were as an assistant football coach, which included three years in the collegiate level and three in the high school level, and the following three years were as defensive coordinator.

I never doubted myself because I had a strong passion for the game, and the knowledge that I was gaining through experience, reinforced my decision to coach.

How did you get your first job as a Coach?

My first coaching job was at Oregon State University.  After I played my last year of college football, I wrote 50 major colleges in an effort to be employed by them.  Oregon State showed some interest in me, so I went up to Oregon and interviewed with Joe Avezzano.  After two days of talking with him, he hired me as a graduate assistant football coach.

What does a typical practice look like for your team?

A typical practice is organized right down to the minute. There are individual activities by position, group activities by units, and team situations.  Each period is carefully timed and consists of high-intensity competitive segments.  Each practice is finished with conditioning by units with specifics to that unit.

The toughest decision I’ve had to make in the last few months was to accept a coaching position that I hadn’t done in years that was further away from my family. However, that turned out to be a great place to be.

I think that what makes me successful is the fact that I am very passionate about my profession and I always leave no stone unturned when it comes to football.  Secondly, I love working with the student athletes and developing the skills they need in order to become great men, students and athletes. I encourage those I coach to pursue a higher education. Finally, I am very receptive to change both in teaching and coaching.

What has been your most satisfying moment while coaching?

I have had the rare opportunity of coaching my son during his sophomore and junior years in high school. This experience allowed me to fulfill a coach’s dream of coaching their own son.

The future holds lots of promise and hopefully more opportunities to be a head football coach again.  I look forward to the next challenge in my career.  I am most excited about living and coaching in the Dallas/Fort Worth area because of all the competitive schools and the number of job opportunities the area has.

Have there been any books that inspired you?

What is a recent purchase you have made that’s helped you with coaching?

My most recent purchase is the book Do your Job: The Leadership Principles that Bill Belichick and the New England Patriots Have Used to Become the Best Dynasty in the NFL by Jackson Carter.