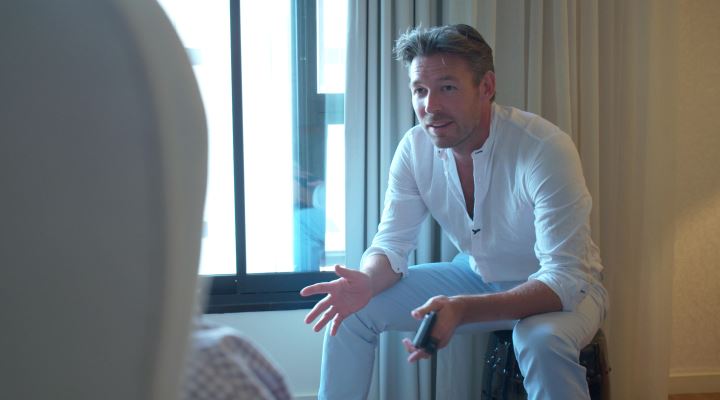 Ryan Wiik, born on September 23rd, 1981, in Norway, as Gunnar Ryan Wiik, is an entrepreneur set on the entertainment industry – specifically on film production and development.

Wiik studied the craft of acting and filmmaking in Australia, then in Spain. He came to the US to establish the connections for his career and continued his studies in LA. As a foreigner in Hollywood, he played a few minor parts, then had the perspective of his lifetime – the filmmaking industry could be changed for the better.

With a business development legacy, coming all the way from his grandfather, he raised several companies to their financial peaks. Setting himself on a new path – sustaining artists and their creations – he is envisioning the future of the movie industry, featuring top class technologies and the use of original works in the field.

Partnering with top-level senior executives and production professionals, from major studios worldwide, Wiik seeks to highly impact the film-making industry. Also, by employing the latest technologies available, he pragmatically navigates the web of movie contracts and contractors, looking forward to implementing innovations, that will completely change the way entertainment works and feels.

I’ve been devoted to cinema and filmed entertainment for as long as I can remember.  After my studies in Australia and LA, I wrote my first screenplay and began acquiring IP, this led to the creation of my first business in the entertainment industry.

I’ve been seeing a void in the entertainment for many years now, and it’s wide open to innovation. I am compelled to bring my latest venture to the world, as I don’t see anyone else addressing the void between commercialism and art.

From diversified investments in entertainment and other asset classes. I am working full time on a project with a start-up entertainment company.

In my previous venture, we took a shareholder investment of 4 million and drove the value into a 100 million dollar company over a seven-year period. Investments in the motion picture industry can take time to turn a profit, particularly as development can go on for years before production starts, one can only expect profits in 12-18 following production start in the theatrical film business.

Somehow, I actually never doubted the vision I had. The biggest challenge to overcome was being able to communicate my vision. I simply needed people to see what I saw. That was all. And that is what eventually happened, with each business development, more and more people became to see what we were building. By the time WR Entertainment went public, it quickly grew to hundreds of shareholders.

While building WR Entertainment, I led the team to launch our publishing division, WR Publishing, which began selling eBooks in the Morgan Kane series. We rebranded the first batch of 15 books with artwork that would stand alongside the planned film franchise. Each book we launched became a number one best-seller on iTunes in Scandinavia, and I remember it was exciting to watch organic sales come in on a daily basis.  At some point, I think our titles held 8 out of 10 spots of the top seller list. Those were the only consumer products we took to market during those days.

I believe in developing and bringing quality products to consumers. Once you are in that position, you have a plethora of tools to make consumers find their way to your product.

Another element is of course to develop a solid reputation for any client or consumer experience.

I found myself with nothing more than a backpack at a literal crossroads near the southern Mexican border. I had to choose whether I was going to head south, into Belize and beyond, to live out a simpler life, in the elements of nature, animals and perhaps someone I would meet there. Or to go back north, and return to the complex life that embodies entertainment and entrepreneurship. I meant devoting my life fully to the apparent opportunities in the cinematic arts, and to make a significant change in a stagnated industry.

I am passionately connected to my work. It becomes a way of life. I am also, very disciplined in achieving the targets and goals I set for myself. Throughout the process, I daydream and keep my imagination stimulated to see only unlimited potential. Nothing in life should have limits, and if you believe you are approaching a perceived limit, let hope take even further. Out of such freedom, a true vision will form in your mind. Then you just go out and do it.

Oh, so many moments come to mind. I often imagined meeting a certain person, be it a disciplined executive, politician, billionaire or talent which I respected, it was always an astonishing feeling to come to an agreement with such individuals, whenever my vision would rub off and become partly theirs in a shared understanding. It is a release of so much pent-up energy and anticipation, that comes together as I entered or exited someone office in Mexico City, in Santa Monica, in New York, in Scandinavia, to mention a few.

A singular moment was embarking on the movie making of films we had set up, and developed for so many years. To finally dive back into the creative world, to deal with textiles, horses, and word on a page, after having led my start-up into a publicly traded company. It had been an extraordinary journey already at that point, and it wasn’t more than about halfway there. I sure learned a lot from this experience.

I have a vision that is still formulating, so it’s early days, but I’m very excited to bring something truly innovative to the entertainment business. I have thoughts on how artists can become aligned in the commercial success of their works, and be protected while allowing uncompromised freedom to create. I want to put the power back into the hand of the artist, and fill a large void in the content space.

I’m currently reading “Power House – The untold story of Hollywood’s Creative Artist Agency”, which is not an entirely an untold and new story vs. other books on Hollywood, it reflects the status quo, a history we are all too familiar with. I see it as another inspiration for change and innovation.

Also, I’m enjoying to learn about “Virtual Reality Filmmaking” by Celine Tricart’s new book, it’s a very insight into the technical advancements that our filmed-medium is progressing.

You frequently talk about art and artists. Is this why you were drawn to the filmmaking industry?

Yes, filmmaking is a vast and important medium! It is, in fact, the “Art” of our time. Regrettably, cinema and filmmaking have come to be too much about money and knowing the right people. As Robert Redford once said, “The movie business is about one thing and one thing only: MONEY.” He’s correct and that explains why we see so many sequels, remakes, and reboots.

It is art, but somehow, in a confined space. It’s Hollywood’s fear of bringing totally new stories to the screen! If a motion picture worked its magic once, it can do the same again. And the sad part is that people seem to forget and discard the old versions merely because the new ones feature better special effects and trendy actors. Film becomes redundant and seems to go on and on as movie after movie repeats itself.

I believe we need good original motion pictures that are compelling in both story and cinematic experience, and for that, we need to support art, because in the end, it shapes our lives and it defines us.