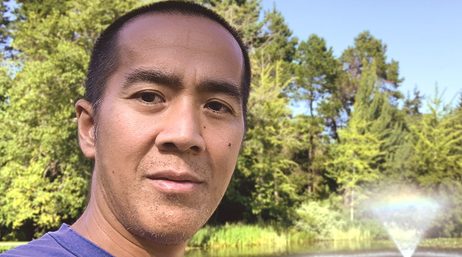 Ricky Martin Chu was raised in a modest neighborhood in Vancouver, BC, Canada.  It was a community where people struggled for their most basic needs. Though his family struggled as well, they owned their own home and car and were considered to be slightly better off than their neighbors. By the time Ricky was thirteen, he had his own paper route.  He was able to buy food and contribute to the family. The paper route taught a lot about having a business where you had to be responsible for collecting your money or not be paid. These were very valuable lessons to learn at such a young age. He learned how to fend for himself.  He learned to work consistently, and simultaneously look for new opportunities.

As he came to be of college-age Ricky struggled with his ability to stay in school and continue to support himself. He began trading in the commodities market full time for about three years. It sustained him but he could not get ahead it became too stressful, too time-consuming, and he really didn’t have the financing to maintain a proper return.  Another example of his self employment is when he started a business purchasing cars from the United States to sell in Canada. Ultimately, he purchased his own place which inspired him to start investing in real estate and enter the property development business.

How did you get started In Property Development?

It started out when I purchased my first personal residence. I renovated it for myself. I had great satisfaction from creating and customizing something of my own. I renovated it and then sold it and made what I considered a good profit. This led to investing in old homes, then smashing them down and building new ones that would result in enough profits to do even bigger projects. That experience is what inspired me to get into this market.

I would assemble a team of investors and property developers, then carefully select the right type of real estate where there was a rezoning opportunity that would increase the allowed residential density, so that I could build more homes than were previously allowed on that same property.

Because I had the experience of starting very small and scaling up slowly, and taking lots of well calculated risks, we all became profitable immediately from the very first project.  As time went on, the projects only became bigger and more profitable.

I never had any doubts. I was very confident. The only thing that could have gone wrong is if the market took a serious dive. I was able to invest with confidence. I moved forward as long as the opportunities kept coming. If I had any doubt that it was going to work, I never would have gone for it.

How did you find your first customer?

Customers in property development are mostly people looking to buy homes. We also do a lot of marketing. The internet is a game-changer in the real estate market.  People can search for listings online and make appointments to see products they are interested in.

We advertise in the media and we also promote events where we can showcase our products. We do this internationally as well.

One of the toughest decisions that I have to make is whether to stick with a project to its completion or to sell it to someone who will take over the work. If I need to raise capital to begin another project I have used this option. I’ve done that in the past. It has worked very well for me most of the time.

I am very motivated and I work hard. I don’t get too comfortable. I stay focused on finding the next business oppportunity or I network with others in the industry. Staying consistent and not being too impulsive is very important as well.

I think the most satisfying thing for any business is seeing whatever product that you have that is in such demand that you can barely keep up with the customers. I would be satisfied to have that product that would go out of control in a positive way.

What does your future hold for your business? What are you most excited about?

I am looking forward to investing in something new. I’d like to learn about other businesses and try something international. I am also excited about seeing our current business evolve and grow.

What books have inspired you that you would recommend to our readers?

I was inspired by a book called Outliers by Malcolm Gladwell. It identifies well-known individuals, who they are and how they became the person they became. It also explains how the individual came to be in their position. It is a very intriguing and motivational book.

A recent purchase that I have made was a storage warehouse. We initially needed a place to store our materials and now we use it as a part time office and meeting place and it turned out to be a lot more convenient than we initially thought.

How do you chose the business you want to pursue?

I choose the business I want to persue by taking into account how much time and work would need to go into an idea before it becomes profitable.  I am less concerned or picky about exactly what it is I am doing as long as these numbers work out.