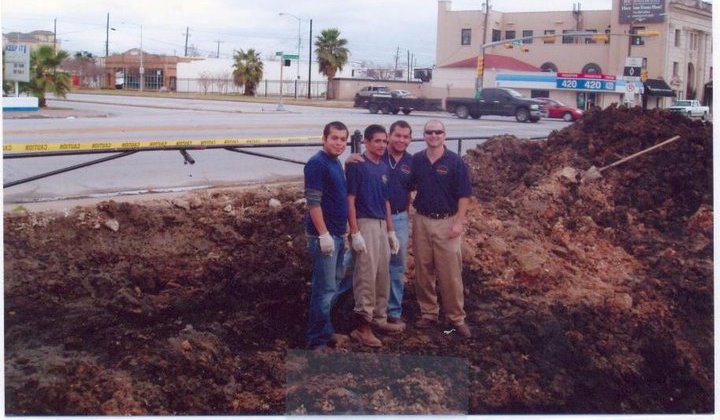 The Personal Philosophy of Richard Saad

If you work hard and smart, you will eventually win. Life is not a sprint, it is a marathon. What I mean by that is you are going to have peaks and valleys, you have to go down through the valleys to hit the peaks. When it comes to being able to support yourself, you go through both of them all the time. If you try and sprint through life, most of the time you will never make it. You will eventually burn and crash out.

I have an unusual background. Prior to doing plumbing, I was a financial/technical guy by trade. A friend of a friend introduced me to an individual who needed some help looking at financials and needed some recommendations. I had some time on my hands so I went over to help him and during this time, I discovered the he was the owner of a company called Nick’s Plumbing, and he wanted to retire. I had started thinking at that time that I wanted to do my own thing. So, I started doing a lot of research in the industry, as well as the economics around the industry and I ended up purchasing the company at the end of 2000.

I was actually more inspired about leaving the corporate world than starting a plumbing company. I was tired of corporate, and I was ready to do my own thing. I didn’t know that “my own thing” was going to be plumbing, but it’s interesting how the universe works. It wasn’t easy, it was extremely difficult and was easily the most challenging endeavor I had ever taken on, but it ended up working out.

Was there ever a time Nick’s struggled to stay alive?

Of course, early on it was extremely difficult. I come from an educated world and I am used to dealing with certain things happening and people taking on certain responsibilities. I greatly miscalculated the trade business where the idea of “personal responsibility” is sometimes a little bit looser. That was the biggest challenge of my career.

The first 3 years were absolutely brutal; and it cost me a whole lot, physically and mentally. For three years it was up and down. Even today, I have a fear of going out of business, and it really doesn’t take very much for that to happen.

I considered those first three years to be an education, and I discovered that if I did not learn plumbing from the ground up I was going to be taken advantage of for the rest of my career, and it probably wasn’t going to work out for the best.

Was there ever a period where you didn’t think it would turn around?

I never thought that way. I just kept working through it. I just kept putting in the hours, and the time, and I never looked back. But looking back today, yes, there are probably a bunch of times where things happened to such a degree that, we shouldn’t even still be here.

What is your earliest memory of a customer encounter?

In my first year in business, myself and a senior technician went to a house together. At the time, I was doing both the dispatching of techs as well as working in the truck. We went to this gentleman’s house, which was in bad shape. The toilet had fallen through the floor. The entire floor was rotten, water was going all through the house, and there was nothing we could do. The entire bathroom would have to be rebuilt just to rectify the toilet problem.

The customer was an older handicapped gentleman, and that just made me feel even worse. My guy grabbed me by the arm and said, “get in the truck”. My reply was “we can’t just leave him with this problem”, and my tech reminded me that I did not have the money to pay for this repair, which is what was going to happen under the circumstances. I kept arguing that we had to do something, but my tech would not hear of it. So, I got in the truck and we left. And for the next month I thought about that guy, and that was hard on me mentally. But, at the end of the day, my tech was right. I didn’t have any money, and was really struggling myself at that point, so I had to walk away from that situation. There was no way I could afford to help that gentleman at the time.

I do try to give back a lot more now. Time, energy, knowledge, as well as a lot of plumbing jobs that help people out. I do believe that this life isn’t all for me. I’ve done several Habitat for Humanities projects, as well as helping with Wounded Warriors a few years ago. I also participate in a federal program where the state pays for people’s homes to be fixed up to be inhabitable, but if the program does not meet the full needs of the recipient, I will kick in the rest to get the home fixed properly.

Referrals, still today eighteen years later, are our #1 way of acquiring new clientele. The #2 method is this thing called the internet. It’s really changed how people make purchasing decisions. People today are as trusting of a “star rating” on the web as they are of a personal referral. I think it has dynamically changed our society, and not always in a positive way. I still think referrals are the best, but people look at the internet and make their buying decisions at that point.

I do think the internet is a great thing and I think it has done a lot of positive things for people, but there are some negatives. One of those negatives is that everyone now has a voice, and how that voice is put to use can actually hurt a company, but it is still our #2 way to acquire and accumulate new customers.

What is the toughest business decision you’ve had to make in the last few months?

Having to get rid of an employee that had been with me for ten years. He was very valuable and very valued, but I think he’d hit a point in his life where he was unhappy with himself and where he was in life, and it began to show in his work. I let it go on for about a year and a half, trying to help him as best I could, trying to get him back on the right path. In the end, I had to give up; which is something I never do, and I had to let him go.

The key to success is the team. Whenever you have a service business it really comes down to the people that are in the office. Aside from the tech that comes to your home, plumbing really is a faceless business. We are on the phone with customers all day, and it is the team that is going to make you or break you. Fortunately, I have had a good team in place for quite some time now.

I think my perseverance plays a factor in that as well. The way I think when I am behind closed doors is all about winning. What drives me is playing that chess game all day and making those moves to win. You can have all the dreams and all the motivation, but if you don’t have people behind you to help you carry those wishes out, you’re not going anywhere.

It’s very satisfying for me to watch the new people we take on grow and develop. If I can help them have a better life, and I can contribute to them being happy, that is what satisfies me.

We definitely have a bright future. We have a really good staff and I am confident in them. That confidence is allowing me to expand my horizons, and I am looking at other types of opportunities. Something like adding different other business units, like HVAC and electrical, these are things I am really looking to dive into during the first quarter of 2018.

The growth of the company for next year is something I am really excited about. We have been growing every year and of course, that really excites me.

Who would you consider to be your business hero?

I really look up to people who work hard and run that marathon. From the guy that is doing the welding, all the way up to the CEO. The people that are really committed and move forward towards whatever that means to them.

I have several company vehicles with over 100,000 miles on them that aren’t performing that well anymore, so I have gotten a few new ones lately. I also have a new company LED sign coming in the next few weeks.

What would you say to someone who wants to start out on their own?

I would say that the future for the service industry is very bright right now. Having an actual trade is making a comeback, and for those that decide to pursue a trade, your future is very bright.

What do you think the legacy of Nick’s Plumbing will be 10 -20 years from now?

My hope is that I have done a great job for those who are helping me. I hope that I have helped them as much as they have helped me, and that is truly what I am concerned about. Making sure that they are achieving what they want to.

10 -20 years down the road, I still see myself here, I don’t know in what capacity but I hope that everyone else enjoys that ride and comes with me.