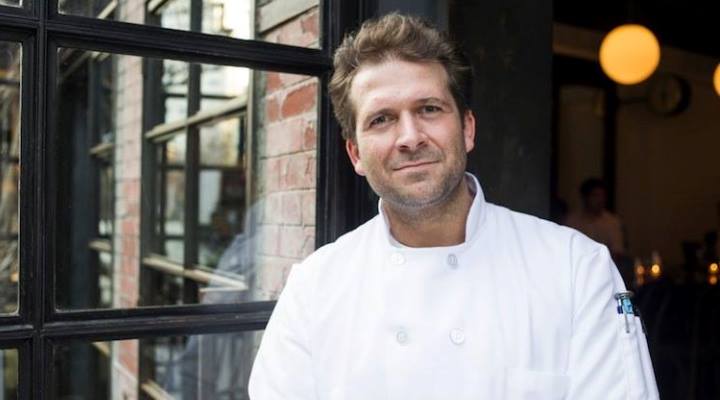 Paul Denamiel is the owner and executive chef of a traditional French restaurant in New York City by the name Le Rivage. Paul was born on the upper east side and spent a great deal of his life inside his family’s restaurants. Not only did he have a love and passion for food but he found he was quite good at it. He remembers being a young boy preparing meals at home for himself and his father would come home from working at his own restaurant purposely not eating dinner just so he can taste what dish Paul had come up with that day.

After high school, he attended The Culinary Institute of America and considers himself very lucky to get his foot in the door at the famous Le Cirque restaurant. While there he was given the greatest opportunity to learn along side French master chefs, Daniel Boulud and Jacques Torres.

Paul is thankful for each opportunity he was given and to this day uses the knowledge he gained from not only his family but the amazing chefs he worked along side while learning. It is that knowledge and his love of food that had him named Burger Bash winner two years in a row and had him compete with none other than Bobby Flay.

My father worked for my uncle who started a restaurant in the late 50’s called Café Du Soir which was the hip restaurant of it’s day. After 30 years my uncle retired, sold the name and my father stayed on to manage it. After a year of retirement my uncle decided he wanted back in and opened up this place in 1982. So when you are in a family business, especially a French family, there is no question that you are going to work in the business. I was just lucky at a young age I was cooking for myself as a necessity, my parents were divorced and my dad was working hard.

When I got older my dad got me a few jobs. He didn’t want me to start at the family business. He wanted me to learn and see how hard things were. He also didn’t want people to think that I received preferential treatment so I worked really hard jobs but learned a lot from them.

For me, the restaurant was preexisting. So, what I would consider profitable where I saw a significant change is how I elevated the restaurant. One way I do that is talking to a lot of people, seeing things through their eyes and learning something from them about what works and what doesn’t.

Everybody has those “what if” questions. Mine was did I make the right decision going into the family business or should I have ventured out on my own. A lot of my mentors thought I should have become a chef. Back then I didn’t realize the difference between being a chef and being a restaurant owner. A chef is an artist and the business part of it, technically, isn’t your main focus.

What I have learned the is that when you are the owner, the chef part becomes part 2 of your priorities.

I feel that in the restaurant business you have to adapt to the times and the technologies and trends. You can copy cat food trends but yours has to be better than the last. In the food industry it’s almost always a reinvention of something else, you can’t trademark a recipe. Believe me, chefs wish they could but you can’t, the best you can do is keep it a secret. So following food trends and making yours the best is a good way to go.

I am also a big believer in social media but you can’t be lazy about it. I think it’s a great tool for advertising. I don’t do it enough, I am really bad at it. I should take my own advice…ha ha ha!

Well, this is more of a personal decision but the hardest one that I have had to make in the last few months was having to put my dog down. Nothing compares to that.

You always have to be prepared, especially when you own a business. Your business may do real well one month so you say to yourself, I am going to go out and celebrate. No, put that money aside because you never know when you will need it. I’m not saying don’t reward yourself but put a majority of that money away. Murphy’s Law, that money is going to be there to help you out.

When a customer tells me they love the food. I am so lucky that I get to experience that every day.

Well, I hired new people to help me with certain aspects like book keeping and such so I consider that a tremendous help!