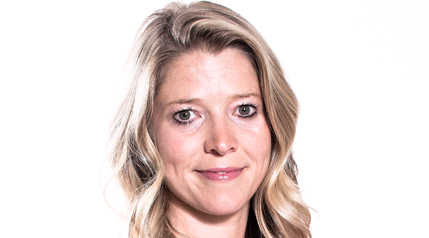 The core of Nicole’s focus is making sure the founder’s vision and the company’s brand are at the forefront and catered to advantageously.

After leaving Morgan Stanley, Nicole went to Nutmeg, a London-based fintech startup focused on online wealth management for millennials. Later during business school, Nicole launched her own startup, which is where she met Lightspeed.

Nicole holds a BSc in math and economics from York University, in England, and an MBA from Stanford. During her time in business school, she launched a start-up of her own, which led her to cross paths with LightSpeed.

I always wanted to get into venture capital from a young age because my father was an entrepreneur. I was helping him build online pharmacies in the 1990s and I learned a lot of lessons, especially around what not to do in entrepreneurship. I actually started my own startup when I was at business school and pitched that to Lightspeed and really was just so deeply impressed with Lightspeed that it made me think, these are people that I want to work with for the rest of my life. That inspired me to then work with them during business school. When the startup didn’t work out, I joined them after business school. That was seven years ago.

Every investor doubts that. I believe you’re only as good as your last investment. Even if you have some investments that are going really well, you’re always going to have some that won’t work out. You’re always going to doubt, but the key is to have terrific partners that you can speak to — and find solutions with — for your portfolio companies. The key is also to continue to learn and improve and get better. I always like to say, every single investment I made is better than the last. I think that lifelong learning and having a growth mindset is the key.

Speaking at conferences and speaking on podcasts and really being a thought leader in terms of sharing our opinions on new sectors with the world.

Things that make me successful are I genuinely love meeting people, and learning all about them in their company. I could do that forever and try to build authentic relationships with people. So, never working with them in a transactional way, but I genuinely care about the person and want to help. The other thing is believing that failure is not an option. Just working really hard and continuing to drive, and focusing on what matters most, and spending my time there and continuing to try and do that. If something is failing, it’s like, OK, well, what can we do to make it successful? Turning them around and having that growth mindset, always listening, always learning, and focusing on the team being greater than the individual.

The great work that Lightspeed has been doing on the diversity and inclusion side of things. I remember the year that we started working with Girls Who Code. The summer that we were working with Girls Who Code and just going in and helping them day after day, and introducing them to portfolio companies, and helping them find jobs in our portfolio companies. And helping them make their ideas into a reality by starting their own startups. That is incredibly satisfying, because you feel like you’re really making a difference in those young women’s lives.

We just had an offsite a couple of weeks ago and really went deep into what the future holds for Lightspeed. I am thrilled about, or most excited about, really continuing to invest in such terrific companies, but with such a strong team. At Lightspeed, we always say we win together, we lose together. The future for Lightspeed is a really strong team. If you’re working with Lightspeed, you’re not just working with me, you’re working with the whole consumer team. As your company grows, you’ll be working with our incredible growth team, like Will Kohler. I’m excited for the future from a team perspective and how different we are from one another. We’re all so complementary, and so you do get such complementary folks around the table helping you in all of the many aspects of your business.

So funny, by the way, my mom’s staying with me right now and she’s trying to get a book and she was like, ‘The only books you have in the house are self-help books.’ I was like, ‘No they’re business books.’ She was like, ‘Yes, exactly. Business books, it’s like self-helping your business. That’s the only thing you guys read about.’ I’m like, oh my God. So I guess The Hard Thing About Hard Things [by Ben Horowitz] and all those sort of books, people’s self-help for business. That’s what we read apparently. Which of those books have inspired me the most? Oh, I really love Shoe Dog. Shoe Dog is the story about Nike by Phil Knight, who also was a Stanford student. I used to study out of the building that he built at Stanford. That story is so inspiring because it shows you that as a founder, it doesn’t get easier. A startup is a layer cake of risks. You just get through one layer and you get to the next layer. Phil Knight found this at Nike. He was like, OK, great. We have this problem, then we just get through to this problem, and even the day they IPOed, they did it because, oh my gosh, they thought they were going to run out of money and there was no other solution. It should be this big celebratory moment, but it really is finding solutions. It’s all about problem-solving and finding solutions. That’s what you’ve really got to love at the end of the day. As a board member, I love helping our founders find solutions. And I love working with founders who want to find solutions to those problems, to their consumers’ problems. So that book was really great.

Take more risks. Maybe think bigger. I grew up in England where people are terrified of failure. Not just scared of it; terrified of failure. In Silicon Valley, it really is this very rare place in the world where failure is not just accepted but embraced. If a founder tells me, ‘I’ve failed at five startups before,’ I’m like, ‘Great. You have learned so many lessons. We want to invest in your next company.’ So you think about all the great founders and how many times they failed before they found the thing that really took off. So the advice I’d give to my younger self growing up in London, which I think the founders are now really starting to do in London, is take more risks and think much bigger, not being afraid to fail.