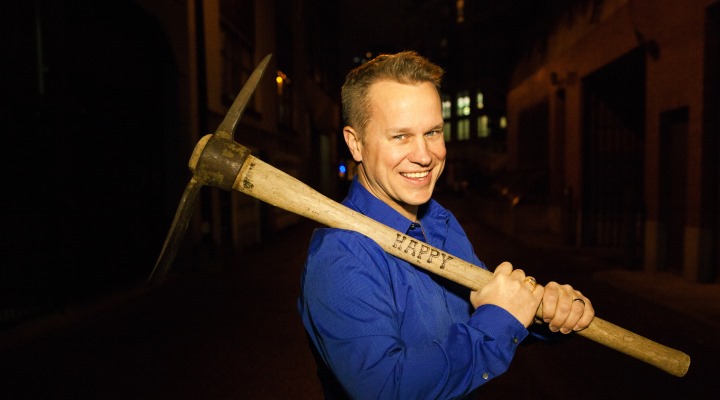 Michael Coleman is an actor, writer, producer, and educator. He is the proud father of two young daughters and an equally proud husband to the love of his life.

Even when he was a child, Michael was an entertainer. From age 8, when his parents would have their friends over, Michael would recruit their children and write/cast/produce a show for the adults to watch later that same night. These performances were often a set of airbands ad comedy sketches that were heavily influenced by Monty Python, Saturday Night Live and the Carol Burnett Show.

By junior high, Michael was heavily involved in the drama program at school. In high school, Michael and his friends created their own cable access sketch comedy show. They rented cameras from 7-11 to shoot their own movies, using their parent’s VCRs for editing.

After graduating high school,  Michael continued his education in university. However, his goals didn’t align with those of the instructors. He ended up dropping out of university and decided to pursue the life he wanted by finding mentors. This approach of learning “from those who do” became the foundation of the post-secondary arts school that Michael owns today, Story Institute.

As an actor, Michael will perform anywhere that will have him. This includes on stage, television, film, video games and cartoons. Some memorable roles and projects include: Happy on ABC’s Once Upon A Time, Bert Camp on Smallville, Stan on Hamtaro, Idasa on Dragonball Z, Dr.Watson on The doctor’s Case, and Inunoshin on Hello Kitty.

Michael Coleman is also a writer and filmmaker with critically acclaimed projects like The Best Day Ever and Thirty-Seven. His company Rebel West Pictures has several projects on the go, one being released this Spring and another going to camera this Summer!

I have always loved to affect people. Specifically, I like to make people smile. I have been attracted to this idea from a very young age. My father had a unique ability that allowed him to always know how to make everyone around him laugh or smile. He wasn’t an entertainer by profession but he is the greatest entertainer I have ever known. He was charismatic, funny, fast with his wit, and fearless in his pursuit of a punchline.

I primarily earn my income as a writer, actor, and an educator. Sometimes I still get money in a birthday card but that probably doesn’t count? I have worked smart and hard to understand my craft and I am grateful for the opportunities it has created. I have been fortunate to work alongside some of my own childhood heroes as a peer and now get to share these same skills with my own students.

I was profitable from high school. I learned the value of working hard early in my professional life and I have always been fearless in pursuing my craft. This doesn’t mean I’ve always succeeded, but I have yet to fail. I believe failing only happens when you quit. If you never quit, it is just a lesson learned. I don’t believe in the traditional definitions of success or failure. I believe only in results. Some you celebrate, others you learn from, but you never let either define you or limit you.

As an actor, I think we all second guess our work. We think “Am I believable right now?”, “What on Earth was I thinking with that choice?” and “I hope nobody notices me doing… whatever… in that scene.”

Like I just mentioned above, I believe the solution to falling down is simply getting up again.

How did you get your first gig?

My first professional gig was playing the lead role of Chase in a feature film that was like the movie “Saved by the Bell” and I was the Zack Morris-type character. I remember walking into the audition to meet the Producer and the Director and knew CONFIDENCE was a huge element of this character. So I went in with handshakes, a big smile, and a “Hi. I’m Chase. I am looking forward to working with you.” I don’t think this over-confidence works often but it sure did that day. I quickly fell out of character and re-introduced myself as Michael and I believe that authenticity mixed with confidence are what sealed the deal.

Results. When people hear or see others getting the results they want, they seek out those same opportunities to achieve their own success. I have always produly defined my success on the success I’ve helped other achieve.

In the last few months, I left a bad business relationship and started from scratch. This was scary because I had to take on new roles and learn everything from the bottom up. It was an enormous mountain to climb and I can think of a million things that would have been easier to do. However, I don’t do what I do because it is easy. I do it because I love it and it makes me happy.

I think it is my authenticity, my commitment to results, and my never-ending desire to always grow as a professional. I think this hunger for self-improvement is infectious and allows me to practice what I preach.

I like to think the entire career is an amalgamation of moments that are satisfying as a whole. I do what I love and I love what I do. How many people can honestly say that? I have been able to work with people I respect at a high level and have them respect my work and work ethic in return.

I am excited to grow Story Institute into an international arts project that assists people from all over the world in achieving their creative career goals. I am also excited about the films and other projects I am developing as an artist myself. I am collaborating with some incredibly talented and smart people who are allowing me to exceed even my own lofty aspirations.

I have so many favorite books. Here are a couple of the most inspiring reads I have encountered:

What is a recent purchase you have made that’s helped with your career?

I just purchased a new sound system for my recording studio. Now, I am able to offer my voice-over services to people from all over the world from the comfort of my own space. I can collaborate on many projects with other creative individuals who need studio work for me on their projects.

What is your greatest concern for the world today?

I should preface this with I am actually quite hopeful and optimistic for the world today. However,  if I were to summarize an immediate area that I believe requires further discussion and change it likely falls under: divisiveness, silence, and hypocrisy.

I fear we are currently becoming too polarized in our ideas and we see differences of opinion as attacks on ourselves. The left is becoming too left, the right too right, and both are shaming the middle into complete silence or risk being excommunicated. I miss intellectually stimulating debate without immediate consequences. I worry about this kangaroo court of social media and the new dangers of the court of public opinion. There is so much rage and fear that we are unfortunately abandoning rational thought and compassion. And we aren’t leaving any room for healing or growth. If we disagree with someone we appear to want them to be isolated or abandoned and in the same breath, we retweet our feelings of being more aware of those feeling abandoned and isolated as needing us more. We used to stand by our friends when they were wronged or stood with them if they did wrong and helped them get better. Now we distance ourselves. We create arguments that don’t allow for healing or reconnection. Differences of opinion have to now be ongoing in perpetuity or hoping the other side is… what? Imprisoned? Killed? Abandoned by society? If we don’t allow “mending fences” to be an option, what kind of a world are we creating? We’re so busy yelling that nobody is listening, that we’ve prohibited ourselves from seeing someone shouting at us saying the same thing. The good news? I think we are inherently good. I think people want to be good. I think we have lots of differences but we also have lots in common. I hope we open ourselves up again soon to be more compassionate, more understanding, and more willing to together. We can argue about changing one another’s hearts and minds but if we perceive differences of opinion as attacks on our person and irreparable offenses, then I am afraid we will continue to perpetuate the toxicity of heated arguments we are seeing more common place today.