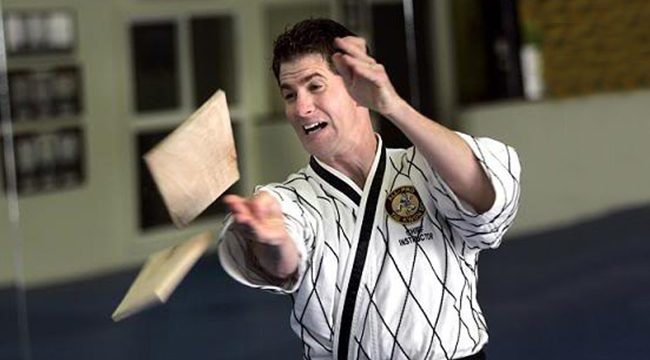 Master Andrew Fanelli is the owner and founder of All-Pro Tae Kwon Do in Los Gatos, California. Having over 40 years of experience in the field of martial arts, there is no doubt that Master Fanelli is an excellent instructor in the craft for anyone seeking to become disciplined in the art.

Born and raised in Los Gatos Ca, Andrew came from a large Italian family. As one of 7 children, he no doubt learned how to fight for many things from a very early age, though it was all in good fun. Master Fanelli’s father was a professional boxer, and it was through him that Andrew first became interested in Martial Arts. For about 5 years, Andrew trained with the manager of a downtown San Jose Garden city boxing club. However, when Andrew’s mom enrolled his little brother in Tae Kwon Do in 1982, Andrew became intrigued. Tae Kwon Do began to interest him much more than boxing. With his father’s blessing, his mother enrolled him in Tae Kwon Do classes in 1982.

As Master Fanelli grew both in age and skill, he was faced with real-world choices that would not always present a simple path. Beginning when he was only 13, Andrew worked with his father whose background was in the environmental industry. Then, Andrew worked his first job, outside of his father’s business. Starting in 1996, he worked in high-tech security and private investigation. However, it quickly became clear that this was not Andrew’s passion.

When Master Fanelli opened his Tae Kwon Do studio in April of 1997, he worked as the sole proprietor, taught all of the classes, and ran the business on his own. The 30-40 hours he spent working at the studio were in addition to the full-time job he still held working high-tech security and private investigation. Master Fanelli continued this for 3 years until he decided to focus his undivided attention on his business and passion: All-Pro Tae Kwon Do in January 2000.

I started out at age 13 training in Boxing.  My father was a professional boxer, so it was only natural!  A couple of years later, my little brother started training with Tae Kwon Do and after watching him in his classes, I was very interested. I begged my mother to let me quit boxing and join Tae Kwon Do. Much to my father’s dismay, but with his blessing though, my mother allowed me to try it and I think it really surprised everyone when I took to it right away. I knew pretty quickly that it was something I wanted to stick with and then later in life, I came back to it when other pursuits couldn’t fulfill me as it does.

I wake up at about 4:30 AM and get to the studio by 5AM. The first thing I do is meditate, which sets the tone for my day. Then it’s on to practicing kicks, forms, etc. The rest of my morning consists of working out in our private gym, administrating to business matters, training for tournaments, teaching classes, and leading seminars. If I have any free time in the evening, I make sure to spend it with my family.

What is the biggest obstacle you had to overcome in order to achieve success?

My biggest obstacle was trying to work 2 full-time jobs and balance my time between that, and teaching Tae Kwon Do.  Eventually, I decided to focus my full attention on the business, and it has been amazing ever since.

My father once told me “If you do what you love, you’ll never work another day in your life”. It took me a while to figure out what I loved and even longer to make it work, but that really has been the best advice because it’s true. I absolutely love what I do and that’s why it doesn’t feel like work at all!

What is your favorite thing about working in your industry?

My favorite part of teaching Tae Kwon Do is seeing my students develop and mature into young adults. One of the biggest things we live by at All-Pro Tae Kwon Do is “Discipline”, we not only teach Martial Arts but also life lessons that our students need to be successful in life.

Who is an inspiration to you?

My biggest inspiration has been my parents who have set great examples and supported me in my youth.

What is your favorite part about being in your industry?

My favorite part of being in this industry was building a successful business from the ground up. I have met so many great people along the way and have been able to give back to my community. I love sharing my knowledge of Martial Arts and serving the Los Gatos community.

What advice would you give to someone who wants to get into your industry?

My best advice for someone looking to get into the Martial Arts industry is this: Make sure it’s what you want before investing in a school or teacher that may not be committed to their students. Do some research on the person, read up on them and see if they have a good reputation within the community. It is very important that you find an instructor that will meet your needs as a student and remain committed for the long run. You can then play a big part in helping grow that person’s business which only increases the martial arts industry as a whole!

If you could go back, what would you do differently?

If I could go back I would have opened my studio sooner.

What is the biggest misconception about your industry?

The biggest misconception about my industry is that Tae Kwon Do is just for children and not adults as well. I hope to change that by offering adult classes as well as family martial arts classes.

“Train with honor, be friendly but train hard. Don’t complain and never give up. Believe in yourself and your art and respect others do the same for theirs.” – Grand Master Kuk Sun Son of Choi Hong Hi