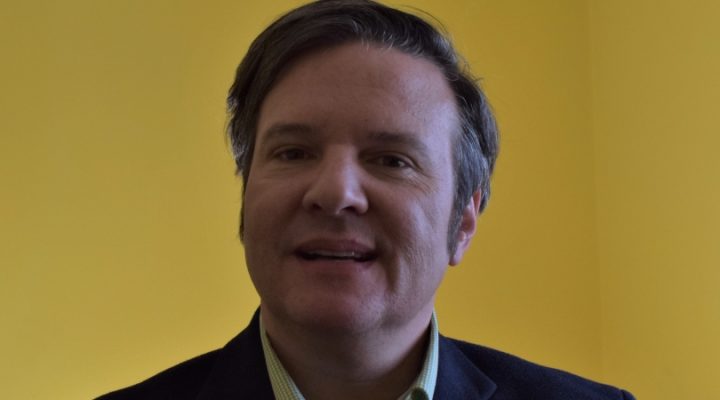 Marc Minsker is an educator who actively serves the local community through volunteer work and cultural programming. Born in Charleston, West Virginia, he moved with his family to Philadelphia in 1984, where he attended middle and high school. It was during these years, as a student at Lasalle College High School, that he was immersed in community service activities and outreach – experiences that would have a lasting impression.

Attending the University of South Carolina (USC) in Columbia, Marc Minsker studied literature and become actively involved in radio at the college radio station, WUSC-FM. His interest in exploring music genres, like jazz, blues, avant-garde, and world music, contributed to his own development as a musician, performing with a variety of bands and ensembles throughout the Carolinas, including guitarist Eugene Chadbourne.

After receiving his B.A. in English from USC, he attended graduate school at Appalachian State University, where he completed an M.A. in English, and worked at the college radio station WASU-FM, serving as program director. After graduate school, Minsker returned to USC, taking a job in the Department of English as Assistant Director of Graduate Studies. While at USC in 1997, he founded a new organization at USC known as the Creative Music & Film Society (CMFS), and over the next three years, the organization’s membership grew to over 250 students and faculty members.

As the director of CMFS, he organized over 30 concerts by international musicians and jazz artists, produced three film festivals, and presented two literary festivals at USC. His involvement in local arts and cultural programming in South Carolina led to him serving on the board of directors for two non-profit organizations, Nickelodeon Theatre and Gallery 701. Through these avenues and through CMFS, he grew adept at grant writing, securing several large grants for arts programming from the Lila Wallace Reader’s Digest Fund, the South Carolina Arts Commission, and the National Endowment for the Humanities, totaling over $50k for a variety of projects and events.

Moving to Washington, DC in the fall of 2000, Minsker began teaching English at Yeshiva of Greater Washington, an Orthodox Jewish high school in Silver Spring. During his tenure at Yeshiva, he helped develop relationships and programs with several important organizations including Shepard’s Table (at Progress Place) and Arts for Art, a New York-based non-profit dedicated to promotive creative arts in lower-income neighborhoods. In 2004, he married Jia Gilani and accepted a teaching position at St. John’s at Prospect Hall in Frederick (later renamed Catholic Prep).

During his 15 years at St. John’s, in his roles as a teacher, assistant principal, and principal, Minsker spearheaded dozens of service collaborations for students and teachers at the Maryland Food Bank, Frederick Rescue Mission, The Way Station of Frederick County, The San Mar Children’s Home, Faith House, and many local nursing homes. With an emphasis on providing experiential learning opportunities for his students, Minsker found numerous ways to integrate a rigorous curriculum with meaningful experiences outside of the classroom.

Understanding the need for providing students with an active path to citizenship and a deeper understanding of social justice issues, he used his role as a high school administrator to build lasting bridges between St. John’s and local community organizations. Along the way, he also served on the board of Seed of Life CSA from 2016 to 2018, helping the fledgling non-profit improve its services and outreach for the food insecure of Frederick County. He organized and produced two successful 5k Charity Runs, raising over $7000 for cancer research through the Hurwitz Breast Cancer Fund in Frederick.

In 2018, he accepted a teaching position at Wilson High School in Washington, DC, where he works with an extremely diverse student body of over 2000 students. Located in northwest DC, Wilson is DC’s largest high school. Connecting students to meaningful service opportunities, Minsker implemented a new service-learning program at Wilson in January of 2019 known as TigerServe. The first of its kind, TigerServe is an innovative e-learning platform that connects students to meaningful service opportunities and provides local community organizations with valuable feedback through student reflections and dialogue. He currently lives in Bethesda with his wife and two sons, serving as President of the Parkview Neighborhood Association for the past three years.

In his spare time, he works as a DJ and fundraiser at Takoma Park’s community radio (94.3 FM WOWD). He also produces concerts and arts events locally with several organizations including Arts for Art, Institute of Musical Traditions, and We Are Takoma. In 2019, he has several planned collaborations with DC Public Libraries special collections focusing on preserving oral histories from underrepresented communities and musicians, artists, and poets outside of the mainstream. Currently, he is completing his M.S. in Educational Studies through the School of Education at Johns Hopkins University.

I started TigerServe at Wilson High School in February of 2019 to help fulfill the school’s mission of providing opportunities for students “on the path to active citizenship” and to contribute to meaningful service work in our community.   In my first year of teaching at Wilson, it became apparent that students needed additional support to achieve the diploma requirement of 100 hours of community service.  On a deeper level, beyond simply fulfilling a requirement, high school students can benefit greatly from a blended learning platform focused on service and volunteer work.

What inspired you to start TigerServe?

From experiences in my personal and professional life, I cannot stress enough how valuable service learning is for teenagers and adults.   It helps to shape character.  Working in a high school of 2000 students, I was inspired to create an online portal for students and faculty to both document and to reflect on the community service being completed in Washington, DC.   Furthermore, it became apparent that many of the seniors that I teach not only lack service hours but also lack access to opportunities with non-profit organizations in our city.  In a world where social media and technology contribute to self-absorption, it is critical that individuals are exposed to complex societal issues by working with others in the greater community and serving those in need.   TigerServe hopes to provide this.

How do you define success?

TigerServe’s success is gauged by participation, not profit.   This means not only the number of students participating in this eLearning platform but also the depth of their reflections and their responses.   Ultimately, the long-term success of TigerServe will be determined through a rich and detailed archive of experiences that are shared between students, faculty, and parents.

How long did it take for you to succeed?

As a fledgling project, TigerServe is building in popularity and participation.  Since its inception last month, over 60 students and four teachers have enrolled online.   A personal goal that I have set is for all 210 seniors currently lacking hours to be enrolled and participating in TigerServe by the upcoming spring break (April 15).  Hitting that target will demonstrate one measure of success.

After our TigerServe logo and branding were designed by a gifted student, we rolled it out in an assembly with all 450 seniors at Wilson.  During the presentation and explanation, I asked seniors needing service hours to pull out their phones and enroll.    By the end of the assembly, only 20 students had done so; I was somewhat discouraged and doubtful about enrollment numbers.   But after sharing the information with senior parents at a second school meeting, enrollment tripled.   Lesson learned:  even 17 and 18 year-olds sometimes need mom or dad to guide them.

How did you get your first participant?

Before presenting this eLearning platform in an assembly with the entire senior class, I had an eager student from one of my English classes ask me to help her attain service hours.  She not only was the first one to sign up for the portal, but she also designed the logo in Photoshop and assisted with our branding.

What is one marketing strategy (other than referrals) that you’re using that works really well to generate interest?

Communicating the goal of TigerServe through school newsletters and electronic mailings has been effective in generating more interest and having more students sign up on the portal.   Word of mouth among students has also helped to direct more seniors to TigerServe.  The school newspaper, THE BEACON, is publishing an upcoming article on the portal, which I anticipate will recruit more students.

While I wouldn’t classify it necessarily as tough, I have had to remove two immature seniors who somehow felt it was OK to post inappropriate responses in the forum. Both of these male students need service hours but won’t be able to use TigerServe services to assist in this.  As the moderator of TigerServe, I have to ensure that all users are appropriate in their postings.  Eventually, I would like to have selected, mature students manage the portal.

I have a passion for working with young adults in non-traditional classroom settings and immersing them in experiential learning. I don’t have all the answers and what each new learning experience to teach me something also.   Often, it is witnessing teenagers working together for a common goal and getting their hands dirty.

What has been your most satisfying moment in education?

Working with students outside of the school building is incredibly rewarding, whether it be at the homeless shelter, at the food bank, or on National Park property removing invasive species. There is nothing more satisfying than faculty-student collaborations where grades aren’t a factor and where student input is more valuable that anything a teacher can plan for or present.

What does the future hold for TigerServe?

TigerServe has the potential to become a game-changing e-platform for all 2000 students at Wilson High School. It is my hope that the positive experiences of seniors this year will help yield more participation by underclassmen in the following years.

The idea that this portal will become a lasting archive of volunteer work and service learning in the future is very exciting to me. Reflecting the diversity of our student population in terms of geographic areas of the city and also the variety of community service experiences, I am hopeful that TigerServe will become a valuable repository of Wilson student service projects.

What is the biggest challenge in encouraging students to become involved in the community?

Helping them see and understand that each of them can make a difference.   The little things we do – whether it be cleaning up trash along the park, collecting personal hygiene products in a drive for patrons at the homeless shelter, or providing after-school tutoring to struggling students at the middle school next door – can make more of a difference in the lives of others than we will ever know.