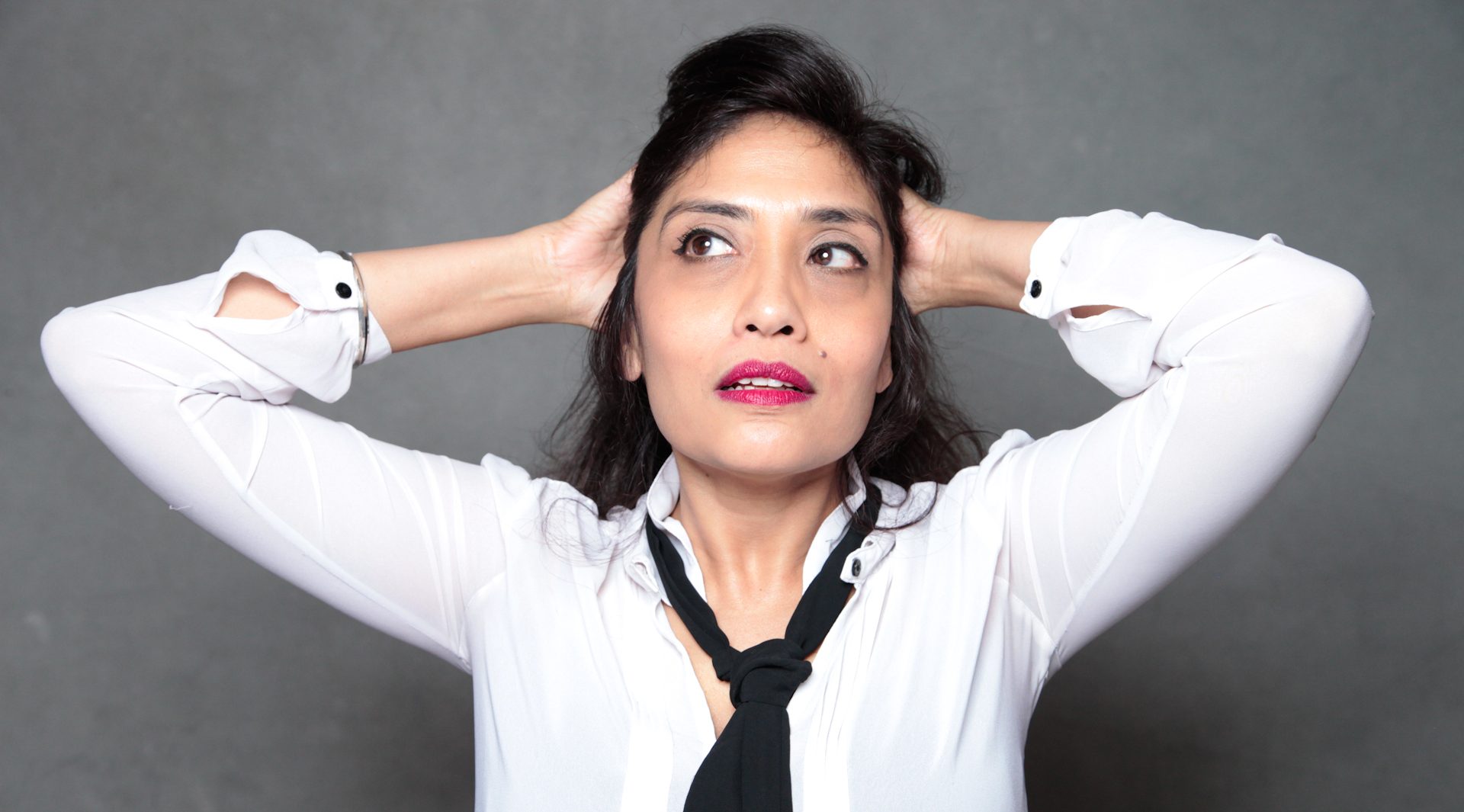 Maninder Chawla, also known as Nikki Chawla, is an American actor, professor, model, and standup comic. She was nominated best supporting actress for the award-winning short film, Fresh Blood. She also received the Laurel Wreath Award at the 2019 Sikh International Film Festival for her short film, Baby. She graduated from the Actors Studio Drama school based at Pace University with a Master of Fine Arts in Acting, has a master’s degree in education and a bachelor’s degree in communications, arts and media.

Nikki is gregarious, with a personality perfectly suited for her life choices. As a former teacher, she is well versed in instructing others while maintaining her vivacious and contagiously positive personality. Nikki has had a passion for performing since she was just a little girl. She would often entertain her family members by doing impressions and crazy stunts just to get a reaction. Nikki has always had the ability to make herself laugh and find humor without reservation. This love for performing blossoms and even when Nikki grows up to become a kindergarten teacher, she does not give up on her dreams.

While Nikki was teaching kindergarten, she started to pursue standup comedy. Then she decided to take the leap and quit her teaching job to enroll in acting classes full time to pursue her true passion. That leap of faith has paid off well for Nikki, she is a thriving and versatile actress. She has performed in plays such as Tragedy of Richard the Third at Startford Upon Avon, England for The Oxford Shakespeare Company, as the role of Hastings, Janki in The Color of Vengeance at The New Perspectives Theatre Company, Zarina in Where Children Play (Berkshire Fringe Festival), Lady Capulet in Romeo & Juliet, and Shoba in A View from Versova. Nikki is in a short film called Fresh Blood, playing Taaza Khoon, on Amazon Prime. Nikki also appears in Alone Together, which focuses on the emotional impact of the Covid-19 pandemic on people belonging to different walks of life. Participants self-taped their routines and shared experiences during the shelter-in-place in several cities in the U.S.

Nikki also recently finished shooting her role as Nisha in a series called Hiraeth. Hiraeth airs exclusively on Amazon. The six-part mini-series follows the stories of a diverse group of individuals who are figuring out where they fit in. Their stories include critical discussions of issues including immigration, discrimination, and racism, while the viewers are taken on an engrossing journey ranging from the mundane to supernatural.

Nikki has spent so much time developing such impressive acting skills that she now shares them with others thru her acting lessons. As a member of the National Alliance of Acting Teachers, she helps others take a mind-body approach to break thru any physical or emotional barriers that may be holding them back from accessing their own potential.

Nikki has accomplished a great deal. She was a Graduate of the Actors Studio Drama school at Pace University with an MFA. Along with obtaining her master’s in education, Nikki received a bachelor’s in Communications, Arts & Media. She is also a member of Sag Aftra and Actors’ Equity.

Another endeavor that Nikki has spent much time and effort on is life coaching. She has studied with the legendary Sir Les Brown. Not only is she a prodigy of his, but Nikki is also a member of the world coach institute, or WCI, meaning she is a certified professional life coach. Under her mentor, Les Brown, Nikki has gained the ability to inspire and motivate people from all walks of life. Skillfully weaving life-changing and compelling, influential, motivational stories that leave a lasting impact on others. So, when you leave a session with her, you leave as another person. Nikki Chawla is a person that lights up a room. She has many talents and what is even more striking about her is she is passionate about sharing those talents with others. Whether she is making an audience laugh during stand up, making them cry during a compelling and moving on-screen performance, teaching acting to others, or motivating them to be their best selves. Nikki will never stop elevating herself to the next level and others along the way.

I decided to make the leap while I was still teaching. I had done some stand up, but I took the leap and quit my job to enroll in acting classes full time. I had some amazing teachers like Gene Lasko and Elizabeth Kemp who helped me find my true self. With each role I took on, my confidence grew, and I was ready to keep growing. Then I also became a Professor of acting so that I could teach the art to others. My journey has also led me into learning from Les Brown and becoming a life coach which, I am also very passionate about. Acting is about expressing truth and life coaching is also about helping others to find their truth and to learn how to express it so these passions of mine really go hand in hand very well.

Thankfully it didn’t take me too long to start making money in the industry. I remember the moment that I was down to my last paycheck from teaching, while I was still enrolled in acting classes. It took a lot of faith in my own abilities to know that I would be able to support myself, but I kept going. Thankfully it paid off. I think it was very crucial that I didn’t start doubting myself at that moment or it could have been catastrophic for me.

When I first was admitted to the Actors Studio Drama School, I auditioned for Maggie from Cat on a Hot Tin Roof by Tennessee Williams. My teacher was Elizabeth kemp, who is well known for teaching A-list celebrities. I remember sitting there, it was the first week of the basic technique class of acting with Elizabeth Kemp and I am looking at these others in the class that are younger than I am, thinking about how much more life experience I have. Here I was, starting over after having spent years of my life in a teaching career and the feelings of doubt were creeping in. I just kept thinking “I can’t do this”, I had left a paid job to do this! I shared my feelings with Elizabeth, and she said, “you want to go back to teaching, go right ahead, there’s the door”. That was exactly the wakeup call I needed to snap me out of those doubts and I NEVER looked back after that.

After I became a Professor of Acting, I obtained clients pretty quickly thru referrals and word of mouth. Similarly, with my life coaching, word had spread pretty quickly. Now, I am doing more active advertising as well.

Speaking of active advertising, really getting your name out there is so important. There are various ways you can achieve this. Having a great website is crucial. Also making sure to have a strong online presence along with engaging with your followers.

I don’t know if it is necessarily a tough decision, but these past few months have been filled with so much growth for me that it has been a lot to navigate. While growth can be exciting, it can be overwhelming too so it is very important to learn how to take in all of the positivity that comes along with the growth and sit with it. Mindfulness is so undervalued in our society, but it is so powerful. Living in the present will help us to solve so many of the stresses we face on a daily basis. My journey with life coaching has been insightful, illuminating, and above all transformational. It has given me awareness and a newfound love for silence and serenity. I discovered through my journey that I am an empath. So much so that I have had to slow down and practice my mindfulness so that I can map out my ideal course moving forward.

Ever since I was a little girl, the one that would have to have teacher’s conferences for being “too happy”, I have had a drive and passion that can be hard to contain at times. When I feel strongly about something, I see it through. I also have always been someone that feels things very deeply and I think that quality definitely helps me both in my acting and in my life coaching.

There have been a several proud moments for me. I used to envision myself in the audience of Inside the Actors Studio with James Lipton, asking questions. That day when I was actually on the other side of that was absolutely a satisfying moment. James Lipton was actually there on the day of our class graduation. When I graduated, it was a satisfying moment of personal achievement. When I was a Stand-Up Comic, I had many proud moments sharing the stage with many famous comics. Also, every role I get I consider a personal accomplishment so there have been countless satisfying moments for me. When I look back on my life, it has been such a satisfying journey and yet I’m just getting started!

I am indescribably excited for the changes that are sure to come in the near future. Along with my current series on Amazon, I have some other exciting things I the pipeline. I am also very excited about my life coaching business that is taking off.

You Gotta be hungry, the pathway to your greatness dream and destiny by Les Brown. A play called Day of Wine and Roses by JP Miller, and some of my favorite poets are Rumi, Gibran Khali. I love Eugene O’Neill, Tennessee William’s, and my favorite director is Sidney Lumet.

Remember that doing service starts at home, doing it with positive vibrations. If you are not doing service at home that you are not of service to anyone. Also, to keep going and don’t let anyone stop you no matter what the odds are.