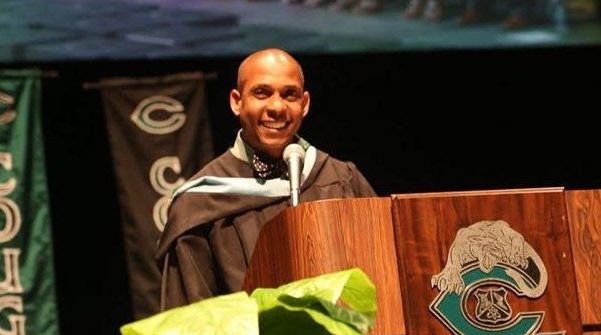 Kermit Ward was born on January 12th in Waco, Texas. Although his father was just a phone call away, he never met his father in person until he was at the age of 13; yet now he considers his father his best friend. He was raised in a large project housing complex yet his single parent mom cleverly circumvented the attendance boundaries of the local education system and Kermit was enrolled in highly middle class elementary school. Kermit’s childhood interests were immediate and still exist today as he loved to go fishing and play and watch sports. Although he loved sports at the time he was not exceptionally great at anything yet progressively got better each year.

Certainly, God-given Kermit became, seemingly overnight, one of the better athletes in his school as a sophomore and kept getting better each year until he became a prized dual sport recruit in track and football. Due to the limited resources of his mom, Kermit well knew this was the only opportunity available for higher-ed attainment. He ultimately chose Baylor University over LSU and experienced a setback due to a mistake of his counselor that forced him to enroll in a Junior College. Kermit did fight his way back to Baylor University and graduated with a degree in Accounting in 1992. He competed in both track and field and football and was named an All-American in both his junior and senior years.

He soon learned that Accounting was not his first love and he curiously tried substitute teaching and loved it. He worked over the summer to attain full certification and taught Math for 5 years before moving into administration. After completing his Master’s Degree he knew that there was yet one more degree to attain. He applied for the University of Texas at Austin’s prestigious Cooperative Superintendency Program (CSP) and was initially denied yet was conditionally admitted after arranging a meeting with the Dean of the School of Education. Kermit has completed all his course work in the program and finished with a 3.95 GPA. He has completed 3 of 5 chapters of his dissertation (Does Title 1 Money significantly impact low performing schools) and will graduate in August 2020.

Kermit is currently serving as the superintendent of Clarksville ISD for the 2nd year.

How did you get started in with your business?

I got started in the teaching profession after graduating with a degree in Accounting from Baylor University and working in the auditing area of accounting and just knowing that there was something different out there waiting for me. My work as an accountant was uneventful and very redundant.  I was coerced by my Godmother to try out teaching and opted to be a substitute teacher during an extended vacation period from my auditing job. After the first day I was in love with the profession. I was further motivated to teach as it would provide me a better opportunity to oversee the educational opportunities of my younger brother and sister.

I currently work as a superintendent of Clarksville ISD and have accumulated, over time, several rental properties in the Waco, Texas area. I am also a former Park Ranger for the City of Waco.

How long did it take for you to become profitable When you were starting out, was there ever a time you doubted it would work? If so, how did you handle that?

With regards to the rental properties, there were several periods of low moments and setbacks however my faith was steadfast and deep. I just knew I could make this work.  After embracing, and more importantly, learning from the mistakes that I made the rental income business is now generating a monthly profit. I see the work as a superintendent the same way—being surrounded by a team of people so very comfortable with each other that making mistakes and learning from them is simply part of how we grow and do our job. I want people in my organization to see no shame in failure. The shame is in the acceptance of failure.

I got my first customer as a walk-up. She approached me and I was able to provide her with the necessary housing. I am proud to say that 15 years later she still in a renter for me.

Word of mouth is also helps spread the word of my properties. Perhaps the grandest marketing strategy is maintaining a product that is appealing to others and having a reputation for treating people fairly. This really is my approach in everything that I do.

The toughest decision I have made in the past few months was opting for my district to call for an election to increase the tax rate despite the apprehension that I received from some of the board members who were opposed. I tabled the idea and simply brought more data and rationale to them at another board meeting until we all were unified at 7 to 0 that we could win but more importantly, this was the right thing to do for the district and its children. Despite the influence of their apprehension, we moved forward in my district. The result was a passing rate of 85% in a place that had failed the two prior elections miserably. In the end that did more to cement the strong relationship that still exists today with our Team of 8 board.

I should be considered a successful leader due to my awareness of my own weaknesses and my ability to seek help in areas of my known weaknesses. I also have the ability to identify and retain talented individuals and allow them to be creative in the areas that they specialize in. Last, I am familiar with all the hardships associated with achieving goals at a high level despite numerous setbacks. The word for that is grit.

The day that I was accepted into the University of Texas’ prestigious doctoral program. It was not the acceptance that led to my euphoric moment; it was the fight associated with being told no initially and showing some grit and tracking down the Dean of Education and having a meeting with him to discuss the adversity and the things that I had to overcome to graduate from Baylor University with a degree in Accounting. I needed him to consider the fact that I was a dual sport athlete meaning that there really was no off time for me, majoring in a very rigorous area in an era where there was no such thing as online learning and studying.

The future should entail moving on to a much larger school district thus making an even greater impact in the world through the lens of education. I want to be known as a prime difference-maker.

I would consider all the books by Malcolm Gladwell great examples of books about leadership and why the world is constructed in the way that it is. I have read all of his books.

Don’t stop the grind because the kids would not want it any other way.

Choose to get it right than try to be right.