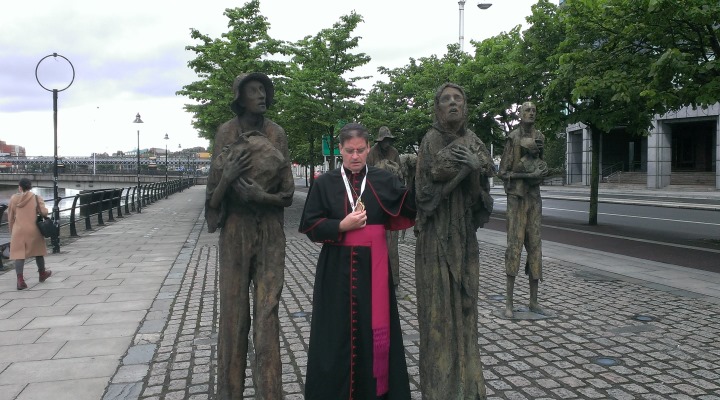 The Reverend Monsignor Kenneth Steffen, is a priest at St. Peter and Paul Church in St. Alton, Illinois. He was fifth of 15 children who were born to his parents in Effington, Illinois and has lived in the state his entire life. Monsignor Steffen attended the Diocesan Seminary of the Immaculate Conception and Springfield College, where he received his associate degree. From there, he went to Cardinal Glennon College in St Louis, where he received his bachelor’s in philosophy and then stayed in St. Louis to obtain a Masters of Divinity and Theology degree from Kenrick Seminary. Kenneth Steffen moved to Washington, D.C. and received his Doctorate of ministry in law from the Catholic University of America. He became an ordained priest in 1984.

Monsignor Kenneth Steffen became the priest for St. Peter and Paul Church in 2013 after being requested by the region’s bishop. Initially, he was to fill a position for an old monsignor to replace their current priest, who was at the time unable to fulfill his holy duties. While Monsignor Kenneth Steffen was at the pulpit, he was also Chaplain for St. Anthony of Padua and St. Claire’s Hospitals, which he held until 2014.

Aside from his spiritual duties, Monsignor Kenneth Steffen is the Chaplain of the Filipino, and Hispanic Catholic Communities and the 4th Degree of Knights of Columbus, as well as Pastoral Director for Hospice at St. Anthony of Padua and St. Clare Hospitals and serves on several boards with both locations. Monsignor Steffen serves as an adjutant judicial vicar, defender of the bond in the Matrimonial Tribune, and judge for the Diocese of Springfield-in-Illinois since he became a priest in 1983. He also serves on several boards and committees throughout the community and is Confessor and Spiritual Director at the Franciscan Sisters of the Martyr Saint George and Ursuline Sisters, which are located in Alton, Illinois.

What inspired you to begin teaching religion?

As a priest, I always think there are two ways that God calls everybody. St. Paul recalled that his given name was Saul during the period when he was persecuting Christians. While he was on his way to Damascus, he was knocked off his high horse as we would say and became blind. During this period of illness and blindness, he came to his senses and realized that God was calling him to a new location. So, this would be one example.

Another would involve saying, for example, someone living a particular lifestyle and then something happens to them, whether it was an event or a realization that ultimately changed their lives, like St. John the Beloved Disciple. As you know, he was one of the resellers for Christ, and he was excruciating when Christ was with him. Whenever some significant event happened in the life of Christ, it always involved Peter, James, and John. John was the only apostle who stood at the foot of the cross, while the others had abandoned Christ. My experience was similar to that of John, my mind has always been set since I was a child that for some reason, I was going to speak the word of God. I never thought about being anything else, and knew from that point it would be my calling in life.

What also helped is that I came from a very devout, religious family and lived in a community that not only embraced every aspect of their faith but supported me on my journey to teach the word of God to all those who will listen. For me, following the path I took has always been there and I became hungry to learn all I could, so I could devote my life to Christ. I’m grateful for the guidance I have received throughout my life, to help me become the person that I am today.

When you were starting out, was there ever a time you doubted it was the right choice for you? If so, how did you handle that?

That is a good question. Now one of the things that happen when you go to Seminary is that they assign to you a spiritual director because you’re there for eight years. They are there to help guide you spiritually. However, there are two questions you must ask yourself when going to the Seminary, and that is, was God calling for me to be a priest or was this just in my mind?

The second one could be anything to do with religion and take that path, so asking freely is always good to put your mind at ease and can help you make sure that your decision was the right one. Because your verdict must be a free choice because whether it is marriage or joining the priesthood, it’s a concentrated life if the person was forced into their decision.

Those were the questions that I struggled with before I became a priest, and I came to my spiritual director with my concerns. How I overcame the doubt, was when my spiritual director replied to my question with are you happy with what you’re doing already? I responded to him with a yes, and that is how I knew it was God’s calling and that I freely returned to Seminary to do what felt right to me.

What does a typical day look like for you?

Well, I begin my day early, roughly at around 5:00 in the morning and I do what is called the divine offices or the liturgy of the hours, which is an hour-long prayer, to mark each hour to sanctify the day. The divine offices are some of the oldest prayers in the world, and it followed the original Jewish recital of morning prayers and was practiced by the earliest followers of Christianity. After I am done with my divine offices, I practice a private meditation, before starting the rest of my day. I have breakfast, and then begin my first mass of the day.

On the days where I work the Chancery, I would head there and spend my day working on tribunal issues. Other days, I would work at the parish, go through my mail, and possibly teach at the school. Then there is kissing the sick, or perform funerals. Later in the evenings, I work out by running, so I am healthy to teach the word of god to my parishioners or have meetings with the parish or financial council and other nights I may hold marriage preparation counseling. Once I complete these for the night, I will prepare things for the following day and by 10:00, I perform prayers and then retire for the night.

What has been the most satisfying moment in your spiritual career?

The most satisfying for me is when I am preaching, especially when you realize that you’re helping others understand that what you’re doing is a crucial time to celebrate the sacraments, especially the joyful times. You see them embracing their faith, and these families are bringing their children to get baptized, and it isn’t just a cultural thing. It’s much more meaningful than that because they want to live out their faith, so for me, it is a beautiful thing to encounter.

What do you enjoy doing when you are not teaching?

There are a lot of things that I enjoy doing in my spare time. I like working out, going to the movies, spending time at the park, and going out to dinner with friends. Those are just some of the things I love doing when I have free-time. I also enjoy leading pilgrimages, that are similar to shrines around the world. My life is serving God and our communities to help them become better each day.

What does the future hold for you?

What I like to focus on, is eternal life, so for me rolling with every experience is a great way to learn and in return, grow closer to Christ. I also see helping a lot of those in need throughout the community and guiding them towards a great relationship with God. The future for me is to work towards eternal life and serve Christ in the best ways I can.

Several books have inspired me throughout my time as a priest. I enjoy books that are related to the scriptures and the laws of scriptures. I also like to read books on all of the saints, so I can learn about them and how I can use their lives to inspire me to become better connected with Christ. I also like to read about parish life and the priesthood in general.

What is one piece of advice you would give to your younger self or young people today?

The one thing I would tell my younger Monsignor Kenneth Steffen or younger people is always to remain close to Christ and that every night as a discern ask themselves what do they want to do with themselves in life. Also, they should ask God what he would like for them to become because we are all connected with God and when the day is over with he’s the one we should ask how we need to direct our lives. He knows the best way to guide us to do right by not only ourselves but by others. Maybe he will tell you that becoming a doctor, firefighter, or teacher is the right path. Perhaps he may say to follow his teachings to become a priest or a nun. But always ask him what way is right for you and to also keep a living relationship with God. It takes time and effort to create a lasting relationship with him, and it begins in childhood.

If someone were considering following a similar path, how would you suggest they get started?

If someone wants to take the path of priesthood, I would tell them to pray to God and get confirmation, not only from him but others that the ministry is the right path for them. Perhaps he will say that taking another route is the way to go. But if he says that the road to the priesthood is in their future, then they should study as much as they can about the faith, and there will be times where it will be tested to see if their faith is as strong as they think. Building a healthy relationship with Christ and a foundation of their religion is essential when entering into something as life-changing as becoming a priest.