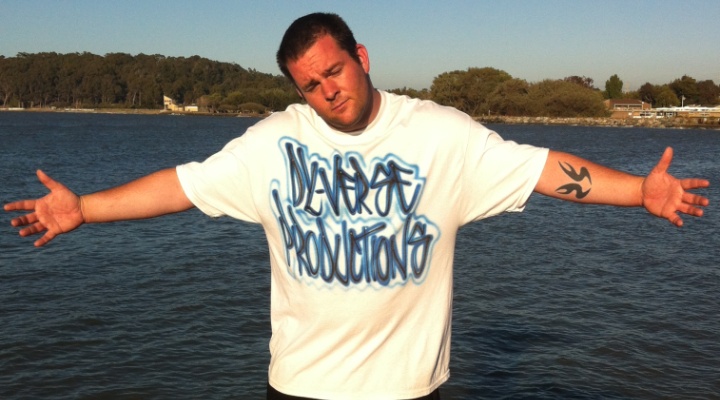 My name is Justin Barwick. I was born in San Mateo, CA. In High School, I was volunteering at the Boys and Girls Club. My friend Danny and I were leaders of the Teen Club and were able to run events and have meetings. We became good friends and realized that one of our interests was in music. Soon, we started promoting for mainstream artists, by posting flyers, posters, and touring with the artists. We started a promotions company called Hardlife Entertainment.

After a few years of networking with people and artists, I noticed that a lot of local talent needed and wanted to be showcased. So, I decided to branch out and work with these artists and formed my own record label – Dy-verse Productions.

What do you do?

I am executive producer of Dy-verse Productions. I run the in and outs of the label including promotions, networking, and setting up appointments. I work with the artists and other promoters booking tours, setting up radio and print interviews, reviews, and other PR.

Some aspects of being part of Dy-verse Productions include emceeing, hosting showcases, working on music videos, and doing visuals to expand our label. I also put together two compilations available worldwide throughout online and physical stores.

How long have you been doing it?

I have been in the music industry since 2001; however, I didn’t start my record label Dy-verse Productions, until 2006 when I released my first compilation, “Sweatpants n D-bo’s A Mateo Compilation” and my label became official. So basically, I’ve had Dy-verse Productions running for 8 years.

What ignited the spark in you to start this business?

I think it was going to a show featuring local artists and a few mainstream acts. I was able to be a part of it and was backstage, and I saw the parts of the music business that I had never really paid attention to.

I felt it would be a good fit for me to expand and help the independent musicians grow past a local fan base to achieve a wider audience.

How do you earn money?

I earn money though sale of physical CD’s and our digital releases available online and directly from us. Plus, I earn money through sales of tickets and being part of concerts and showcases.

Who is your target customer?

Anybody that has interest in music. Although our music is mainly hip-hop, rap and R&B based, we’re expanding with diverse and unique styles that have the potential for success in mainstream music.

It varies on a day-to-day basis. Maintaining a relationship with our fans is very important. We have a mailing list and websites updated constantly with information and news. On any given day, we could be filming for a music video, making a new visual advertisement, recording tracks for upcoming releases, or researching for new marketing opportunities.

Other daily activities include performing live and doing a DJ set. Dy-verse Productions also has a podcast, and show on Youtube called Dy-TV. This channel features independent artists and it showcases their talent.

How many people do you employ?

Dy-verse Productions works with several artists, producers, graphic designers, DJ’s, and street team leaders. Some artists and industry people feel that a contract is needed to represent our label. Although I have not “signed” these artists, anybody that wants to represent Dy-verse Productions can represent us. I am looking to help these artists expand their music, while expanding ours.

What’s the one trait you look for in a new employee?

Motivation to expand and do things that will help the company and the artist as a whole.

I think the ability to release projects as digital releases. There are a wide range of DJ’s, podcasters, bloggers, and You-tubers that support independent artists by playing their music and promoting their names.

What has been your most successful form of marketing your business?

The internet has made waves for people to market their product, but i feel that grassroots marketing is the moat successful from of marketing. I can see the reactions from the fans firsthand.

Two things really stick out for me. First, it was when I was a host of my own radio show on KZSU Stanford 90.1 for three years. The other was the release of my first compilation album. Because of the sales of that CD, I was able to release a follow up “The Levey Vol 2.”

What do you feel is the major difference between entrepreneurs and those who work for someone else?

The major difference between them is the time spent working for the company. If an entrepreneur wants a day off, he does not have to request it weeks in advance. The downfall is that the man hours one has to put in are way more than the average 9-5 worker. Most of these hours come without pay.

Dealing with the drama of egotistical artists and separating the fact that the artist and the person are like different people and having to deal with both of them in different ways.

If applicable, where did your organization’s funding come from and how did you go about getting it?

All the funds for the record label come from sales and shows, along with working a regular job to fund most of the expenses.

What is your greatest fear and how do you manage it?

That all of the work I’ve done for the music and the label leads to nothing. It’s hard to manage it, but i realize that it all counts for something if people listen and buy.

What’s the one thing you do that you feel makes you successful?

When I make new music or visuals and people notice it and tell me about my own label.

I like to watch wrestling. I like to watch TV, workout and I also like to collect Star Wars Movies. I’m mainly looking for opportunities for my label – this takes a large portion of my free time.

What book has inspired you the most and why?

The Bible. It’s basic instructions before leaving earth, and God’s Words are very important to me.

What can you do to expand your label?

I think opening up to more people and getting the artists to focus on more aspects of promotion in the current state of digital music including blogging, podcasting, DJ-ing, vine, and twittering. While at the same time, combining the old school way of promoting with the new school ways.

Who are your influences in business?

Are you willing to be a mentor?

I could give advice and stories of my record label. Contact me through email – djripridah74@yahoo.com.