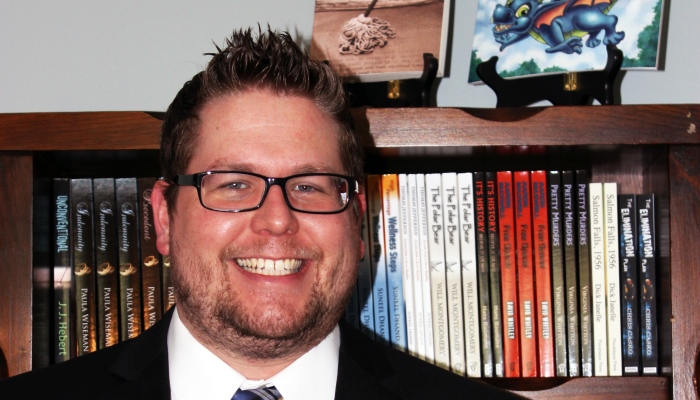 J.J. Hebert is an American author of two bestselling books, Unconventional and Weepy the Dragon, both published by Mindstir Media. Unconventional was a near-instant hit on Amazon.com, landing on numerous bestseller lists such as Christian Fiction and Inspirational categories, in the first few weeks of publication in 2009. The book’s early success on Amazon.com catapulted the title onto Amazon’s Hot New Releases and Movers & Shakers lists. By 2011, Unconventional had been a #1 Inspirational/Christian Fiction bestseller on Amazon several times and was also a Top 100 bestseller. The novel has sold over 100,000 downloads/copies and is known as one of the most successful self-published inspirational books on the market. Goodreads.com, owned by Amazon, voted Unconventional as one of the Top 5 Best Christian & Inspirational Fiction books. Unconventional centers on James Frost, a janitor trying to become a published author. The book follows Frost’s journey to publication and shows how he finds love and God along the way. J.J.’s second book, Weepy the Dragon, has enjoyed time as a #1 Amazon bestseller in Children’s Dragon Stories as well as the Children’s Emotions & Feelings category. Weepy the Dragon is about a dragon, Weepy, that doesn’t fit in with his peers. He’s an emotionally fragile dragon and he cries often. Ultimately, his weakness becomes his strength and he sees the value in being different.

Hebert is also the owner of Mindstir Media, a full-service book self-publishing company founded in 2009. Mindstir Media was launched after Hebert saw the need for it; aspiring authors inundated him with requests to help replicate his success of Unconventional. Paula Wiseman was one of Mindstir’s first clients. Her debut novel, Contingency, was published in 2010 and became an Amazon bestseller in multiple categories and also went on to win a couple literary awards, including the 2011 National Indie Excellence Book Awards. Paula has since published eight novels with Mindstir Media, and her ninth will be published in 2017. With J.J. Hebert at its helm, Mindstir Media has published over 400 titles to date. He oversees the publication of all Mindstir Media titles and acts as a mentor to all Mindstir author clients.

The success of Mindstir Media really hinged on the success of my book Unconventional. Without the book’s success, there would be no Mindstir Media. I started the company with $700 allocated for it and I grew it into a national brand through social media marketing, SEO, PPC, word of mouth, book sales and repeat business. My goal with Mindstir Media has always been to be a safe and author-friendly environment for authors and to help them succeed with their authoring efforts. Early on in Mindstir’s life, I thought if I could just contract ten or fifteen authors, the company would be self-sustainable and healthy. Through Mindstir Media, I’ve actually had the opportunity to reach and help thousands of authors through consultations, services and social media such as my self-publishing and book marketing blog.

I make the bulk of my money on book sales, publishing, and marketing services. Mindstir Media is somewhat selective regarding its clientele. I like to work with authors that generally see writing as a career and therefore are willing to put in the time to collaborate on marketing their books with me. I see my relationship with my clients as being a partnership in a sense.

Mindstir Media was profitable by its second full year. Initially, to get the company off the ground, I used mostly organic social media marketing – and back then, Facebook didn’t limit the number of fans that could be reached organically. Facebook was a great tool to get the company going, but ultimately what pushed Mindstir over the hump were SEO and PPC. I took some courses on SEO and handled all the on-page SEO for the Mindstir Media website and then earned some high quality backlinks. This helped my site’s rankings and increased sales within a few months. The real magic bullet was PPC (pay-per-click) advertising. I was able to capture sales leads much faster with the PPC approach. I saw PPC as more of a short-term sales effort versus long-term with SEO. All of these items helped to create and keep profitability for my company.

I think every entrepreneur has had doubts, whether they admit it or not. Entrepreneurship is not for the faint-hearted, that’s for sure. About a month before I discovered PPC advertising, I seemed to have hit a brick wall in terms of growth. Organic social media and SEO had taken me as far as it could at that time… That was when I encountered most of my early doubts. I wanted to grow but had never done it before. I stumbled upon PPC on a blog that I can’t seem to recall, and then I started some campaigns. The campaigns were awful initially and I lost my shirt. I spent hundreds of hours reading books on PPC and refining my ads. Over time, the ads and their performance improved and I was able to grow my clientele and profits significantly.

Facebook. Remember, that was 2009 and early 2010, so the Facebook platform was much different back then. I was able to reach more people for free.

I kind of alluded to it earlier, but I’d say that Facebook Ads are working very well these days. There are tons of targeting options on that platform now, so I’m able to narrow down my ads to the right audience and serve up relevant ads for cheap. Many businesses refuse to pay for Facebook ads, so that makes the competition less fierce than on other platforms.

Budgeting is always tough for any entrepreneur. I had been testing a new lead generation program that just ultimately didn’t work out. I was torn over it because I had been so hopeful. But I decided to eliminate it and move on.

I’d like to think that talent plays a role. Honestly, though, I think maybe 10% of success is talent-based, maybe 85% drive, perseverance and hard work, and 5% “luck,” which I’ve always felt is more about being prepared and in the right place at the right time rather than just hoping that things will improve on their own.

There are many, but one publishing deal in particular brought in a lot of money for Mindstir Media upfront and over time. The author saw the value in one of my highest end publishing options and I was able to make he and I a lot of money through the book sales on the back end. I try to make all my business relationships mutually beneficial. I believe that’s the key to good relationships in business and life.

I’m hoping to see record growth here at Mindstir Media in 2017. We grew substantially in 2016 through some of my new and improved marketing efforts, which I plan to continue aggressively in this new year.

The 4-Hour Workweek by Timothy Ferriss had a big impact on my business. Also, Crush It! by Gary Vaynerchuk. The former introduced me to the concept of virtual workers. The latter helped hone some of my social media strategies.

I joined some chambers of commerce and got active there. I had always thought chambers of commerce were old-school, and they are, but the ones I joined have fantastic websites with good domain authority, so just the backlinks alone helped the Mindstir Media website. Plus, I’ve received some old-fashioned referrals.

Is there anything new you’re working on?

Mindstir Media just rolled out a new charities website at the end of last year. My company and I are involved with eight charities, five of which are literacy charities. Instead of just giving, I felt compelled to create a website to show Mindstir’s favorite charities and encourage others to give to them.