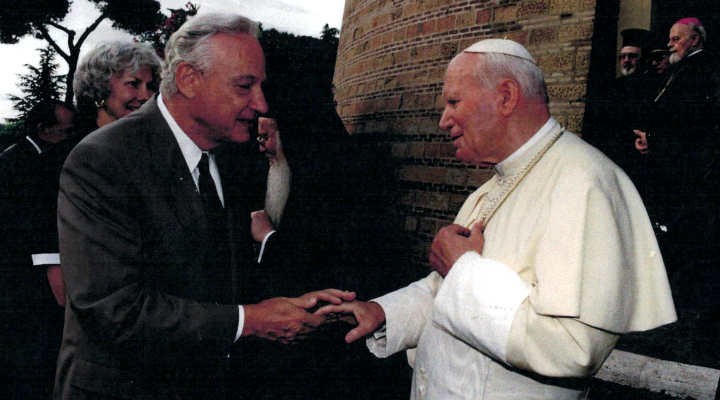 James A. Regas is a well known Chicago Attorney who has effectively used his legal profession as a platform for his many civic and charitable endeavors. His accomplishments have brought him a number of local and national accolades and awards.

Mr. Regas served for many years as Chairman of the Western Policy Center, a Washington-based think tank. His role was to create a forum for discussions relating to the peace and stability of the countries in the Balkans and Eastern Mediterranean Region.

In the late 1970’s, he purchased the Illinois Central Railroad Hospital, a private hospital, and transformed it into a nonprofit operation. It was renamed the Hyde Park Community Hospital and served a primary minority population. As a result of his effort, he received the Brotherhood Award from the Chicago Conference of Brotherhood.

He also served as President and a member of the Board of Directors of the Spiros Basil Vreninos Center, a Sacramento, California center for the study of Hellenism

For his work in the Greek Orthodox Church, he was awarded the title of Archon in the Holy Order of St. Andrew, the highest honor a layperson can receive in the Greek Orthodox Church. He was also a member of the Archdiocesan Council of North America and was a recipient of the St. Paul Medal. He was also an executive board member and legal counsel for “Leadership 100”, a national affiliate organization of the church.

On May 4, 1997, he was awarded the Ellis Island Medal of Honor, in recognition of his community service, an award bestowed on seven Presidents of the United States. Mr. Regas was also recognized on Who’s Who List of influential individuals. He has received several other accolades and awards for his civic and charitable work.

He also served on many organizations in his hometown of Oak Brook, Illinois, including the Civic Association Homeowners Association, Police and Fire Commission, Police Pension Board, Zoning Board and several others. Mr. Regas served in the Army Reserves until 1957 and was honorably discharged as a Sergeant First Class, Civil Affairs/Military Government.

What achievement in your life are you most proud of?

There are many achievements that I am proud of. Perhaps the one that gave me the most satisfaction was the purchase of the Illinois Central Railroad Hospital, which I transformed into a non-profit community hospital. As a result of the conversion, we were able to provide primary medical services for thousands of families in the Hyde Park area.

What prompted you to become so involved in the preservation of Greek culture in the Chicago area?

As a Greek-American. I wanted to preserve our American experience because Chicago was a gateway for many Greek immigrants who arrived in the United States. It is important that their children, grandchildren, and great-grandchildren know the history of their ancestors who came to America and their struggles to achieve the American Dream. This teaches them family and societal values that are passed down to each generation.

You’ve focused much of your effort preserving Greek culture in the area surrounding the Haisted/Madison Street corridor. What makes this specific area significant?

During the turn of the century, more than 50,000 Greeks came to this region to start a new life in America. Historians initially called this region the Greek Delta, which includes the Halsted/Madison street area. The area is the original Greektown. I wanted to focus on this region because I felt it represented an essential part of the culture our forefathers created and that we wanted to preserve. As President of the United Hellenic American Congress, working together with the City of Chicago we undertook substantial renovations in the area. As a culmination of our efforts, we eventually wanted to construct and maintain a Greek Museum and Cultural Center. That has now become a reality.

Have you ever faced any challenges in the efforts to preserve Greek culture? How did you overcome these challenges?

When I was negotiating with the City of Chicago to renovate The Delta, there was the challenge of getting enough funding for the project. After a lot of negotiating, I contributed some of the funds to pay for the project, and Chicago officials funded the portion that primarily dealt with the area infrastructure. In a city known for its amalgamation of ethnic cultural areas, we and the city officials agreed that it would be a significant achievement to herald our culture and its contribution to the city and country.

Tell us about your involvement with the Hyde Park Community Hospital.

When I was president of Hyde Park Community Hospital. I initiated the first surgical teaching program for minority students and residents. I also changed it from being a tertiary hospital to being a center to treat primary care patients. I achieved that by modernizing and expanding the hospital to include clinics operated by the University of Chicago in a plastic and reconstructive surgery center, along with a dialysis center. We also established a unique relationship with the University of Chicago Medical School, which allowed for the further expansion of the operation of the hospital. This allowed residents and interns to matriculate in both hospitals. We received the proceeds of an eighteen-million-dollar bond issue sponsored by the Cook County Board of Commissioners to undertake our expansion. We provided primary medical care to the minority community in Hyde Park and surrounding areas. I received the Brotherhood Award presented from the Chicago Conference for Brotherhood for my efforts in establishing a community hospital.

What inspired you to become involved in the Western Policy Center? What type of work did you do there?

I was interested in various policy issues that affected the countries in the Southeastern Europe, which included Greece. Any adverse change in the region could also affect the interests of the United States. Input in creating policies that bring peace and stability to the region was in the best interest of everyone. Being a part of the Western Policy Center was an extraordinary opportunity to implement these policies.

ln my capacity as Chairman of the Board, we undertook research, analysis, and discussions involving political, economic, and security interests relating to the region. Included in the discussions that were held were heads of state, ambassadors, political leaders, state department officials and scholars from the various countries of the region and the United States. Much of the research and analysis which formed the basis for these discussions was undertaken by the staff of Western Policy Center.

How did you handle the merger of the Western Policy Center with the Woodrow Wilson Center?

I thought this was a excellent opportunity for us to enhance our mission, which was to create dialogue on policies that would be beneficial for countries in Southeastern Europe and in their relationship with the United States. We wanted to collaborate with like-minded politicians and scholars who were just as passionate about helping the world become a better place. I was confident that we could make contributions in keeping that part of the world more stable and peaceful, especially in a region like Southeastern Europe that has a history of ethnic and political tensions.

How did you make your law firm, Regas, Frezados & Dallas, successful?

Integrity, hard-work, and the dedication to meet different challenges that arose with each client we worked with. I practiced law for 58 years and I learned that being the voice for people who cannot speak for themselves has given me a sense of purpose. I improved this work ethic with each case I took. This became the founding principle of our law firm. It was the work ethic and drive to help others seeking redress or justice that was behind the success of our firm. It also provided a platform for much of the civic and charitable work I became involved in.

What has been your mission in life?

My mission in life was to be true to my profession, my faith and the values of my heritage which fostered public service and charity. My family life is emblematic of these values.

Connect With James A. Regas: