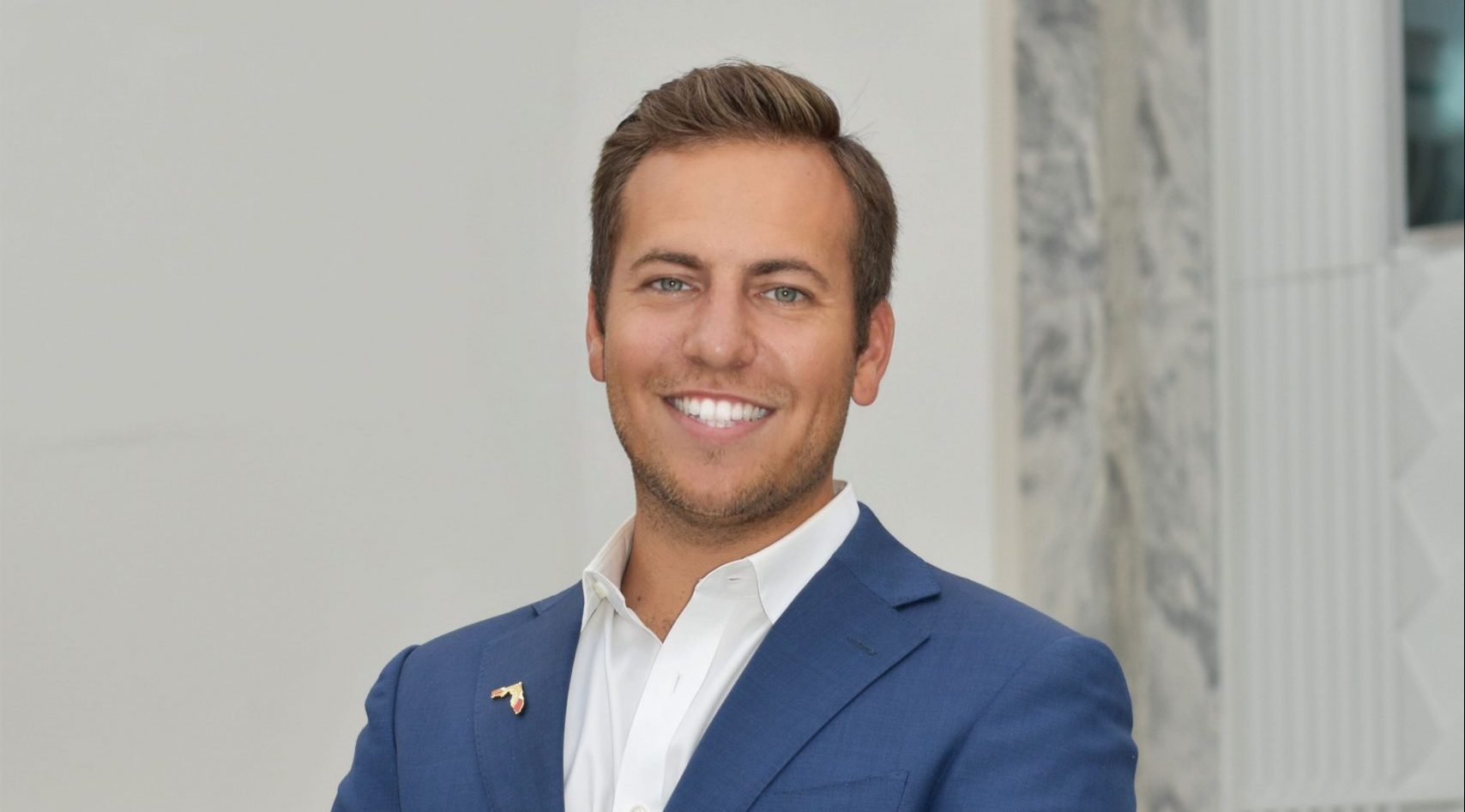 Jake Hoffman is the co-founder and CEO of Invasion Digital Media, a Tampa-based company that helps athletes, celebrities, and influencers create digital training courses, predominately in the fitness industry.

He attended the University of South Florida, where he completed his undergraduate degrees in Political Science as well as Communication. Aside from that, he also secured a Master’s degree in Entrepreneurship from the same institution.

Outside of his professional work, he devotes most of his time and efforts to making Florida and the United States the best places to live. He is a young political leader who is passionate about making a difference in his community.

For the past three years, Hoffman has led the Tampa Bay Young Republicans organization, growing the club to over 300 members and taking on several local political battles within Tampa Bay. This activity garnered the club the award for the Best YR Club in the United States in 2020.

In addition to leading TBYR, he is also an official ambassador for Turning Point USA and a candidate with Run GenZ, a newly formed organization that mentors young people running for office.

Furthermore, Jake is the host of a conservative podcast, called “Moderately Outraged,” in which him and his fiancée, Michelle Sassouni, started during the pandemic and has quickly grown across social media amassing 50,000 views per week.

Jake is motivated to run for office after watching his business along with millions of others be shut down overnight by overbearing politicians with no plan and no care for their livelihoods. He has been actively working against local shutdowns as soon as they were announced and has continued to fight what he considered unconstitutional overreach on several fronts.

How did you start your career in politics?

Since one of my majors back in college was Political Science, I spent my internship at our local Hillsborough Board of County Commissioners. I truly enjoyed every bit of it and wanted to continue participating in local politics, so I became a member of the Tampa Bay Young Republicans (TBYR).

Not long after that, I took over as the club’s President and I’m not one to take on a project without giving it my all, so it quickly turned into a significantly larger organization that not only hosts massive events, organizes protests, and helps elect candidates for local office, but makes a cultural impact in the Tampa Bay region particularly through social media.

I’m running for the Florida State House of Representatives in Tampa because I’m certain that I can make a greater contribution to our community if elected to the state legislature, where I believe I will be able to produce more impactful legislation addressing the most pressing issues in society while assisting those who were significantly impacted by the pandemic by ensuring they never face the same type of tyranny in the future. I’ve been telling people, that if we can have this outsized impact through a Young Republican organization, imagine what we can do if I’m actually holding political office in the State House?

What is your favorite thing about being a leader?

My favorite thing about being a leader is teaching. I’ve always enjoyed passing on tidbits of knowledge to kids and teenagers. It’s the reason I’ve been involved with Junior Achievement for the last three years as well, because they give me the opportunity to get into classrooms every so often to provide lessons directly from entrepreneurs in the real world.

What are the top 3 traits that make a great leader?

Some of the top traits that make a great leader are:

What inspires you as a leader?

Recently my biggest inspiration has been all of the outpouring of support in private texts, emails, DMs, and in person thanking me for being so vocal about the state of the country. Many of our peers feel fed up with the way the world has been overtaken by draconian public policy or how their workplace has become a woke minefield, but they fear speaking due to job loss or public scrutiny. As long as we live in a country that lambasts conservatives for their viewpoints, I will be inspired to fight for the rights handed to us in the US Constitution.

What is one of the biggest challenges you’ve faced so far and how did you handle it?

Like everyone else, COVID has been a huge challenge for me personally. I’ve had to cancel my wedding twice, seen my business profits plummet overnight when they shut down every gym in the country, and I’m still expected to wear a mask in most states after two years of lackluster data legitimizing such restrictions. The dehumanizing effect of the pandemic is weighing on us all, and I’ve personally handled it by continuing to live my life as if the pandemic doesn’t exist. When I got sick, I stayed home, and other than that, I’ve never slowed down or stopped living my life and those that kept that attitude probably are a lot happier today.

What are your thoughts on the current state of politics?

In a word – disastrous. The Biden administration is by all accounts a complete and utter failure, but to be honest most of the leaders we’ve had dating back the last 30 years have also been disasters both Democrat and Republican. Both parties have massively expanded the federal government and bloated the bureaucracy, failed to fix broken systems like immigration and healthcare, exacerbated our debt to the point of currency collapse, and neglected basic needs of the constituents because they’ve been too focused on foreign wars. America is falling victim to the same mistakes that Rome made when it collapsed, but if we get enough libertarian minded conservatives in office, we may just be able to reverse course before we head off the cliff.

What are your political views?

I am a fiscal and cultural conservative, but I’m also socially a moderate. I’ve always considered myself a libertarian because I believe in individuality. I believe that people can make their own decisions and it isn’t the government’s place to interfere unless it involves protecting people or property.

I strongly believe in shrinking the size and impact of government in your life whether that be regulations on home building or making policies restricting gay marriage. You do not need big brother to tell you how to live your life and history has shown, they usually don’t know what’s best for you or worse…are lying to you. Every bill that crosses my desk, I will ask myself, “Does this make people more or less free?”, and if all politicians took that approach, we’d have a better society.

The biggest issue in the country, including Florida is the impact of inflation. All of the other issues people are upset about, such as rent increases, healthcare, insurance increases, and economic uncertainty come from the monetary policy taking place in the federal reserve and the spending spree in Washington D.C. However, I would change my answer to “lockdowns and mandates” if I lived in any other state.

What do you think are the biggest challenges facing young people today?

There are a lot of challenges that young people face today; our generation is the first one in history worse off financially than our parents’ generation. Home ownership has becoming nearly impossible for young people to participate in, particularly in major cities and there are ways for us to adjust policy to fix that. The Baby Boomers and older generations have benefited greatly from asset appreciation through their lives, as once again our dollar is devalued and real assets are rising. For example, every older person in Florida has seen the price of their home or multiple homes 3x-10x over their lifetime simply because of demand, but our generation just wasn’t old enough to be purchasing homes at the right time to experience the same benefits.

In addition, we also need to find ways to make our political process more inclusive and accessible for young people. Too often, we see that young people are not given a voice in our politics, and are often ignored.

What do you think can be done to increase youth engagement in politics?

There are a lot of things that can be done to increase youth engagement in politics, but I believe that we need to start by making it more fun. Our attention spans are short and actual political process is usually pretty boring. That’s why we’ve had so much success with the Tampa Bay Young Republicans, people enjoy being engaged with groups that listen to their opinions, get things done, and have fun at the same time.

What have you learned from your experience being both a leader and member?

Good leaders take advice from their team members, and good team members speak up to their leadership when they have conviction. The same goes for politics, our leaders need to be able to listen to their constituents when they want change.

What advice would you give to aspiring leaders?

My advice would be to never give up and to always stay focused on the issues that matter despite any political pushback you may receive.

In addition, I would also advise them to be respectful of others, even if they don’t agree with them, and to always lead by example. It’s really easy to let things devolve into a gross Facebook argument nowadays, learn to debate civilly and in person.

What is your favorite quote and why?

“You can’t be a real country unless you have a beer and an airline – it helps if you have some kind of a football team, or some nuclear weapons, but at the very least you need a beer.”

I’ve always loved this quote because it’s obviously silly, but there’s actually some larger geopolitical points being made.