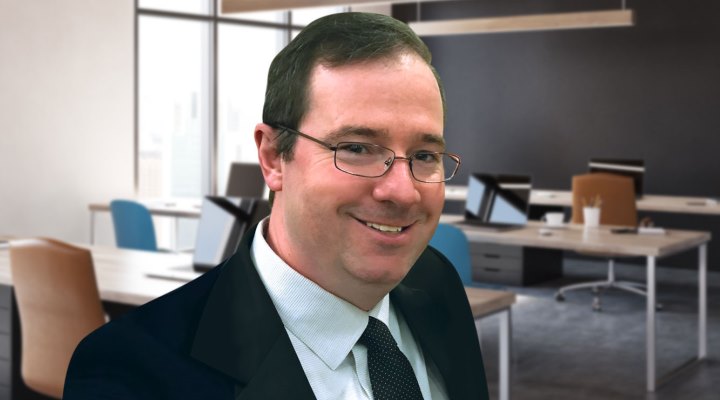 Gary LaPlante is a veteran broadcaster with more than 25 years experience. He has been a newsroom executive for stations owned by companies such as CBS and FOX. Most recently he has been a manager at three different television stations in Boston.

Gary is a 3-time Boston/New England Emmy ® winner – and has been nominated four times in the last two years. He has also been part of news teams that have won numerous Murrow and Associated Press Awards.

Gary LaPlante is a married father of three. His focus in life is his wife, two daughters, and his son. Gary and his family love to travel – their most recent trip was to the Dominican Republic – where the kids loved the combination of playing in the pool and the warm ocean. Gary’s family also spends much of their summers on Cape Cod.

How did you get started in the media and communications industry?

A high school friend told me about a Boy Scouts program called an “Explorer Post” at a local radio station in Woonsocket, RI. I had always been fascinated with television and radio, particularly sports, so I signed up. It turns out it was a brand-new group – so everyone was a rookie. At the first organizational meeting – the General Manager Dave Richards of the radio station, WOON, asked us what our primary interest was. Some chose news, others chose music, some chose board operation – and I chose sports. I liked news too – but there was a cute girl who chose sports. She would later become my girlfriend, but that is another story for another day. After that first organizational meeting, the second meeting was baptism by fire. I still have the cassette tape of my first ever radio sportscast. The first words I ever said on the radio were “In NHL action”. It is a day I will never forget.

Who or what inspired you to get into this industry?

Following my time with the “Explorer Post” – Dave Richards invited three of us to become members of the staff. That cute girl, her current boyfriend, and her future boyfriend, me. But that’s another story for another day. Dave really inspired me to get into the industry long term. He had such an enthusiasm and a passion for it. Actions speak louder than words and you could tell from everything he did that he loved the business so much. And by the time I met Dave in 1992 – he had already been at the station for 20+ years. He’s still there – 47+ now. He was the hardest worker. He would be at the station morning, noon, and night. He was always raising money for local charities like “The Milk Fund”. And that shaped my own work ethic. He had a couple rules that I still teach people today – “Know your tools” – “Call for help”. Kind of reminds me of Bill Belichick’s “Do your job”. Except Dave smiles a lot more than Belichick. I wonder if Dave’s rules are still posted at the WOON studios?   I ran into him once since the old days – at a restaurant in Woonsocket that closed long ago. One of my great regrets is never telling him all of the things I just told you after I found success. I think I am going to pay him a visit. Thank you for reminding me of him. He is a great man.

How long did it take you before you found success?

Success can be hard to define. My personal definition is happiness. I may have been making minimum wage in that first job back at WOON – which was something like $4.45 an hour back then- but I was happier than a “pig in your know what” playing songs off of vinyl, some off CD’s, and some off of carts – which looked like 8 tracks and were in their dying days back in the early 90’s.

Following college, I had two professional goals – be a News Director by the time I was 30 – and be a News Director in Boston by the time I was 40. I accomplished both – one turned out to be a great experience – the other didn’t turn out how I had hoped – but I certainly learned a lot. Was I happy in that job?  Absolutely not. So it fails my own definition of success.

I consider myself to be a fantastic writer now – but that wasn’t always the case. I would say I was average in the early stages of my career – which honestly won’t get you very far in this business. That is until I arrived at WHDH in Boston in 2001 – the first of two tours at that legendary station. The Executive Producers at the time, Dana Dieterle, Nina Bradley, and Linda Miele, who is now the long time News Director at the station – are all great writers themselves – and also patient teachers. I became better fast. Honestly failure to get better was not an option there. At the time the station’s 11pm newscast was a dominant #1 – and I had my eyes on producing it someday. That someday would end up being just a couple years into my time there. Dana and I teamed up to win every major ratings book that we were together on the newscast – and we won the 2002, 2003, and 2004 Boston/New England Emmy ® Awards for Newscast Production.

How did you handle your first major challenging project?

The first major project that I can remember is rebranding our college television station at Ithaca College. The 3 night a week newscast had been known for a while as “The News Tonight”. Radio Hall of Famer Cousin Brucie Morrow did the voiceover for the newscast and the music was all from Yanni’s “Live at the Acropolis” album. I loved Cousin Brucie (his daughter was a classmate) and I still love that Yanni album to this day. But it was time for a change.

I was the News Director of the College Television station – and the way I handled the rebranding was to assign each task to someone who was passionate about it. The new brand would be “NewsWatch 54” (we were on Channel 54). College stations have somewhat small budgets – so students would do all the labor. My housemate at the time Adam Kranitz built the new set – including carpentry and painting. Another student designed the new graphics. I chose the new music from a professional package because I believed and still believe that the right music can really add to a newscast.

What is one business or marketing strategy (other than referrals) that you’re using that works well in this line of work?

This may be an obvious answer – but I think all forms of social media are essential. And it is a two-way street.

First, you want to be a viewer’s source for news and images on as many platforms as you can be – the big players like Facebook, Twitter, and Instagram – but also on some of the smaller platforms that younger folks are using. If you are a viewer’s trusted source for news – then you want to be that source everywhere. Might it stop them from turning on the TV some nights because they already got their news from you online?   Sure. But that is way better than another organization stealing your loyal viewer because you are not doing a good job on social media.

I mentioned social media is a two-way street. That’s because viewers can also send stations content too. More and more people are doing it. Everyone has cell phones and most of those phones can take high-resolution video. The more loyal social media users you have, the more chance you have of someone sending you video of that fire you are not at, or that flooding video that you couldn’t get to. Social media really is changing the business, and I think this is a positive change.

My work ethic – and my focus on teaching others. I mentioned the man who gave me my start in broadcasting earlier, Dave Richards. My mother, Joan LaPlante, was the one who drove me to WOON back in the early days because I didn’t have a car right away – and she has also been a huge influence on my life.

Mom taught at a public High School for 30+ years – and ended up teaching college for 10+ more as a “retirement job”. Teaching is her passion just like radio is Dave’s – and I saw that in her everyday. She also taught me the patience to be a good teacher myself. As a manager, if you can’t help your team get better at what they do, you are not a good manager.

It is very hard to narrow it down to one.

Being on the field right after the Patriots won their most recent Super Bowl probably takes the top spot. I was working at WHDH at the time and we had been doing very well in viewership all week – then the team won the game. I got the chance to interview MVP Julian Edelman on the field. I stood next to Tom Brady outside the New England Patriots locker room as he held the Lombardi Trophy. As a long time Patriots fan and a proud television producer, it was both a personal and professional victory.

Being dominant in late news during my first stint as a News Director at the Fox station in Albany, New York was very satisfying.

And being involved in the production of major Boston events like the Boston Pops 4th of July Fireworks Spectacular both at WBZ and WHDH was certainly a career highlight. I was in the production truck for the “1812 Overture” when I was at WBZ – I got chills.

My next position is one where I can teach people about television and share my passion. That could mean current professionals, students, or even community members – but I am looking forward to having more time to teach.