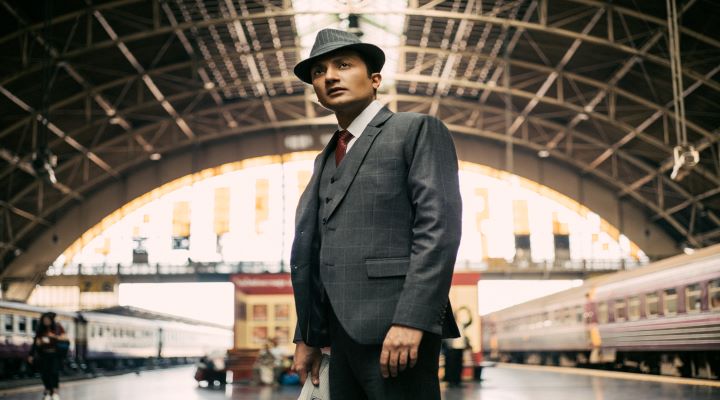 Franklin Livingston is a Pakistani born American actor. He specializes in dramatic roles and has proven his acting abilities in the more serious genres of film, including comedy. Franklin was born in Rawalpindi, Pakistan and moved around the area before moving to the United States around the age of 18. In the United States, he gained extensive training from Atlantic Acting School, and the Meisner Studio of Tisch School of the Arts at New York University. He also received training in filmmaking and directing from New York University, New York Film Academy and Yale University. Franklin did not receive teaching from schools based exclusively in the United States, he also trained at Guildhall School of Music and Drama London and Moscow Arts Theater.

Franklin has had a very unique opportunity to represent a growing number of Pakistani population in the U.S. which is underrepresented in Hollywood. Currently in Hollywood’s big budget movies and TV Network Productions there is no one of Pakistani origin that has the training Franklin has. Franklin has extensive training from high level professionals in the areas of drama and the more serious cinematic roles. In films made in the United States, there are no such leading roles being filled by Pakistani born actors that are qualified. Franklin has devoted much time and effort into acquiring the needed training and expert guidance to fill these roles.

Franklin is the American actor with his particular skills and background to proudly and personally take on the privilege of shedding the light on many important issues. Like that of representation or the sociological issues faced by recent immigrants. Franklin wants to change the way stories are told in America while empowering heroes. He wants stories to be told that tell people heroes don’t have to be fictional or over the top good-looking men and women. He believes heroes are born among average people, and they live among us, helping us on a day-to-day basis, making our world a better place.
Franklin not only wants to help those stories be told, but he wants to be the one acting that story out on screen. With his voice, his body, and his skills that he has been honing, he can show people they have been waiting for a strong dramatic lead like him, but they simply haven’t even realized it yet.

Franklin is a gifted actor, filmmaker, and producer. Franklin is a very empathic person and loves being an active member of the community through his participation in social justice-based activities. He also enjoys cooking, traveling, sightseeing, motorcycling, driving through states, and jet-skiing.

Franklin has observed the way other actors with brown skin have gained some headway, but they have typically done so through a particular type of comedic role. Even still, most of these actors tend to be from India and not from Pakistan. Although Pakistan and India share some commonalities, but its cultural, languages, habits and social etiquette make them distinctly different nations which Hollywood is yet to showcase in its productions. This difference is not unlike those the British and Americans have in terms of their anthropology.

The vast numbers of people of color in the U.S. and a significant community of Pakistani immigrants in the U.S. have waited long to see themselves in the Hollywood movies and TV shows with a true representation. Franklin Livingston is up for this challenge, and that day is not afar when Franklin will be telling stories of Pakistani Americans through his outstanding work in films and on TV.

I have had a passion for acting since I was a young child. My love for performing arts developed during childhood, my mother told me I used to imitate radio songs when I was just one and a half. By the age of two, I used to accompany her to music lessons where she taught singing. By the age of 18, I was performing at theatrical events and was involved in performing in musicals along with my friends who had a theater company. I went on to gain as much training as possible from some of the greatest instructors and universities. I really gained a profound passion for the art of being an actor, and I fell in love with the more serious genres as well.

Early on I learned, it’s not easy to survive as an actor unless one is a mega-star. I have serval businesses which help pay my bills.

I was not ever financially profitable in my first year of acting. There are some expenses involved in being an actor. There is any training you receive, of course, that you pay for. Your degrees from any University, if they are acting related, and then there is the Screen Actors Guild and other memberships like that. To showcase your talent, you got to have good headshots and reel which is a huge investment, especially if don’t have thousands of dollars extra just sitting in your bank.
Thankfully, unlike other businesses, you don’t have other overhead costs like a large office building and things like that. So, acting can be a profitable venture if you’re able to keep your initial investment at a reasonable cost and are fortunate enough to find jobs pretty quickly. I know some actors who have made a career out of just background work. It all depends on you, what type of actor you want to be.

I did not have doubts, but I was discouraged a lot. I was always discouraged based on my ethnicity. My acting teachers were generous in the classrooms, in the roles they gave me, but we would have conversations about how the real world doesn’t work on ability, they work on appearance and connections. They want their million-dollar movies to sell. Here is how I handle it: I take good care of my body by consuming low caffeine, no alcohol, getting a good night’s sleep, no smoking, and many workouts. Change is not easy, people in the world that have brought change have always been in the minority. If you believe in something, you have to fight and keep going for it, at the end of the day you are the only one that can help yourself. So take great care of yourself and keep fighting for what you believe in.

Well, in my case it would be more, how did I get my first acting role, I guess. My ever first role was on an indie film I don’t even remember the name of. I joined a casting director 5-week class in NYC who promised the students that they’ll to get a speaking role after the training on one of the local projects. I got a role in a film which was being filmed in Brooklyn. I went to the set and realized my job was only to hold a bowling ball and swing it when required. That’s it. No dialogue. I was paid $25 for half of the day. I had no clue what the movie plot was, what were the given circumstances, the conflict and resolution among the lead characters. All those things I learned in acting schools.

I have a website, and a couple of social media outlets that I use to market myself. I think it is an excellent tool for actors to showcase their abilities, past performances, give more information about what makes them unique. Along with that, I would say to make sure that you are promoting yourself as much as possible. People can’t come to know you, love you, and spread the word about you if they can’t find you.

Not applying for a 6-figure job and working as an actor and filmmaker. I gave up a lavish lifestyle that I could have had based on my education and talents. However, I opted to work on screenplays to show the world this is what America looks like. We all belong to this Country. Once we come here, we can start over and pursue your dreams. That is the message I am passionate about getting out there, and I was willing to make the tough decision of turning down a lucrative opportunity so that I can continue with efforts to spread it.

That would absolutely be my passion. I love acting and I have honed my skills to become successful. My drive and my discipline also play an important role in my success as well. I am not the person who gives up easily, even in the face of discouragement or oppression. I will never stop believing in my passions.

When people tell me that I have truth in my work. I recently sent my script to Joe Greco who has worked closely with James Cameron. He read my screenplay and said “what you are doing is really great and we need people like you” I know that those moments don’t pay the bills, but they mean so much and are so validating. It helps drive me forward when others understand my vision of what America on film should look like. Because currently our great nation looks vastly different from the one, we see on films and TV.

I am excited to show the global audience that serious, dramatic roles can be played by people that look like me and have my background. I am excited for the message that will send that dreams can be achieved through hard work and perseverance. That immigrants can come to the United Stated and some day they can actually attain the same opportunities as those who were born here. I look forward to the day that roles are earned based on abilities and not on appearance. We may not be there today, but I believe we can get there, and I believe the way we get there is by encountering serious movies with skilled leading characters with more diversity.

I have always enjoyed the classics like How to Win Friends and Influence People by Dale Carnegie and Start with Why by Simon Sinek. These books are perfect for anyone wanting to learn basics like collaborating and getting along with others and then also communicating to others “why” you are doing what you do, or in other words, what drives you. As an actor, it is important to have a solid foundation of communication on which you can build your craft.

I would simply encourage myself to keep going, even when it gets discouraging. Also, to surround myself with an extensive support system of people that will help me get to where I want to be. I could not have made it this far if it wasn’t for those that believed in what I am trying to accomplish, but they can be few and far between in Hollywood. I would encourage my younger self to be sure to seek those people out.

I am willing to be contacted. You can use this link:  www.franklinlivingston.com/contact-franklin