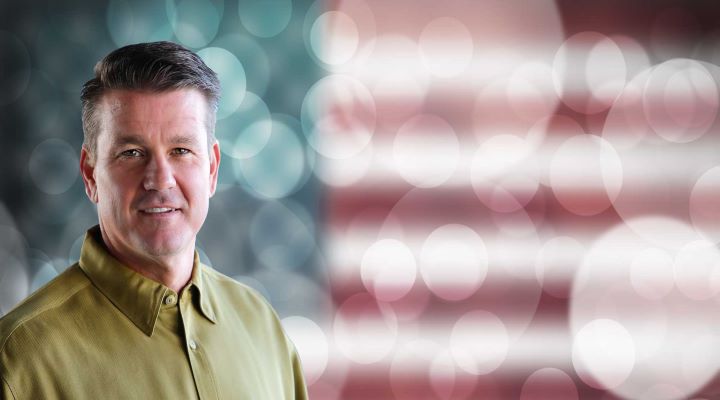 Ed Hiner is the owner of The Hiner Group, a Navy SEAL, motivational keynote speaker, and bestselling author of First, Fast, Fearless: How to Lead Like a Navy SEAL and GUTS: Greatness Under Tremendous Stress―A Navy SEAL’s System for Turning Fear into Accomplishment. In the face of adversity and challenge, Ed has developed inimitable qualities like empathy, endurance, and valor.

During his 20-year career as a Navy SEAL, Lieutenant Commander Ed saw nine major deployments in Iraq, Afghanistan, the Philippines, and around the world. During these deployments, he commanded hundreds of strategic combat missions and operations. As the Training and Readiness Officer responsible for basic and advanced combat training for the Seal Teams, Ed developed the world’s most elite organization. Working in such a challenging setting inspired Ed to develop a diverse skill set, including the ability to work calmly under pressure and to adapt to rapidly changing environments. Ed works with companies, using his unmatched abilities to mitigate fear and foster motivation within all levels of the organization, boosting both morale and productivity.

Ed graduated from Virginia Commonwealth University in 1990. He was afforded the opportunity to attend Virginia Commonwealth University after obtaining a full baseball scholarship. Ed had been raised by his grandmother and lacked a father figure during his impressionable years of youth. He struggled, and at times even got into fights. Baseball though, was Ed’s safe haven, and eventually led him to a better path.

Through his experiences in life and in his deployments, Ed became devoted to helping those that cannot always help themselves. He has made many efforts to reach children in need. He founded SEALpreneurship, a mental toughness program based on Navy SEAL principles, and he is using his 23 Evolution Program to tackle the world of public education and prison reform.  Ed is also contracted with Juvenile Court and Community Schools, San Diego County Office of Education. Furthermore, he teaches his principle of “PHD in ME,” and uses the concept of self-efficacy to help the students gain confidence in themselves, and in their ability to own the outcome of their lives. Additionally, Ed’s two books use the fundamentals of Self-Leadership to provide a catalyst for wellness, performance, success, and happiness. Ed Hiner has proven to be a strong leader with a devotion to enriching the lives of children, specifically those in the foster system. He selflessly seeks opportunities to further his efforts and motivates others to do so as well.

Could you tell me more about your background and how that led you to starting The Hiner Group?

Sure! My background as a Navy SEAL includes a 20-year career and nine deployments. I was awarded two Bronze Stars with “V” for valor and combat leadership.  For two years, I was the Executive Officer and team leader for the British Special Boat Service (SBS), serving with Task Force Black in a U.S. – U.K. joint commando operations unit under JSOC (Joint Special Operations Command).  In my role as a Navy Special Warfare Training Officer, I led basic and advanced training for all Navy SEALs on the national level, that included strategic planning and policy determination for the SEAL community.  As a SPECAT Officer I held above Top-Secret clearance involving national level strategic operations and was the first-ever Navy SEAL in recorded history to be spot promoted for a combat command for the Battle of Ramadi, known as Iraq’s Triangle of Death.

As you can see, my experience was substantial. With The Hiner Group, I use my skills, which I have honed over the years, along with the approach I have developed in combat, which is based on character and humility, in order to inspire others. I speak on topics ranging from ethos-based leadership to mastering fear and motivating people to help people, and organizations that cross the gap in performance. I have been able to train and inspire thousands of business leaders and highly valued individuals in different industries.

During your career as a Navy SEAL, were there any events or experiences that stood out to you in particular?

I was deeply affected by seeing children suffer the ravages of war. I promised myself then, that someday I would do something special to help children. After returning home, I set out to fulfill that promise and determined that I could make a large impact if I were to reach out to children in the foster care system. I have implemented programs and have also written two books that overcome obstacles to success using the essence of SEAL training.

We have one called SEALpreneurship, the program is 2 ½ hours a day over 32 days or a condensed version over seven days. We break the victim mentality, which is detrimental to the kids. Hiner said. Victims never change their life story. We teach them how to free themselves. By the end, they can define their own life story.

I also use the 23 learning elements borrowed from SEAL training. We teach how to be the cause of the effect, not the effect of the cause; self-discipline through language; physical fitness to mold the mind; fear inoculation, how to understand fear; ‘swim buddies,’ to never be alone, and we even teach how to be a student. We teach how to set goals, plan like a SEAL, implement in steps and be accountable without excuses.

The “Ph.D. in me” certificate is about self-efficacy, self-confidence and re-enforces that the students are the ones in control of their futures.

You just had a new book that was released very recently, would you like to tell us about GUTS?

GUTS: Greatness Under Tremendous Stress―A Navy SEAL’s System for Turning Fear into Accomplishment was released last month. I call it my battle-tested guide for developing resilience, overcoming obstacles, and living life to its fullest. When you are on the battlefield, you witness firsthand the paralyzing power of fear. That power can also paralyze us in many other areas of out life though. Sometimes you need more than motivation alone to overcome that power. The book tackles self-doubt, apathy, and other negative qualities that may be allowing fear to hold you back and gives you transformational guidance and abilities to help you break free from its grip.

What do you enjoy most about the work you do?

When I work as a motivational speaker, I am delighted if I can reach even one person and accomplish my goal of allaying their fears and sparking motivation within them. If I am able to do that on an even larger scale, then it is even more satisfying. I also enjoy the work I do as an author. Writing is an excellent outlet and a tranquil hobby. It becomes even more enjoyable when others want to read your publications and have found them beneficial. I would say however, that what I have enjoyed the most is working directly with the kids in the foster system. I am thrilled when I can make a difference in their lives and help set them up for success.

There were times growing up that I was tough just because I had no other choice. When you develop that kind of resilience from a young age, I think it helps you become a successful adult. When faced with difficult circumstances, I never saw quitting as an option. Instead, I would determine the best course of action and then go from there. Then, as a Navy SEAL, I was in situations where I would be facing literal life or death decisions and quitting is definitely not an option then! So, I further developed perseverance and how to make the best decisions in high pressure settings when your future heavily depends on them.

Do you have any favorite authors that have inspired you?

I had a bit of a rough childhood at times. I would try to convince myself that I was tougher than I even knew I was and that I didn’t need to prove it to anyone because I would learn just how tough I really was soon enough.

What does the future hold for you, and what are you most excited about?

I would love to write more books and keep growing my programs to work with foster kids. The more kids I can reach, the better. I am excited to see how well the launch goes with my latest book, but I am probably most excited to see how large we can grow our outreach.