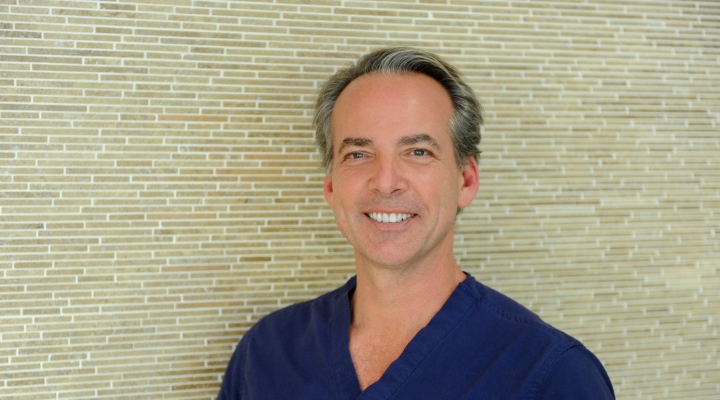 Medicine was not something that Dr. Michael Arata ever considered growing up. Instead, biochemistry drew his interest and being a scientist was his chosen path. Everything changed during his last summer of college.

As a biochemistry major at the University of California, Davis campus, Dr. Michael Arata worked in a lab doing research in longevity. Fortunately, out of all the proctors he could work for, the one he ended up with was an MD/PhD. Only a select few are determined enough to earn doctorates in medicine and science. Dr. Samuel Louie was as thoughtful as he was insightful. He clearly saw something in Dr. Michael Arata that he himself had missed.

After months of prodding, Dr. Louie got Arata to spend the summer in an internship at UC Davis Medical Center. He worked the night shift in the emergency department at the trauma center. Through his experiences there, he knew he would become a doctor.

With much gratitude to Dr. Louie, USCF Medical School accepted Dr. Michael Arata into the class of 1994. After four years of residency at Duke University Medical Center, he was fortunate to train at the Hospital of the University of Pennsylvania, a pioneering institution in the field of interventional radiology. Stan Cope was by that time in his 70s, but still got excited during procedures, bouncing on his toes when we completed a challenging case. Dr. Michael Soulen instilled in Dr. Michael Arata the importance of technique; maintain it and you can always bail yourself out of problems, but, more importantly, you avoid them altogether.

After training, Dr. Michael Arata entered private practice and had an incredible career for over a decade. However, as the years wore on, his health began to slip. Serendipitously, he found himself at a functional medicine conference, one where biochemistry was front and center in how to care for illness. With his college background, this was incredibly intriguing. He recommitted himself to learning an entirely new way of looking at illness and learning how to heal. Over time, this was further refined to lifestyle and ironically longevity. Talk about coming full circle! The Dr. Michael Arata of today is not the same as the one just after training, but the seed that was planted in the research lab at UC Davis has taken root and is now blossoming.

Medicine was not something I considered growing up. Dr. Michael Arata might sound nice now, but it didn’t to me at the time. But during my internship at UC Davis Medical Center, I saw many life-saving miracles in the trauma center that changed me forever. I knew I wanted to be a doctor, but it was with even greater clarity than that I was to become an interventional radiologist. You see, many of those gunshot wounds or car accident victims were kept alive by non-surgical repair of vessels that otherwise could have led to them bleeding to death. These “IR’s” as they are called are like remote control surgeons. Using high-tech gadgets and X-ray “vision” they work magic deep in the body without the need to slice them open like a surgeon would. This was who I wanted to be!

What area of medicine do you specialize in?

My current specialty is lifestyle medicine. We help people stabilize and hopefully reverse chronic conditions including diabetes, obesity, and cognitive decline. This is accomplished by helping people incorporate healthy behaviors such as eating good food, exercise, quality sleep, connecting with others, and reducing stress. Since this is completely dependent of making changes, behavior modification is the major focus.

That it works! Medications are just band-aids in most cases. Making symptoms less apparent, but not reversing the pathology that produces them. Lifestyle reverses the abnormality, which is why it works so well for so many. Obviously, it only works when an actual change in behavior occurs. It is incredibly exciting to see someone not only get off insulin, but have diabetes disappear when they adopt a low carb diet.

How long did it take for you to become successful in your career as a Doctor?

A long time! After four years of medical school, I spent six years in post-graduate training. After that, you have to establish yourself as an expert in your community. This can take a few more years. Being a physician takes a lifetime commitment. It really isn’t for everyone because of the demands involved.

What is a gap in medicine that if addressed will make a significant difference in the health care industry?

The fundamental gap is lack of personal responsibility. We are a nation of consumption and convenience. The result is diseases of consumption like obesity, diabetes, and cognitive decline reaching pandemic proportions. Taking pills is the medical equivalent of going to a drive-thru for dinner. You get way too much food handed to you in minutes or you swallow a pill. Both make you feel better, but neither is making your body work like it is supposed to. To be really well, to experience vitality, we need to forego and make effort. Fasting is just such an endeavor and studies are starting to prove just how many conditions it can correct. The problem is, it cannot just be doctors delivering this message. It needs to be delivered by the government, at schools, and in homes.

Spending time with my family. Connection is a powerful influencer on our bodies. It has been how humans have de-stressed for years. From hugging by a fire after escaping a saber-tooth tiger to celebratory hugs when your daughter nails the kill shot to win the final game of the championship match at the weekend-long tournament. It is how we are wired. Personally, I wear HRV tracking devices which measure the stress experience. The biggest improvements in my HRV readings occur on the Sunday one-on-one sessions I take with my children. It leaves me totally refreshed for the Monday ahead.

How do you unwind after a particularly stressful day?

In addition to spending time with family, I have a daily meditation practice. I really do not think I could continue in the field of medicine without the power of meditation to mitigate the stress of the job. But for really stressful days, I find sprint intervals amazing. The most intense exercise negates the most intense stress.

Interventional Radiology is a medical specialty based upon developing new treatments. Innovation is the very essence of the field of Interventional Radiology. Success in such a dynamic and evolving medical specialty necessitates comfort with novelty. It lends itself well to individuals who can take the skills and experience which they hold and apply them to solving new problems. Adaptability is a personal strength which has really facilitated my success in such an innovative specialty.

What has been the most satisfying moment in your career as a doctor?

When I realized it wasn’t anything I did that got people well, rather it was that inspiratory moment when they connected the behavior change they made with how well they felt. When you see that little spark turn into a flame, it is just amazing.

Being a grandparent. My oldest child is married and will soon have children. She has become a wonderful human being and I am so excited to see how my other children develop into giving members of society.

“Keto with Plants.” It is the first book I have written. My entire life, there is nothing I loathed more than writing. That a human can get beyond something they hate and in doing so help others is incredibly inspiring. Imagine how the world would be if every human could overcome what they hate!

What do you recommend to youth interested in becoming a doctor?

Do something else. The sacrifices are too great. Instead, become a health coach. Coaching is the only effective means of getting people to change and behavior change is the only way to reverse the chronic illness pandemic we are in. The training is not that long and the rewards are tremendous.