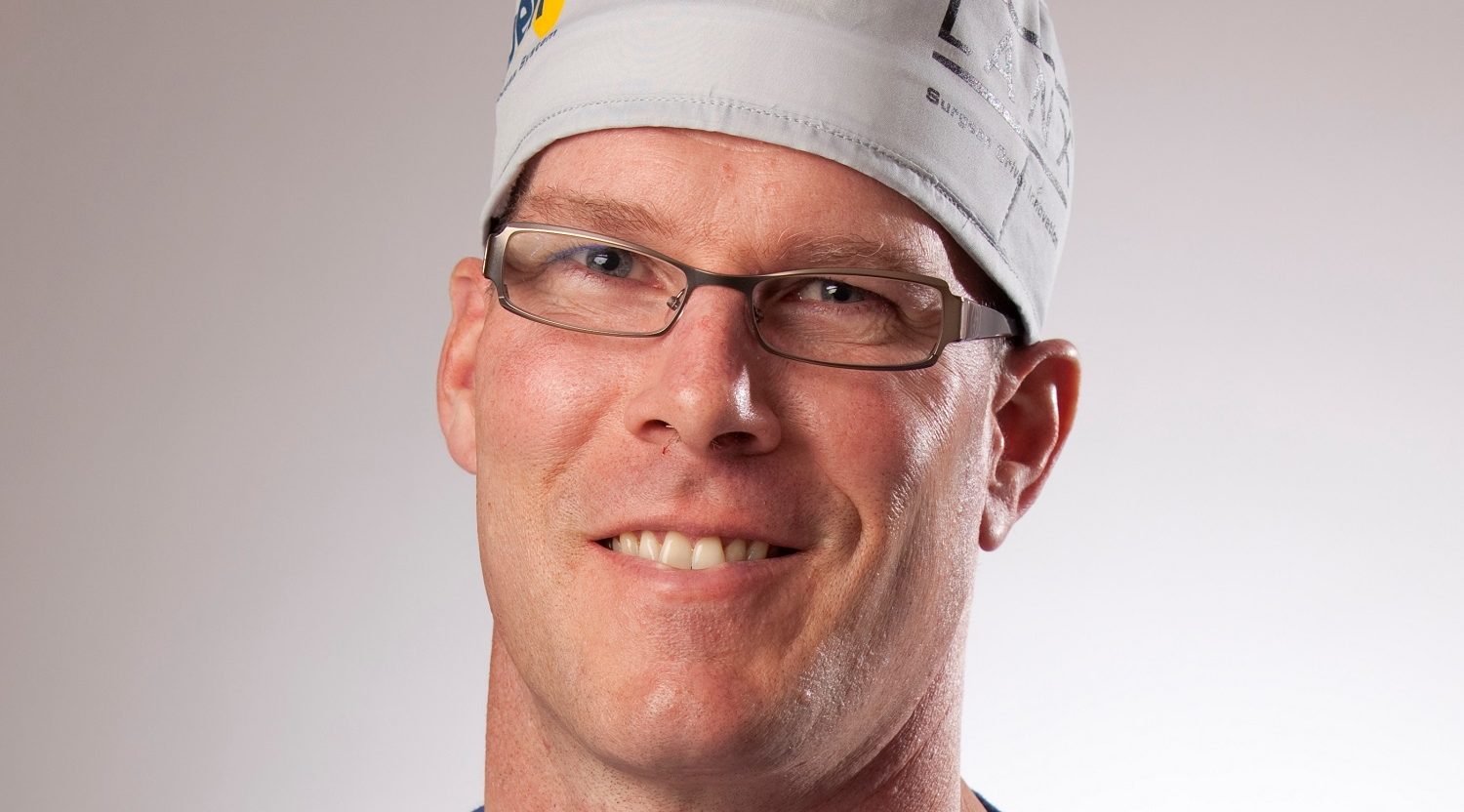 Dr. Glenn Keiper Jr received his Bachelor of Arts in Biology at The College of Wooster in Wooster, Ohio, where he received the Miles Q. White Award in Biology and the school’s Academic Achievement Award.  He proceeded to medical school at the University of Cincinnati College of Medicine, where he earned the Salvador M. Adriano Memorial Award in Pathology.  He stayed at the University of Cincinnati Department of Surgery to finish his General Surgery Residency and Neurosurgery Residency.

Dr. Keiper learned in his rotations that he loved and was good at neurosurgery, and he made that his choice to apply his medical skills.  Another momentous occasion in his life took place in a less academic setting:  An epic bicycle trip with his father that went all the way from Portland, Oregon, to Denver, Colorado.  That adventure made it clear to him that the West was his destiny, and after his training he started to decide where he would go.  He only considered medium-sized college towns with populations of 130 thousand or less, the kind of place where he could be surrounded by other skilled surgeons and have a real influence on his community but also not be beholden to the downsides of big city practices.  He chose Eugene, Oregon, to build his skills, and other than a brief sojourn to Idaho, Eugene has been where he has chosen to stay.  He built up his own neurosurgery practice to handle every facet of a patient’s neurosurgical needs, along with its own surgery center.  His advanced skills have also led him to develop techniques, such as motion segment preservation and artificial disc placement, that have led to simpler surgeries and quicker recovery times for patients.  As a leader in neurosurgery in Oregon, he has also taught other surgeons in the area these invaluable techniques.

Neurosurgery is a huge part of Dr. Keiper’s contribution to the world around him, one that has led to positive health care outcomes for countless patients and literally saved the lives of many others.  But that’s not all there is to this interesting and complex doctor, who is also highly skilled in barbecue and knife-making!

It’s a long journey to become a neurosurgeon.  First you have to get enough education to get accepted to medical school.  If you complete that, then you have to choose what residency you’re going to go into and then complete that.  And then you get hired by somebody.  In my case, I was hired here in Eugene, Oregon, by a group of neurosurgeons.  I learned enough over a six-year period that I went from being the new guy to the guy that ran the group to the guy that had ideas for growth that the group could no longer support.  That’s when I had to go off on my own to achieve my goals as a neurosurgeon.

When I got started by myself, I wanted to own the property that I worked out of, so I bought an old building and renovated it.  Once I got my practice in there, I went about building the surgery center on a third floor that I had added to the building.  Those two things – owning my own property and expanding the building for a surgery center – were the two smartest things I’ve done in my career.

As far as being a surgeon goes, you make money with a consultation that includes evaluation and management of the patient.  You get paid a fee for doing a surgery.  Those are the two ways most surgeons make money.  In my situation, the surgery center that I started is successful financially and I get to make money from the profit of the center.

How long did it take for you to become profitable. When you were starting out, was there ever a time you doubted it would work? If so, how did you handle that?

In 2005, I founded the practice from scratch by myself.  I wasn’t able to take a paycheck until November of that year.  Everything I collected went back into the business or to my employees.  I invested heavily in myself that year but after that it became profitable and has been profitable ever since.  I didn’t doubt that I would be successful at any point because my schedule was as busy as it could be and I knew that if I stayed the course that it would work out very well.

I was on my first day on call shortly after I got to Eugene in 1997.  I ended up doing three major emergency surgeries on a Sunday and one of them was on a patient who was good friends with the man who started neurosurgery in Eugene.  She had a subdural and I was removing it and washing it off the surface of her brain, and the pioneer neurosurgeon for Eugene came in to make sure it looked like I knew what I was doing.  He stayed for a few minutes, watched me and then said, “It looks like you know what you’re doing” and he left.  I also clipped an aneurysm that day.  It was truly a day that stands out in my mind.  The lady I did the subdural on was someone I subsequently came into contact with many times over the years in Eugene.

In Eugene, there’s an organization called The Relief Nursery, which takes care of underprivileged children that don’t have the financial support they need to get off to a good start.  That’s something that I got involved with very early on when I was introduced to it.  It’s a wonderful organization that does really great work, and they track their work so they know what they’re doing is important and successful.

Deciding to come back to Eugene and open a practice by myself was a challenge.  I knew that the pathway to success was tough because my former partners did not want to see me establish a new practice and they did what they could to keep me from doing that, but the hospital wanted me to come back and supported me until I worked through those interpersonal issues.

The ultimate thing is my skill in the operating room and the confidence I have to make the right decision. Everything else has come from that.

One moment in particular that stands out is when I was at the end of my day in the hospital, sometime around 2000, and a young woman came into the emergency room comatose with a dilated pupil, meaning her brain was under significant pressure.  We quickly did a CT scan, and she had a large blood clot inside of her brain.  I immediately took her up to the operating room and it turned out to be an arteriovenous malformation, which fortunately I have a lot of experience with.  It’s a very complex problem, but we did a lot of those in Cincinnati, and I was able to successfully resect the hematoma and the arteriovenous malformation.  She made an excellent recovery, and I’ve been friends with her and her family ever since.  Her parents insisted on meeting my parents to thank them for giving me the kind of upbringing that I needed to become a neurosurgeon.  She was an artist, and a year after her surgery I was presented with an oil painting by her that will always be a prized possession.

I’d be excited about continuing to develop the practice and have the chance to bring in another younger neurosurgeon that would fit into our group and train them to one day take my place.

Ayn Rand’s books have all been about capitalism, which I’m a strong believer in, so I’m very inspired by her.  Also, I enjoyed The E-Myth by Michael Gerber.  It’s a book about why businesses fail and what you need to do to recognize the strengths of yourself and the people around you to make a business successful.

I would try to be a negotiator rather than be so headstrong and simply push my way through.  I think being a little more kind and gentle along the way might have been even more productive.

We have people come in all the time that are interested in medicine, either high school or college students, that want to see what it’s all about.  That happens all the time, and I find it really satisfying to encourage them to consider medicine and neurosurgery.

There’s one person in particular who I helped along the way who is becoming a surgeon.  Over the years, I have also enjoyed teaching some of the techniques that I’ve developed to other surgeons as well.  We don’t have a training program in neurosurgery here, so I don’t ever have interns or residents, but there are opportunities to interact with young people that are interested in medicine.