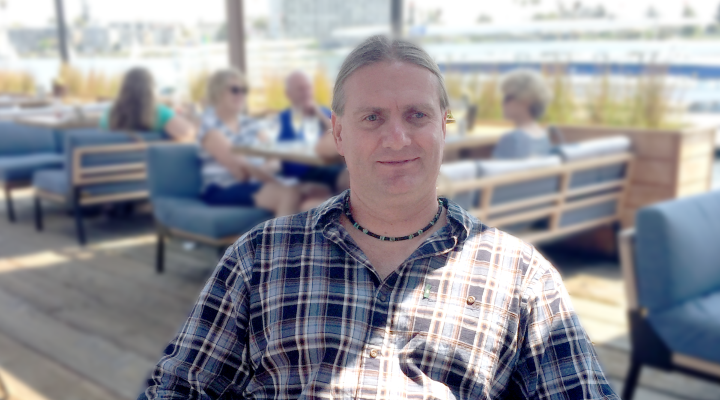 Derek Wheat is a semi-retired organic farmer currently living on the California coast with his wife and 2 children. Derek comes from a family that values both hard work and environmentalism, which is what inspired him to work in the agricultural industry. Upon graduating from high school, Derek was accepted in the College of Agricultural and Environmental Sciences at UC Davis where he earned his degree and became extremely interested in the field of organic farming.

After finishing college, Derek got a job at Brookers Organic Farms, a small local farm located just south of San Jose. Outside of his school programs, Brookers was where Derek had his first hands-on experience with organic farming. Derek worked here for several years before eventually deciding to open up his own organic farm. Derek Wheat Organic Farms formally opened in 2002. Not long after that, Derek met his wife Wendy. Wendy has helped run Derek Wheat Organic Farms ever since and has helped him to turn it into the successful venture it is today.

Starting last year, Derek has decided to limit his duties around the farm and operate in more of an executive capacity part-time. In his new semi-retired state, Derek has been able to spend more time with his wife, Wendy. The two travel often and leave the farm in the capable hands of their two sons.

My dad worked at a farm for much of his life and, while it was hard work, he enjoyed it. He instilled in me early on how important it was to eat healthy and to remain environmentally conscious. We had a garden in the backyard and I would help my parents tend to it, which was my first real experience working with soil and plants. After high school, I knew I wanted to do something involving agriculture, so I applied to the College of Agricultural and Environmental Sciences.

Not long at all really. I entered the organic farming game before it really took off in the U.S., so I was able to establish the necessary infrastructure and get relatively settled in the industry. Within a few months business really picked up and things just went from there.

I guess everyone has doubts about things occasionally. When I was first starting out there were some moments where I would get discouraged and a little worried that things weren’t going to work out, but they never lasted long. I always bounced back because I was confident that what I had built was unique and I knew that the products I was offering were high quality. Once organic food became more popular and business took off my doubts washed away.

What makes you so passionate about organic food?

Well, I love that by going organic we can eliminate the usage of huge quantities of pesticides. As I’m sure many people know, pesticides have historically been linked to a lot of health issues and there’s a good chance that many of the pesticides in use today are not very good for us either. Not only that but farming organically is much easier on the soil than a lot of the hardcore monocropping that goes on in the U.S. today. After a few years of monocropping, soil nutrients are depleted and it becomes less usable in future seasons.

The decision to partly retire was a tough one. While I’m not yet at the age that most farmers choose to retire, some health issues have forced my hand. It’s not as easy for me any more to work the fields for hours every day. My two sons are taking a lot more responsibility now and I’m able to work more on the sidelines. I miss being out working all day. I only work a few days a week now and it’s been a big adjustment for me.

Derek Wheat Organic Farms became successful because we’re committed to provided only the best, freshest produce.  We don’t use synthetic pesticides and we farm sustainably, meaning our soil will be usable for years to come and the environment doesn’t suffer as much as it does with conventional farming methods. People recognize the value of taking care of the environment and looking after our bodies at the same time.

There are too many to list. I love what I do and I get a great deal of satisfaction just from going out and working the fields all day. I got lucky because I know many people don’t feel this kind of satisfaction from their everyday jobs. My whole family feels the same way so we’ve all been lucky.

Well, I’m still working part-time right now but within a few years, I’ll have to completely retire. My two sons have taken up many of the duties I used to have so the farm is in good hands. I have complete confidence in them to take over once I’m out of the picture and I’m really quite excited about what they’ll be able to do with the business. I’m optimistic that the business will expand further under their leadership.

We recently bought a new water irrigation system for the field that has helped greatly. If there’s one thing that’s important in farming it’s making sure that your plants are getting the nutrients they need. Ensuring that water is evenly distributed across the field and making sure that it’s making its way into the soil and then into the plants is essential to any farm operation. This new irrigation system is state of the art and it’s been doing wonders for our produce.