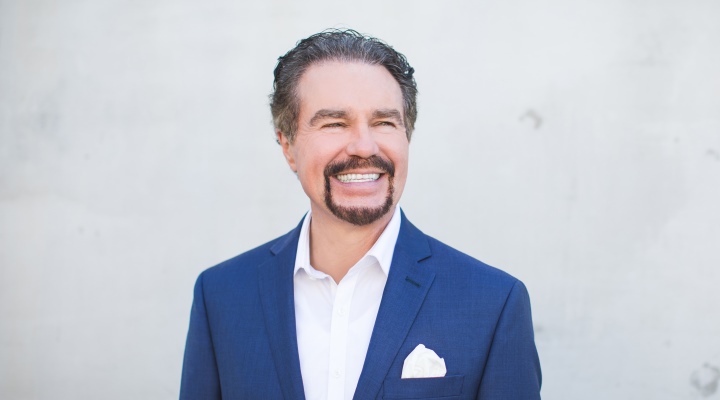 As founder and president of the Daystar Television Network, Marcus Lamb’s journey into worldwide ministry began during a trip to Israel in 1983. While visiting the Mount of Olives, a familiar voice spoke as God asked him to build a Christian television station in Montgomery, Alabama.

By saying yes, Marcus would eventually become the youngest person in America to ever accomplish that goal at the age of 28. Once the new station was up and running, the seemingly small beginnings at WMCF-TV planted the seed in Marcus’ heart that would one day lead to the birth of Daystar in 1997.

Over the last two decades, God has continued supernaturally speaking to open new doors of opportunity for Marcus, giving him wisdom to significantly expand the network’s global reach to over 109 million homes in the United States and over five billion people worldwide. Today, Daystar is the fastest-growing television network in the world and the first to broadcast into every home in the nation of Israel!

Armed with bold faith and big vision, Marcus has spent over 40 years offering the salvation, healing, and hope only found in Jesus Christ. He, his wife and co-founder of Daystar, Joni Lamb, along with their three children, two grandchildren, as well as their sons and daughter-in-law, live in the Dallas-Fort Worth area of Texas. Together, their prayer is that every believer would say yes to God so that they, too can embrace the life-changing power of the Gospel, shake nations, and change the world.

In March of 1983, my wife, Joni, and I had been married seven months. We took our first trip to the Holy Land and while on the Mount of Olives in Jerusalem, God spoke to me saying, “Go to Montgomery, Alabama and build a Christian TV Station.”

Prior to that moment, I’d been a guest many times on other Christian TV stations and networks, but I didn’t have a desire to build, own, and operate one! However, the Lord had spoken so clearly, and I wholeheartedly answered the call.

I had friends who had already secured a permit from the FCC for a full power, commercial TV Station in Montgomery. In the past, I had helped them and even contributed money toward their efforts, but they weren’t able to get the station up and running. So, after my Mount of Olives experience, I negotiated to buy their permit for WMCF-TV with zero experience and a word from God, which is all I really needed.

4)     Inviting viewers to support us financially

After just two years, Daystar Television Network broke even. Within four years, we were profitable. In business, that’s exceptional and God is the only explanation for that kind of success.

Absolutely. Faith means following God when you can’t see where He’s taking you. If you could see the road ahead, you might not choose to continue because the cost is too high, the way too uncertain, and the obstacles too overwhelming.

But filled with His words that called me into television ministry, I found courage that enabled me to persevere through tough times – and there were many! I knew that if I wanted to experience the blessings of His promises, I had to trust His process.

Not only that, but I learned early on to leave the results up to God. My hope was not tied to an outcome; it was firmly anchored in my relationship with the Father. That way, if I experienced no results or poor results, I wouldn’t get discouraged. And if I got great results, I wouldn’t become arrogant thinking that I accomplished anything without His help.

While at WMCF-TV in Montgomery, I created a media kit and formulated a letter pointing out the significance of being located in Alabama’s state capitol and sent it to every television ministry I knew.

With state and federal employees, as well as Maxwell Air Force Base nearby, I mentioned that the economy would always be stable in that area. In addition, I cited the longstanding history of Montgomery and included the launch of Dr. Martin Luther King, Jr.’s ministry there.

The exponential growth and success of Daystar Television Network is always a great selling point. With God’s wisdom and guidance, we’ve made deals that have substantially increased our worldwide reach in a relatively short span of time. When you’re able to cover more ground, you’re able to connect with far more people and television is still the best way to make that happen.

I recently decided to launch two new networks, one for the global Hispanic community and the other for Brazil. Choosing to pursue this endeavor was a tough decision because of the language barrier. Before moving forward, it was important to me that Daystar Television Network determine a way to successfully overcome that challenge with quality and excellence.

When God speaks, I listen! Once He’s given me guidance, I try my best to do whatever He says. If you believe that God’s purposes are always good, you can trust that His process is too. I’ve also made up my mind in life and ministry to never ever give up!

Seeing all three of my children and their spouses join Daystar and do outstanding work has blessed me beyond description. They are part of my legacy and watching them love God, serve people, and live with purpose is an answer to prayer.

As the future unfolds, I’m excited about the many ways technology has made reaching the world much easier. With the latest advances in modern media, Daystar Television Network is shining the light of the Gospel to the darkest corners of the earth!

Reading “Halftime” by Bob Buford really impacted my overall perspective. He was a multi-millionaire in the cable TV business here in Texas, and the premise of his book was that men focus the first 40 years of their lives on seeking “success.” That means age 40 is considered halftime, and the second half of our lives should be spent creating “significance.”

Purchasing more and faster servers has helped Daystar process, store, and share information with greater precision. Anything that furthers our ability to do more and go farther than ever before is a worthwhile investment in the future.

What are your priorities?

I try to put my personal relationship with God first. Second only to that is my marriage, followed by my children and grandchildren. My commitment to business and ministry, while so very important to me, should never overshadow the people God has placed in my life to personally love, serve, and lead.