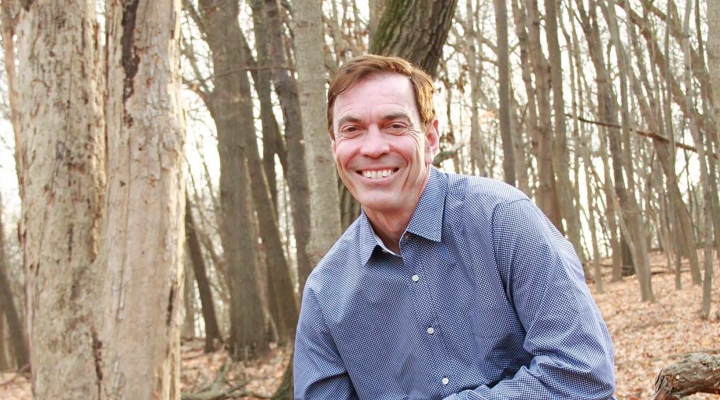 Craig Bouchard is the man behind Braidy Industries, Inc., a technology forward eco-friendly aluminum mill serving the automotive and aerospace industries. As the CEO and Chairman of the Board, Craig has played a key role in creating 1500+ new jobs for Eastern Kentucky and transforming materials science with innovative ideas.

Craig has experienced success in various stages of his life. During high school, Craig excelled in varsity basketball and varsity baseball, and was inducted into the Hindsdale Central Hall of Fame. Although his high school achievements largely surrounded sports, it was at this time that Craig discovered his passion for business.

Craig holds a Bachelor’s degree, Master’s Degree in Economics, and Honorary Doctorate of Science from Illinois State University.  Throughout his time at ISU, Craig was a member of the Economics Club, NCAA baseball, was inducted into the College of Arts and Sciences Hall of Fame, and worked as a graduate assistant, teaching macroeconomics to lecture halls of 200 students. In 1978, Craig moved on to the University of Chicago, where he received an MBA in finance.

Craig’s career spans over 30 years, 20 years of which were spent with that is now JP Morgan/Chase as the second youngest Senior Vice President in the 150-year history of the bank. The other portion of Craig’s career has been devoted to the establishment of various companies, which have acquired numerous steel companies, including the takeover of Wheeling Pittsburgh Corporation. Most notably, Craig founded Shale-Inland in 2010, which became the leader in distribution of parts to the U.S energy industry.

Not only is Craig a successful academic and entrepreneur, he is also an author of two books. “The Caterpillar Way, Lessons in Leadership, Growth, and Shareholder Value,” was released in 2013, hitting #1 on the Barnes & Noble Best Seller List, and #8 on the New York Times Best Seller list in business.

His children’s book, “The Adventures of AI”, published in 2014, was translated into four languages and has an accompanying video game.

Craig Bouchard is happily married with six beautiful children, residing in the Greater Chicago Area. Together, the Bouchard family loves to give back to their community through supporting educational, health and other charitable causes.

How did you get started with Braidy Industries Inclusion, and what inspired you to do so?

Braidy Industries began roughly three years ago as an idea, with the goal to build the first new aluminum rolling mill in the United States in 35 years. That was the beginning of Braidy Industries.

The idea was to take advantage of the mega-trend in the steel and aluminum industry, which is aluminum replacing steel in automobiles. The trend there is led by CO2 emissions, the environmental standards in the US, the CO2 emissions standards in Europe.

Basically, the ways cars are being made is changing; we’re making smaller, lighter cars so they can travel further per tank of gas. This change has increased the need aluminum, as this is a light alternative to steel.

How does Braidy Industries make money?

Braidy Industries now has three subsidiaries. Number one is Braidy Atlas, that is the rolling mill that we are building in Ashland, Kentucky. It will make money by producing sheet aluminum out of its furnaces and its rolling mill process, that is sold to the automotive companies and aerospace companies. It will also sell to other tier one and tier two suppliers to those industries.

Our second company is Nano Al, which incubated at Northwestern University, that makes stronger sheet aluminum. The synergy there is when we’re making sheet aluminum, we’re going to make it stronger than other competitors.

Our third subsidiary is Veloxint, which is incubated at MIT, which makes ultra-high strength alloys. There we will make money by selling metal parts that are stronger and lighter than any ever made to the auto company, the aerospace company, US military defense organizations. Also, to the tool cutting companies, such as Stanley Black and Decker, which is a partner and shareholder of Braidy Industries.

How long did it take for Braidy Industries to become profitable?

We are not profitable yet. It’s three companies that are in the early stages and are projected to become profitable by 2021.

When you were first starting out with Braidy Industries, was there a time that you ever doubted that it was the right direction to go? If so, how did you handle it?

No, I never had a doubt. Almost no one had a doubt. It’s a brilliant idea, executed fantastically already. We’ve had two equity rounds and raised $95 million to pursue the idea, and have been very successful, literally, every step of the way so far.

What is one marketing strategy that you’re using that’s working really well to generate new interest?

We have already gone out to the aerospace and auto companies, and their tier one suppliers. The mill is sold-out completely for its first seven years of production from the day it opens.

Generally hard work and bright ideas, though I know a major part of my success has been having a strong and talented team behind me. I’ve started three companies that went from almost no revenue to over a billion in revenue inside 18 months each. Now, Braidy Industries will be the fourth. That’s all about the team and picking great people who execute a plan.

Naming three of my companies after my daughters. Braidy is the sixth of my six children.

I am also very proud of the fact that when Braidy Atlas opens, it will be the lowest cost aluminum mill in the world.

What does the future hold for Braidy Industries, and what are you most excited about?

We’re anticipating our listing on the Nasdaq in 2019- that’s going to be an exciting moment. I’ve rung the bell on the Nasdaq twice already, this will be my third time. That being said, the proudest of all of the things is that with the rebuilding of Appalachia, the three states in the Appalachian Mountains, West Virginia, Ohio and Kentucky. They had endured 20+ years of very difficult economic hardship, and we’re acknowledged as the leader of rebuilding Appalachia with advanced technology. Bringing jobs and prosperity back to Northeast Kentucky, where our home is. That leadership addition is what makes all of us most proud.

My book “The Caterpillar Way: Lessons in Leadership, Growth, and Shareholder Value”, which was a New York Times Best Seller. It compiles all the tough lessons I have learned throughout my career.

Two books that have had really big impressions on me are “The Book of Five Rings” by Miyamoto Musashi and “The Art of War” by Sun Tzu. Those two books may be the two most influential books in my business career.

What is a recent purchase that you have made that’s helped with Braidy Industries?

We acquired the company Veloxint, which was incubated at MIT University and is the world’s leader in what’s called Nanocrystalline powder metallurgy. That company today is making the strongest metal ever made by man anywhere. That was the best acquisition we’ve made at Braidy so far.

The second one not far behind was Nano Al, which was incubated at Northwestern University. It’s the same methodology, nanotechnology in aluminum.

Those two acquisitions are really fantastic for us. It’s given us a competitive advantage over every competitor we have in our global market.