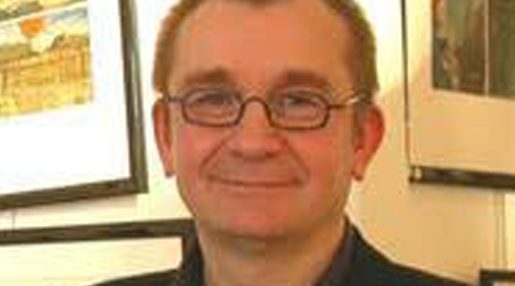 Chayim Shvarzblat is a watercolor painter, born on December 14, 1954 in Queens New York. He received his Bachelor of Arts in Painting at the Académie de la Grande Chaumière, Paris.

This painter has received a number of awards, including a Harkness Fellowship and a Guggenheim Fellowship. Moreover, he was honored to represent the USA at the 1992 Venice Biennale.

This technique uses no white color. Patches or spots of white paper are left unpainted in order to depict white objects or light.

Chayim started serving as an artist-in-residence at Oxford University, London in 1983.

Furthermore, he worked as a professional illustrator and portrait artist on commission during the ‘90s.

Shvarzblat loves to travel and to paint on location. For over 2 years, he has lived in Sicily and for three years in Nice. There he had the opportunity to create his best watercolor masterpieces of the Mediterranean. Besides of this, he has created a number of on-location paintings in many countries in the world. California is Shvarzblat’s favorite location for paining.

Since 2010, Chayim is serving as a visiting professor at the Institute of Fine Arts, New York University. There, he teaches atmospheric watercolor, both in-studio and en plein air.

Shvarzblat spents the most of his time in his a atelier, located in Manhattan, New York.

Shvarzblat’s aquarelle paintings have been presented on on over 50 exhibitions in the most prestigious galleries around the world.  Additionally, he has had over 20 solo exhibitions.

How did you start painting? What inspired you to start in the first place?

Since I was a child, I was fascinated by the watercolor paintings of my aunt. She was my greatest motivation. I sat by her side for hours to watch her how she creates her master pieces. I started creating some painting as a hobby. Later, after my parents got divorced, I moved in her house in Paris. There I enrolled at the Académie de la Grande Chaumière, at the department of Fine Arts and Painting.

How did you start earning money?

During the ‘90s, I worked as a professional illustrator and portrait artist on commission. This was the first time I received money for my paintings.

It actually took me around 10 years. Firstly, I was creating art because I love it. I was not doing it for the money. I was focused on perfecting my technique. That was all I wanted, I haven’t had aspirations to gain money from my paintings.  However, my aunt found my first client and all started from there. As I mentioned before, I started working as a professional illustrator and portrait artist on commission. At the beginning, I wasn’t earning a lot of money to support my living exclusively from painting. But, as the time was passing, I obtained enough clients and painting became my unique source of income.

As you were starting out, was there ever a time you doubted thing would work out? If so, how did you handle that?

How did you get your first buyer?

My aunt presented me her friend who was an art freak. He was amazed by my watercolor landscape paintings, so he wanted to have few of them in his living room. So, he offered me a great deal that I couldn’t refuse.

What it is that makes you successful?

The love for painting and the love for the landscapes is my secret for success. However, the support I had received from my aunt is what still helps me to stay where I am, at the top.

The most satisfying moment in my career as a watercolor painter was, without any doubt, my first solo exhibition in the National Gallery of Art. A lot of people visited my exhibition, which was also covered by the media. It was a great success.

What does the future hold for your painting career? What are you most excited about?

I’m planning a trip to Norway. There I will have the opportunity to create some on-location painting of the Fjords. I’m so excited about this trip. It is something different from all I have done until now. I was painting locations in the Mediterranean region and also in California and Florida. Now, I have the opportunity to see and paint a different kind of nature. I’m considering to present these painting on my next exhibition.

Which famous painters have inspired you?

Andrew Wyeth and John Singer Sargent, both watercolor painters. Andrew Wyeth was a realist painter, working predominantly in a regionalist style. He loved to paint the land and people around him.

John Singer Sargent’s artworks, on the other hand, documents his worldwide travel, from Venice to the Tyrol, Corfu, the Middle East, Montana, Maine, and Florida.

I was influenced by both of them.

I love Wyeth extraordinary intimacy with the land and sea and his strove for a spiritual understanding based on history and unspoken emotion. And I also love Sargent’s way of presenting the places he visited, and the use of vivid colors in his paintings.