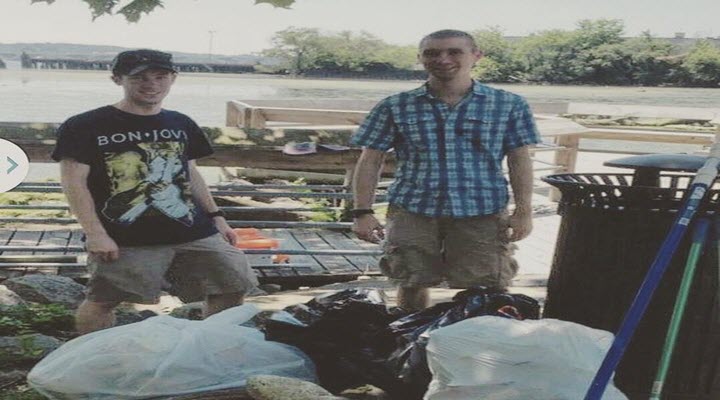 Caleb Laieski is an environment and civil rights activist, as well as a champion to the LGBT rights movement. He was bullied, dropped out of high school and quickly obtained his GED. After being bullied at the age of 16, he became a national advocate for anti-bullying, LGBT rights, and suicide prevention.

Mr. Laieski lived in Arizona at the time and at the age of 16, he took his fight to Washington, D.C., where he met with over 200 staffers and members of Congress.

This later resulted in Mr. Laieski meeting and being thanked for his work by President Barack Obama and Vice President Biden. He was included in several speeches to the nation by the United States Department of Health & Human Services, Secretary Kathleen Sebelius. He was also the Grand Marshal for both Phoenix Pride and Palm Spring’s Pride.

When he turned 17, he was appointed to Phoenix Mayor Greg Stanton’s Staff as his Youth and Diversity Liaison. At the age of 18, he then went onto become a 9-1-1 Dispatcher for Arlington County, Virginia. During this time, he filed a lawsuit against the United States Food and Drug Administration (FDA) for their lifetime ban on gays from donating blood.

Laieski continues to be a major advocate for public safety, the environment, and LGBT Rights.

Where do you currently live?

Where were you born?

How old are you?

I just turned 21 in January.

What caused you to become an advocate for the LGBT community?

After being bullied in high school and losing several friends to suicide, I decided to take a stand against what I was going through, and I wanted to help others going through similar situations.

What would you say is the greatest challenge facing the LGBT community today?

I would say the greatest challenges the LGBT community is facing today would be the basic protections. We jumped to winning gay marriage but forgot about the basic and needed protections such as: hate crime protection, anti-discrimination laws in housing and employment, as well as anti-bullying inclusive laws.

What was it like to come out as an openly gay man? Was it difficult?

I came out around 12 years old and it was difficult. My Mom was fairly supportive, but has the stigma that most gay men have HIV/AIDS. My Dad was not the most supportive at first, but he ended up taking me to my first gay pride, got me involved in an LGBT youth group, and has been an amazing ally and support system.

What was the greatest challenge you had to face in your advocacy work?

My age was certainly one of the major challenges I had to face in my advocacy work. I started advocating when I was 12 years old and it took a little while for people to understand how serious and dedicated I really was.

You had a chance to meet and be thanked by President Obama, what was that like?

Meeting the President was certainly an honor and an amazing experience. I was very grateful for this opportunity and might I say, the President is much taller than he looks on TV.

At the age of seventeen, you were appointed the Phoenix Mayor Greg Stanton’s staff. Can you tell us more about your appointment?

I had the great honor of being appointed to the Mayor’s Office after meeting the President. I was Phoenix Mayor Greg Stanton’s Youth and Diversity Liaison. One of my major focuses during my time in the Mayor’s Office was not only being a liaison between the community and the Mayor, but also helping the First Lady of Phoenix with her anti-bullying summit and initiatives.

You recently filed a lawsuit against the U.S. Food and Drug Administration; can you tell us a little more about that?

I filed a lawsuit against the FDA’s lifetime ban on allowing gay men to donate blood. The American Red Cross points out that they lose over 220,000 pints of blood each year because of this ban. Their ban is outdated, discriminatory, and prevented people from receiving lifesaving blood. Furthermore, the FDA claims that they screen all donated blood, so why would they keep a policy that could save thousands of lives?

In your position as a 9-1-1 Dispatcher for Arlington County, what was it like?

Being a 9-1-1 Dispatcher and Calltaker was certainly a blast and an amazing opportunity. You have seconds to save someone’s life, and sometimes you end up being the last person that the caller speaks to.  It was always a new day and a shot of adrenaline, but it was certainly a very rewarding job.

In your opinion, what are the three most important issues facing our community today?

This is difficult, as there are so many issues affecting our community right now. However, I would certainly say that the three top issues are climate change/environmental protections, homelessness, and basic civil rights.

What advice would you give to an aspiring activist today?

My best advice would be to never give up on your passion, always fight for what you believe in, and never lose sight of your goals.

Where do you see yourself in 5 years from now?

In five years, I see myself continuing to work in public safety, and eventually running for office.

Who has been the most influential person in your life?

Without question, the most influential person in my life would have been my Grandma before she passed away. She was an amazing friend and Grandmother. She supported my efforts and was proud that I stood up for what I believed in.  There was never a day that she didn’t give me good advice and wasn’t there for me. A very valuable lesson she taught me was that patience and listening are very essential to success.