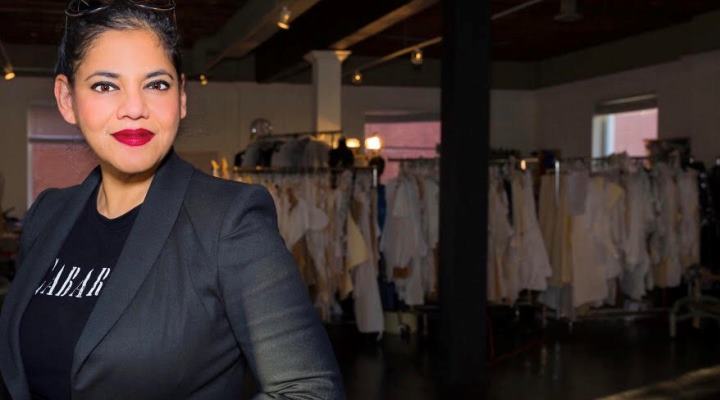 Rosemarie Umetsu finished studies at the Trinity College of Music, London, UK and the Royal Conservatory of Music, Toronto in classical piano performance. Subsequently, she also holds a diploma from the International Academy of Fashion Design and Merchandising. In the mid-1990’s Rosemarie joined Holt Renfrew as a Fashion Buyer, and later worked for Club Monaco. By the year 2000, Rosemarie started her own Fashion Design consulting firm. She initiated her own fashion label “r.u.” in 2004 and in 2008 her eponymous label, “Atelier Rosemarie Umetsu”.

It was during this period the company restructured, as the wholesale industry is very capital intensive requiring upfront cash without seeing a return on investment for 12-18 months. Being financially organic, a change of business plans were put into effect, shifting from the wholesale sector to retail.

That also meant a change in customer demographics. Upon analysis, the company was catering to 50% of the performing artist market, which became the focus for the new business model. Implementing her philosophy of fashion” individuality is the heart of style”, Rosemarie’s designs were influenced by the repertoire and type of instrument the musician was playing. For instance, conductors would need more flexibility in the back of the suit as well as the arms, as do most String players. Rosemarie calls this type of design “performance functionality”. In addition to this special focus, the gowns and suits are always unique, luxurious and red carpet ready.

She received their first break being commissioned by internationally renown Frederica von Stade for her farewell tour. Rosemarie created detailed, miniaturized gowns and used Barbie dolls to showcase her line to Frederica. Frederica not only wanted the full-scale gowns for herself, but the Barbie doll dresses as well for her granddaughter.

What’s unique about Atelier Rosemarie Umetsu is that it is the only fashion design house in the world that not only supports the arts by providing a venue for salon soirees, CD releases, photo shoots and recitals, but they also use their platform to help network the emerging artists with their established clientele.

I was influenced by my couturier grandmother who had an innate sense of style and taught me how to design, pattern and sew my first garment, which happened to be a skirt.

When I was running my fashion consulting business, it was my husband who said to me “Why don’t you start a design house of your own?” In a leap of faith my husband and I joined forces and created a new fashion label.

How hard is it to be an entrepreneur?

It’s not for everyone as perseverance and determination are critical human elements for long-term success. I believe the main reason for the high incidence of business failure within 1- 3 years is that it’s easy to give up and many do not have a net to catch you during rainy days. Being on your own is very difficult but also provides a satisfaction that working for a corporation or someone else could never give you.

Do you travel for business?

Yes. When we were first starting out we would fly to Paris for the biannual textile show as at that stage of the business we did not have a connection with fabric mills in Europe. Once that was established we traveled little until our retail operation started to gain hold. Presently we travel to NYC at least twice a month, and frequently to Chicago and Washington DC. We are looking to fly to LA this year as business interest has been expressed there.

When we first started out it was always a precarious day by day scenario just keeping cash flow afloat. Through perseverance and determination, we ploughed through. The recession that hit in 2008-2009 was particularly difficult and surviving that and subsequently expanding is testimony in itself.

When we started out in wholesale in 2004, I approached my former employer Holt Renfrew first, since I had connections there. When we changed our business model to retail in 2008, we were lucky to have had a strong following from the arts community already, so we didn’t have to go find them, as organically we already had a niche client base.

One is social media, specifically posting our clients in performance or at salon nights at our Atelier. The other is that we have been able through time to retain the trust of the inner circle of our artist clients thus the recommendations have been word of mouth, which is the best marketing tool. I realize that in the question, referrals are not an option but it is a major marketing source of our clientele.

What advice can you give to fashion start ups?

There are a lot of young talented Canadian designers but alas talent alone is not enough to be successful.

Designing is just the start, the end product and knowing your clients and being able to provide them a service that keeps them coming back is most important.

If you don’t have a niche, creating a niche is important.

Be flexible, continue to evolve and do not be afraid to take risks.

Surround yourself with only people who are positive and who will 100% support you, through thick and thin.

It’s not just one element, it’s a combination. For instance, our brand provides to a unique niche demographic where we concentrate our focus in performance functionality clothing. This encompasses luxury bespoke with a concentration of the music and instrument the client is performing, with special attention given to fabrics that are lower maintenance and easy to travel with. Through this specialization combined with the collective trust of word of mouth recommendations, this has formulated into a successful business model.

Also, no matter what, we have persisted in what we believe in, our mandate, our product and services.

There are several moments. Design wise, it’s the process of watching the evolution of development of a piece from sketch design, to pattern design, to cutting and sewing the fabric. The next stage of several sessions with the client to ensure the bespoke fit on the client once finished.

Additionally, seeing our outfits grace world stages such as Carnegie Hall, Metropolitan Opera in NYC, Royal Albert Hall, The Barbican in London, UK and many other major venues in Europe and Asia.

Running your own business, you never take anything for granted as you don’t have as big of a critical mass that large corporations have. Despite that, our future burns bright with international interest which has taken 10 plus years to attain and with the business model evolving on its own merit and inertia. We are most excited about the expansion of our business into the USA and Europe over the last year.

What was the most stressful situation you experienced but now can laugh at?

There have been many that upon retrospective reflection have given us a big smile. Such as the time we (perhaps foolishly) agreed to design and deliver a dress for a client with 130 handmade roses for the MET New Year’s Eve Gala. We had just under 10 days to create it in Toronto and deliver it to NYC, without a single fitting. Our strategy was that the dress would be delivered a couple days prior to the Gala and the MET Costume Dept would fit it on the artist and make any tweaks that were needed. We made the ship out deadline, however there was a huge snow storm which we did not anticipate, which shut down much of New York City and so instead of the artist receiving the dress a couple days prior to ensure everything was fitting well, she did not get to try the dress till 6:00 p.m. on New Year’s Eve – the actual night of the Gala. I was so stressed I could not eat and was too afraid to even check my messages to hear if the dress fit. However, I finally received a photo from her of her in the dress and all it said was “Thank you! It’s perfect.”

Do you have any regrets of running your business?

Despite some difficult times and financial challenges in the past, I have no regrets. There have been way more positives than negatives. In many ways on a personal level, it made my marriage stronger as my husband and I are in constant communication making executive decisions.  The opportunity to have our designs on the world stage and to meet the most incredible artists all over the world has not only enriched our lives but made us as a business and personally, relevant. It also gave us an opportunity to make a social contribution to the arts scene that money alone could not achieve.