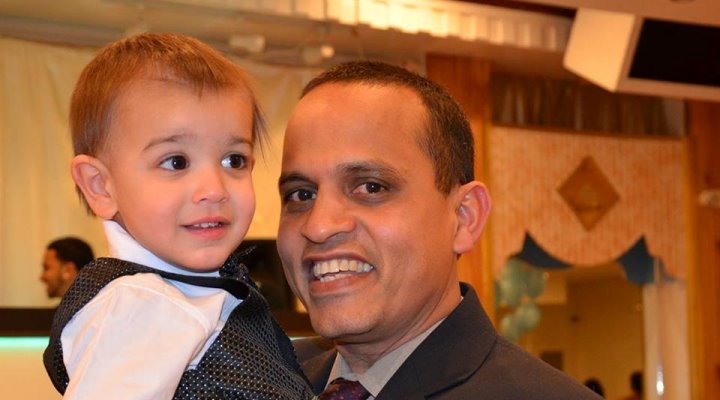 Before 1990, Arnold Budhram lived a life rich in experiences and achievements as a competitive chess player. He was the first player from Guyana to compete at the international Chess Olympiad along with players like Alexander Kasparov. It wasn’t long after he returned before he achieved a position high in the Guyana Chess Federation, helping other active players along the way. All of the skills he learned through chess have followed him into life.

In 1990 Arnold Budhram made a life-altering decision to move from his home country of Guyana to the United States of America. As a new immigrant, he realized he would have to give up chess as he could not split his time effectively between his beloved game and his desire to achieve his goals. For years Budhram worked at a bank during the week and worked as a contractor on weekends. Although working seven days a week for years was stressful, it allowed him to support his family and achieve his life-long goals.

After a few years of this hectic work schedule, Arnold Budhram decided to pursue his passion for carpentry full time. He created his own company, Arnibina Home Improvements Inc. and dedicated himself to becoming a lifelong contractor for every one of his clients. He built his company on the resolve to create a better contracting network and company for his people to work with. Between hard work and dedication, Arnold Budhram was able to achieve this effectively. In time, he realized he had reached a point in his life where maintaining a company was more than he needed. Careful and persistent encouragement from a dear friend led him to pursue a different path, yet again, as an independent contractor.

Arnold Budhram’s greatest professional pride comes from a job well done. That means making everyone around him happy with the results of his efforts, even if it means doing work above and beyond the original request. Being close to home and working for companies he enjoys being a part of brings him genuine satisfaction.

When Budhram is not working, he enjoys spending time with his wife and helping their son choose a college. Together they play ping pong, go bowling, and when possible, he still plays chess.

How did you get started as an independent contractor? What inspired you to make this change?

Over the years of working with subcontractors and in construction, I was blessed to meet a specific friend. He knew how hard I worked and what I enjoyed doing. Like me, he started working with a primary job while becoming a subcontractor. His unique skills and adherence to high standards made him an easy person to be friends with. In that time, he began to comment about how I should work with him for a company that employed him as an independent contractor. However, this meant that I would not have enough time to run my own business. Eight years of this persistent encouragement led me to make the change. I contacted this company and they made me an incredible offer that put me much closer to home with steady pay and excellent health benefits. I couldn’t refuse, and I am so glad I didn’t.

When you were starting out, was there ever a time you doubted this was the right choice? If so, how did you handle that?

Of course I had doubts that I would succeed with my own business but I knew that I could not go on much longer working 7 days a week. With the encouragement of my friends and family, I was able to dive into my own business and become profitable quickly. Since I already did some construction on weekends, I knew a lot of qualified professionals who helped me with my own business. They are hard workers, so I never doubted that the quality of our work would be great. I was mostly worried about not having enough jobs. Thankfully that was not an issue!

As for switching from owning my own business to being an independent contractor, the transition was slow. But eventually I received an offer for recurring jobs and I could not turn it down. My family and I are very happy with this decision.

I would say that the most difficult decision I am actively trying to make is a personal one. I am helping my son pick a school for college. We have reviewed many options and narrowed it down to two locations. While we have made some good progress, we have not been able to settle on one or the other. We are going to need all the time we have left to decide. Thankfully, we have another year.

As for professionally, a frequent tough decision is deciding what jobs to take over others. Sometimes a job takes longer than you thought and you must turn down other gigs, even if you really want them. Sometimes it’s impossible to double up and do two jobs at once!

I believe what makes me successful is related to my patience, creativity, and problem-solving. I believe my experience as a chess player installed these qualities within me from a young age. These qualities were crucial when I was building my own company. When I began, many people feared contractors and didn’t trust them to do the best possible job for them. I set about changing that when people encountered me. I wanted to become everyone’s family contractor. Like a family doctor, I wanted them to know they could trust me to do what was best for them in the most effective possible way.

There is nothing like seeing the joy on a person’s face when you have finished a job in a timely manner and in a way that makes everyone in the family happy. When I visit an office to complete a request ticket, and I see other things that need to be fixed, it’s a joy to finish it and make someone’s work environment that much better by the task.

When the company began one of my biggest goals was to pay off our family home. It was incredibly satisfying when I was able to get the deed to our house without a lean on it. I worked hard for it and earned it and achieved it. It may have taken me working seven days a week for a time, but it was well worth it.

I am now in a position where I can look forward to retirement. While I am not looking forward to doing this any time soon, I can now actually consider it (whereas when I was working seven days a week I never thought retirement would come!). I’ve begun planning for a time when I can buy a home in Florida with a workshop in the back. It’ll be filled with tools for crafting and woodworking. One thing I would enjoy creating is chess pieces of my own design. This would also be a great place where my son and his future family can visit.

This is a difficult question for me to answer. I have found the books that I read over the years come back to the same two topics. One of the topics is chess, and the other is carpentry. I do not believe the books that I find interesting and enlightening will be something everyone would read with the same impression.

What is a recent purchase you have made that helped with your career?

I have collected many tools of the years, and many of my friends gift me tools when they are trying to make space for their new “technologically advanced” toys. I’m old school so I like the tools that allow you to do the work with your hands, instead of doing it for you! So I have not purchased tools recently, but I did purchase a new car. This makes getting to work and back home easier and quicker, which means I have more time for my family, and that’s the most important thing to me.