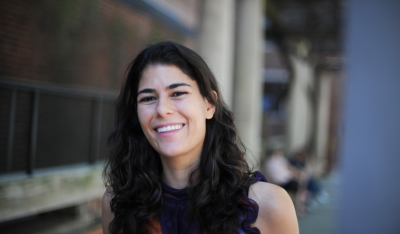 Alison Perelman is the Executive Director of Philadelphia 3.0, an organization that drives political reform in Philadelphia local politics. In this role, Alison oversaw a 2015 campaign operation that supported seven independent-minded candidates for Philadelphia City Council, the first independent expenditure of its kind in Philadelphia. Going up against entrenched political interests, Philadelphia 3.0 helped elect three City Council members, scoring a better record than the party machines in these races. In 2016, during its “offseason,” Philly 3.0 shifted to a greater focus on reform and good government advocacy. In this role, Philly 3.0 built a coalition calling for the elimination of the City Commissioners row office and is pushing for the streamlining of bureaucratic and administrative processes that hurt new business development in the city.

Prior to running Philadelphia 3.0, Alison was a legislative aide to former City Councilman Bill Green, where she focused on tax reform, principally business tax reform, and public health initiatives. Alison’s first role in Philadelphia City Hall was as an inaugural member of City Council Policy and Research Fellows program. Alison is a graduate of Princeton University and received a PhD in Communication from the University of Pennsylvania. Her dissertation analyzed the way presidential candidates mobilize personal tastes and behaviors to shape a favorable public persona. She lives in Philadelphia with her wife and son.

When I was entering the final stages of my dissertation process, I had to decide whether I wanted to stay in academia. I realized that, even more than communications or politics, I was compelled by a need to help the City of Philadelphia come closer to reaching its potential. Once I made this decision, I applied to the inaugural class of City Council Policy and Research Fellows. In this role, I had significant exposure to the way the City Council works, its opportunities and limitations. From there I applied to work for a City Council person I admired, At Large Councilman Bill Green. I was brought on board as a legislative aide and grew from there.

What inspired you to start this organization?

Philadelphia 3.0 was an idea germinated by a cohort of civic and business leaders in Philadelphia who believed strongly that the city deserved better and more innovative political leadership. I was brought on as the founding Executive Director to build the organization and advance its mission.

How long did it take for you to become successful?

I’m not sure how I would define success, though I’m certainly very proud of the work we have done. We are, every day, defining a new model of political engagement in Philadelphia; this work is both incremental and transformative, and the fact that we pushed so far beyond the established comfort zone in Philadelphia is a sign of our achievement.

When you’re building the plane as you fly it, there are, of course, many moments of doubt. And it was unquestionably the case that many people in our world expected failure. But the fact that we continue to do important work that has a meaningful impact, is reassuring in moments of uncertainty.

What is one PR or marketing strategy that you’re using that works really well?

Our Director of Engagement, Jon Geeting, is one of the most effective communications professionals in Philadelphia. He has mobilized our platforms to drive our followers to the interest areas that matter most to them. To that end, our supporters who are most interested in general updates, receive a summary of all bills introduced that week and a separate weekly newsletter featuring our original content. On the other hand, we have developed a niche and wonky events program that appeals to people in specific industries. The combination of the general and the specific has worked very well for us.

We are a small, nimble organization. Even so, as we moved out of electoral mode and into an advocacy agenda there were a couple false starts. The toughest challenge during this time was identifying the best approach for achieving our political aims. Campaigns are extremely difficult but are also quite structured. In the post-election context, I had to engage in some pretty significant strategic planning to determine the best way to orient the organization. I had to answer some questions of priorities, process, and personnel. We are doing some of our best work now, so it paid off.

I identify more strongly as a Philadelphian than anything else, and that passion for and commitment to the city is the most important ingredient in the organization’s success. It’s easy to be a political mercenary without a concern for a deeper and more fundamental mission. My clear sense of why I’m doing what I’m doing makes the work come more easily. And by surrounding myself with colleagues and partners that feel the same way, I have positioned Philly 3.0 to benefit from benefit from a tailwind of mission alignment.

What has been your most satisfying moment?

When you’re building the plane as you fly it there are many satisfying moments that reinforce your strategy and decision-making. I am so proud of the work we’re doing now, and we got to this place without any models to look to for guidance. Campaigns largely break down after the election. And most advocacy organizations push for issues, not candidates. Combining candidate and issue advocacy with in-cycle and out-of-cycle work makes us different than anyone else in our space in Philadelphia. The day-to-day moments that prove that our model is working are extremely satisfying. And even our most ardent detractors seems to have gotten the message that we’re here for good.

What does the future hold for your organization?

We have an exciting—and uncharted—next few years. In 2017, we will continue to build on our reform advocacy work. We will also begin a more serious effort to target and recruit candidates for the 2019 City Council race. In 2018, we will work with those candidates to get them best positioned to run for Council. We will also, in keeping with our reform agenda, push for term limits for City Council. 2019 is game time. We will support a slate of independent-minded candidates for City Council. Then the cycle repeats until 2023, by which point we hope to have helped elect enough smart, effective Council members that the expectations for our political representation will have been raised.

Following the 2016 presidential election, there has been a surge in interest, principally among younger Philadelphians, in becoming engaged in their political system. Some of these people are even expressing interest in running for local office, which is hugely exiting. In an effort to point this excitement toward an achievable end, Philadelphia 3.0 is hosting a pair of workshops to teach, in a very tactical way, how to run for committee person seats. Committee people are the political block captains of their neighborhoods, and it only takes a couple dozen votes to win races for the position. It’s the best onramp to the political system in Philadelphia, and we’re excited to get a new crop of young people into these seats.