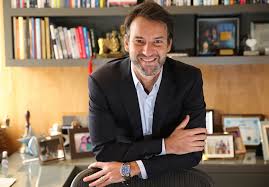 Eduardo Sirotsky Melzer (Duda Melzer) is a Brazilian entrepreneur and successful businessman. He served as the CEO for Grupo RBS, one of the largest media conglomerates in South America. He has since stepped down from day-to-day operations, he remains the Chairman and President of Grupo RBS. Instead, Duda Melzer focuses attention on EB Ventures, an early-stage venture capital and private equity firm he created during his time at Grupo RBS.

Among his awards, Duda Melzer was named Entrepreneur of the Year in 2015 in Ernst & Young’s family business category. In the same year, he was also selected to join the Cambridge Institute for Family Enterprise’s list of leaders.

My days start early and with a workout, typically at 5 AM. I begin my day early this way to guarantee that my energy, focus, and disposition is balanced. No matter how much I plan, my workdays are unpredictable. Issues pop up all the time, and I have to have the flexibility to address them.

At the end of each day, my goal is to finish my day at home with my family. My motivation and productivity are a product of balancing sports, work, and time with family.

I surround myself with trusted people. One person can’t do everything by themselves, so I seek to work with brilliant people who can mitigate my weaknesses. Being able to delegate difficult projects and have the confidence that they’ll succeed is huge for scaling up and efficiency.

Develop relationships. This ranges from forming connections with your team members, but also other people, companies, and teams you work with. I believe in completing work efficiently. Forming relationships with key stakeholders helps get things done faster.

Doing them! Good ideas are fantastic, but they remain ideas if people don’t act on them. At EB capital, we care about making ideas a reality, which requires uniting a group of smart people around an idea so that we all paddle in the same direction.

How companies are realizing that profitability and purpose are not mutually exclusive. In fact, I think that if a company has a strong purpose or mission, it helps them boost their revenue. The two ideas reinforce and boost each other.

Don’t give up easily. “No” is not the end of the line. Every successful entrepreneur had to struggle to bring their vision to life, which means you have to too. Keep trying, believe in your vision, and surround yourself with trusted teammates.

Tell us something that’s true that almost nobody agrees with you on.

Proving me wrong is not a bad thing! Believe it or not, I surround myself with people who help me make more informed decisions. I want to hear facts that contradict my opinion. It’s part of the process of learning. My goal isn’t to work in a silo.

Building a team you can delegate work to. I can’t master every aspect of running a business, which is why I surround myself with people who are far better at certain tasks than I am. Handing off a tough project and knowing that the teammate can do a better job than me allows me to focus on the tasks that I am good at.

Early in my career at Grupo RBS, there was a trend where all the media companies were trying to embrace technology. Part of it was because Google and Facebook started focusing their attentions in Brazil, eating into our customer base. I tried to compete with technology giants at their own game. Predictably, we didn’t do so well. We had to sell out of the endeavor, but I learned a valuable lesson along the way. Grupo RBS is fantastic at running and managing companies. If we never tried took this step, then I don’t think I would have had the inspiration to start EB Ventures.

What is one piece of software or a web service that helps you be productive? How do you use it?

I like to keep organized on the go, so I use apps on my phone. Two of the most used apps on my phone is my calendar and the iPhone note-taking apps. I know, it’s not the most glamorous of tools, but it’s an easy way for me to organize my thoughts when I juggle so much each day. If I didn’t have these apps, I would probably be jotting all of this down into a notebook.

“Originals,” by Adam Grant. It’s a book that almost echoes my mentality. The book itself sends a message about how people have no limits if they doggedly pursue their dreams. It’s a story of not giving up, and that’s something I identify with.

My grandfather, Maurício Sirotsky Sobrinho, who originally founded my family company Grupo RBS, had a phrase that I am very fond of. “Keep your eyes open to this accelerated, accompanying technological development, without losing sight of the human dimension.” It’s especially relevant today with technology being ubiquitous.