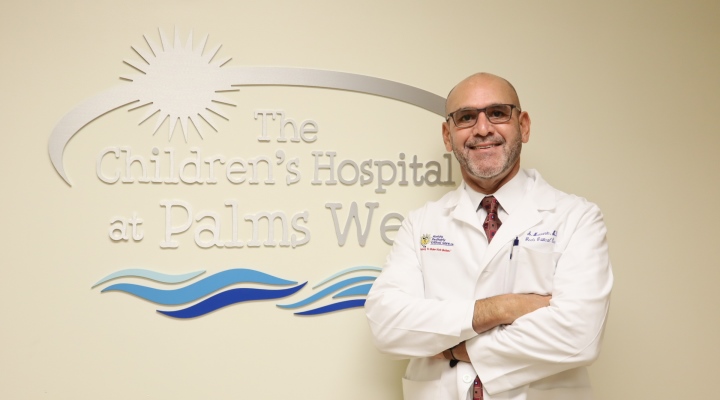 Dr. Alberto Marante, MD is a Pediatric Intensive Care Physician in Palm Beach County, Florida, where he has been for almost 30 years. The last 23 years he has been focused on creating and building his own brand by securing hospital contracts with multiple institutions.

Before that, Dr. Alberto Marante was recruited into a relatively small hospital in a suburban community in Palm Beach County to develop and start a new pediatric service. Almost single handedly and with great effort, he created and built the children’s hospital at his current facility, which includes full services such as a pediatric ICU and multiple pediatric specialties. Dr. Alberto Marante’s facility also became a teaching program where medical students and physicians are trained to become pediatric, family practice and emergency room physicians.

As a result of all that, Alberto was asked to expand the brand to other facilities and to open new pediatric programs and services, in some cases, in other states. He sits as a consultant to help them identify their needs to develop these new programs. As well, Dr. Marante is involved in managing and staffing some of these that could be some 160 miles away.

The free time that he does find is spent with his two young children as well as ski trips or cruises with his wife and family. Being a history buff, Alberto Marante, MD does enjoy down time just to watch history programs on television.

I think it was because it was a family tradition, both of my parents were physicians and my mother was a Chief Medical Officer at the children’s hospital. Both of them eventually became family doctors. I grew to respect and admire their work, and I felt that that was a calling for me, that’s what I wanted to do with my career. I love working with children, so I became very interested in pediatrics, because I felt it would be a very rewarding career in taking care of children. I just love kids.

Once I began my training, the intensive care environment really interested me, because I felt that just from the scientific point of view, that was the kind of challenge that I was interested in. It was very intriguing to me to work in that environment and I also felt that I could do the most good for my patients in that environment. I didn’t see myself working in a pediatric office seeing patients every 10 minutes, or routine things. In an ICU environment, it’s much more engaging for me.

My typical routine, every day when I get up, I help my wife get the kids ready for school, then I usually bike to school with my son, while she gets our daughter ready to go to her school. Then I go to work. A big part of my day is doing rounds in the hospital. I usually do rounds with medical students and residents where I conduct teaching rounds with them. Often, I do procedures such as anesthesia, where I actually provide anesthesia for imaging procedures for children that can’t stay still. For example, if a patient has to have an outpatient MRI, they have to hold still for about an hour, so I have to put them on anesthesia. That consumes a fair amount of my day, too.

I have an older son from a previous marriage who is an attorney in town, and we’ll meet for lunch about four times a week. Then, two or three times a week I try to go to the gym, early in the afternoon, depending on how busy the day or week I have.

With my kids, we do homework, play games, help out with some chores. We generally have a family dinner, then I spend time with my wife catching up on the day, things that we need to talk about. Then spend a little down time with the kids watching TV with them or reading. Then it’s bedtime for the children. I get a couple of hours for private time and so does my wife, then it’s time to go to bed. I usually spend an hour or so going through mail, catching up with bills and things. Twice a week my wife and I try to have a date where we can go out to dinner and have some time for ourselves.

When you look forward to your career, what trend in medicine do you see impacting your specialty the most? Is this for the better or for the worse, and why is that the case?

I think there are multiple factors that are impacting my particular line of work today. One, I think is the healthcare system in the country has deteriorated significantly over the years. The Affordable Care Act really impacted our line of work very, very seriously. What that does is make challenges to being able to provide better care, but with less efficiency.

At this point, somebody like me who runs a relatively small practice, compared to some big national entity, finds it challenging to be able to afford the number of physicians and providers that I need to run the practice. It’s becoming increasingly difficult for me, I find myself working harder, asking myself why? That’s the first factor.

The second factor is the amount of liability involved in this field. There’s been a number of medical malpractice cases that I’ve been involved with that I felt it was nothing that I did wrong. It was just the way that things happened. I was the fall guy in one case and it was very detrimental not for me personally, but also for my family, and something that still affects me today. That’s creating a lot of tension, friction between the hospitals and the physicians, and it’s extremely frustrating.

I’m a dying breed in the sense that in the old days physicians went to school, they could make their own decisions as to how they wanted to practice. They could focus on patient care. You came out of medical school, you did your training, found an office space, and you were open for business.  These days, that practice model is dying, there’s very few physicians that could even afford to follow that model. Most of the physicians these days join large medical practices and it becomes employee decisions. They function, basically, according to government algorithms of how to deliver care, which may not necessarily be the best thing for the patient. More and more we’re being told what to do with the patients rather than what we think we should with the patients.

Up until now I had a private practice and over the years, I’ve employed approximately 20 to 25 providers including physicians and nurse practitioners, and practice managers. People have come and gone. We’ve been able to employ a number of people that all have lives and families. The writing is on the wall, where now you have to take national entities that are coming up and they’re basically taking over these hospital facilities.

I love my patients, the kids. I love being able to make a difference. When I see a very sick kid that is struggling, literally between life and death, it’s like the very fine-tuning of a musical instrument, you’re constantly doing that. It’s really an art and a lot of science behind it, but being able to recognize the signs and symptoms and the meaning of all these things that you’re looking at. You’re presented with a lot of data and you’re also presented with a lot of signs that are maybe statistical signs that makes it hard to recognize. When you’re able to put all the puzzle pieces together, and make a difference for your patients, and that patient walks out of the hospital, I think that’s where I get the most satisfaction.

I don’t know if I have just one, I think I have several. I would have to say probably the greatest accomplishment in my career that I can think of is the way it has translated over the years.

26 years ago, I had the privilege of taking care of this girl that came from the Bahamas. I still remember getting the phone call from the emergency room that they were bringing this girl in. We’re in Palm Beach, almost a stone’s throw from the chain of islands in the Bahamas. I got the call, she was 13, and had toxic shock syndrome. She was critically ill when I saw her, to the point that she had three episodes of cardiac arrest and had to be resuscitated.  Over several months she underwent a number of very serious procedures and it took months, if not years to recover. I was involved with her care as well as her family, and we became personal friends. Eventually, she got married and I was invited to the wedding. She become a mother of three, wanted me to be the pediatrician for each of them. Her family and I have remained very close over the years.

I’m very proud of what I’ve done over the years at this facility. I created a children’s hospital from scratch by force of will and a lot of support from the community. I’ve been told, “If it wasn’t for you, this place wouldn’t be here today.”  To date, we’ve graduated 49 pediatricians that are practicing all over the country, I think that’s one of my proudest accomplishments.

Can you share some of your volunteer activities with our readers?

With the work that I do in the intensive care environment, there’s not enough hours in the day. With that said, most of my volunteer work has been involved with medical education. I’ve done some community outreach programs. I actually provide a lot of care to indigent patients, lot of migrant patients that have no health insurance.

Go on trips and disconnect. My family and my kids help me disconnect from work. I have my man cave outside on my patio with a TV, and that’s when I disconnect at night, just immerse myself in the program I’m watching.

Where do you want to be in your career in five years?

I think I’d like to still be doing some clinical work, not as hard as I’m working now, though. I want to have more time for myself and my family, and not have to worry about answering phone calls in the middle of the night. I’d like to be involved in medical education, I think that’s a way for me to give back. I would prefer to be in some sort of medical administrative role. If I have more time, I’d like to take on some personal projects of mine, things around the house like putting up a shelf or finishing a drawer that’s been sitting for weeks. Gardening is another interest of mine.